Amidst All the (Well-Deserved) Encomia for Sen. Frank Lautenberg,

Tom Moran at the Star-Ledger has a slightly different take:

And now, as great a warrior as  [Sen. Lautenberg] has been all these years for the Democratic Party, the decision to stick it out this long has handed a potent weapon to his Republican nemesis, Gov. Chris Christie.

Christie now has the power to appoint a replacement for Lautenberg to serve until November of 2014. Had Lautenberg stepped down a few months ago, Christie would have had to call an election this year instead. That, anyway, is the legal opinion of the nonpartisan Office of Legislative Services.

The irony is thick: Lautenberg was a true-believing liberal who threw his fortune into the fight, and literally worked to his death pushing the cause. Even at the very end, he scored big last week by winning bipartisan approval for a bill to regulate chemicals in the environment.

No doubt, it would pain Lautenberg to know he’s handed this privilege to Christie, a man he once called “the king of liars.”

Names rumored to be on Christie’s short list  include Sens. Bill Baroni, Tom Kean Jr. or his father, Joe  Kyrillos, Assemblyman Jon Bramnick, and Lt. Gov. Kim Guadegno. Everyone assumes that, one way or another, this is all headed for court

There’s one educational angle to this political balagan:

If Cory Booker were to leave his mayoral post in Newark early in order to replace Lautenberg through a special election (or an added contest on the November ballot) the front-runner for Booker’s Newark replacement would be Ras Baraka, Newark City Council member and principal of Central High School. (I’ve never figured out how he fulfills both sets of responsibilities.) Currently, Newark City Council, dysfunctional to the point of being incapable of choosing a president (see Lisa Fleisher’s piece today in the Wall St. Journal), is wholly opposed to Newark Superintendent Cami Anderson and the reforms she supports, like cooperating with charter schools and insisting on higher standards for administrators, teachers, and students.

Cory Booker, of course, is a valiant education reformer and a big supporter of Anderson. The Newark City Council and Ras Baraka? Not so much.

From a Star-Ledger piece last month:

The Newark City Council voted unanimously Wednesday for a moratorium on all public school initiatives just a week after the school advisory board issued a vote of no-confidence in Newark Superintendent Cami Anderson.
“There have been serious decisions that have been made that will affect this community for decades and have no basis in research or empirical data,” said mayoral candidate and South Ward Councilman Ras Baraka, who sponsored the resolution.

In other words, the future mayor of Newark is most likely a politician resolutely opposed to basic tenets of education reform and not averse to highly-charged rhetoric. Last year the Star-Ledger awarded him the Knucklehead of the Week award for comparing Cory Booker to a Nazi after a controversial appointment of a new council member.

(He didn’t lick the inclination for slander off the floor.  Baraka is the son of Amiri Baraka, who wrote an anti-Semitic poem that blamed Jews for the terrorist attack on September 11th, 2001. [Irony alert!] At the time Pere Baraka was Poet Laureate of NJ. Jim McGreevey tried to get him to resign. After he refused, the NJ Legislature eliminated the position. )

However this proceeds, Newark is likely to have a mayor ardently opposed to education reform.

We’d Rather Be in Philadelphia 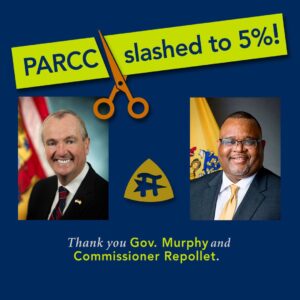 Why Mark Rynone Left Corporate to Help Kids With Special