NJ Spotlight looks at the “fine details” of the recent court ruling regarding NJ’s habit of placing way too many kids with disabilities in restrictive placements. The decision also orders NJ to take corrective action to address the disproportionate number of minority students who get sent out-of-district. Link to decisions through a sidebar to the article.


Amid the nasty mayoral contest in Newark between Ras Baraka and Shavar Jeffires, reports the Star Ledger,  Jeffries put out his education plan. (Baraka put out his earlier in the week.)

Jeffries railed against the approximate 50 percent graduation rate in Newark’s high schools, as well as the fact that 9 out of 10 Newark students who reach college require remedial instruction to catch up with their peers.
“In the modern economy this is catastrophic,” Jeffries said, calling for a world-class, free education for all of Newark’s children.

Lakewood Public Schools wants the state to bail them out of their $5 million budget deficit. And Moorestown has a $4 million hole.

From The Record: “[Paterson] City schools Superintendent Donnie Evans is imposing a hiring freeze on “non-essential positions” as part of his effort to cut spending on district office staff by 25 percent by the end of June.”

The NJ Business and Industry Association is only one of the groups bothered by the country’s disparagement of vocational education. From NJ Spotlight: “The bottom line is jobs are going unfilled in New Jersey because employers cannot find workers with the right skills,” said Melanie Willoughby, senior vice president of the NJBIA. Sen. Steve Sweeney, a former ironworker, said “Schools steer kids away from vocational schools, but the reason they are so important is every job is valuable and important. Schools often think about their scores and who goes to this or that (college), rather than what is the best fit for the student.“ Also see coverage from Press of Atlantic City.

The South Jersey Times Editorial Board urges new legislation that would restrict school boards’ ability to put referenda on the ballot: “If a capital expenditure truly merits a bond issue, let it appear on the annual school election ballot where it belongs. If voters say “no,” make it so the expenditure can’t return until the following year. These totally unnecessary pop-up referenda to authorize more school spending must be abolished.”

From the Jersey Journal: “The Jersey City Board of Education misinformed and disenfranchised the public last month when it curtailed public comment at school board meetings, three vocal district critics say in a civil lawsuit filed yesterday.”

I awarded a Quote of the Day last week to Steve Sweeney for expressing support for NJ’s Interdistrict Public School Choice Program. His quote came from a NJ Spotlight piece describing  pleas from schools enrolled in the NJ Interdistrict Public School Choice Program to lift the 5% enrollment increase cap implemented by the Christie Administration this year.  One commenter on the story (see comments section) says that the Interdistrict Public School Choice Association is “spinning the costs” that the state provides as incentives, and that most schools get more than advertised. Maggi Downham of the NJIPSCA argues that districts are indeed sharing services and looking at more consolidation ant that “the program is doing was it was intended to do: create competition for students that would close or force consolidation of poorly performing schools.”

. @TNTP‘s Tim Daly takes no prisoners – he says what everyone is saying behind the scenes: http://tntp.org/blog/post/union-leaders-put-common-core-in-the-cold … pic.twitter.com/lMO1MEAnjA 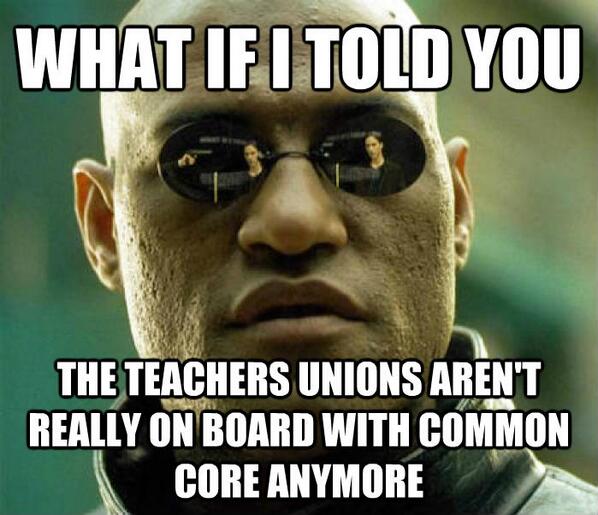 New Study: Newark Public Charter Schools Do Not ‘Push Out’

Inside Scoop from Politico on Genesis of Buono’s Final Talking