Surprised By the Lakewood FBI Arrests on Welfare Fraud? Don’t Be: Just Look at the Schools 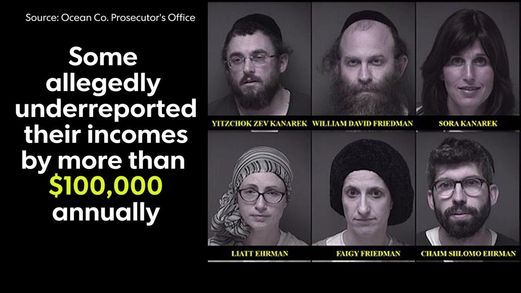 Lakewood was the subject of much media attention last week, from USA Today to the Wall Street Journal to the Associated Press. Why the sudden interest? Because FBI agents and county police began arresting local Haredim (ultra-Orthodox Jews) on charges of defrauding state and federal programs by claiming poverty and wrongfully collecting Medicaid, food stamps, SNAP, and SSI benefits, as well as evading property taxes that fund schools and municipal activities.

If you’re a regular reader of this blog, you know of Lakewood’s sordid history of shortchanging poor students of color trapped in dysfunctional schools run by a Board that privileges Orthodox children who attend private and unaccountable Jewish yeshivas. But these flagrant  abuses were never were enough to garner much publicity.  Is welfare fraud any different?

No. It’s a distinction without a difference.

Lakewood Public Schools, permeated by what Fiscal Monitor Michael Azzara has called a “culture of fear,” is a reflection of a city-wide culture that privileges Haredim over gentiles. (See this post for more on this.)  And Lakewood’s culture of corruption cheats non-Haredi residents in arenas as varied as tax collection, discriminatory housing, Medicaid and SSI allotments.

In other words, it’s not just the schools. It’s the whole city. Local control at its finest, at least if you’re an ultra-Orthodox Jew.

As of this past weekend, 14 people have been arrested in the welfare fraud investigation. The rumor mill says that numbers will climb far higher and, also, that Haredim are furiously calling state offices to get off lists of eligibility for government benefits in order to stave off prosecution..

But that’s just the way Lakewood does business, with nary a backward glance at the price paid by Latino (many undocumented, so unlikely to complain) and Black families who fruitlessly depend on the traditional district to educate their children.

One example from the Star-Ledger:

The rabbi of Congregation Lutzk, at 520 New Egypt Road, has been charged with his wife of second-degree theft by deception, and is accused of wrongfully collecting $338,642 in Medicaid, food stamp, Housing and Urban Development and Supplementary Security Income benefits between January 2009 and April 2014.

The couple live in a home built last year at a net value of $885,100, according to tax records. The home, which is owned by the synagogue and classified under “church and charitable property,” had a taxable value of $18,212.88 in 2016, records show.

But don’t take my word for it. Take the word of Rabbi Mike Moskowitz, a brave and moral man who spent years at an ultra-Orthodox Lakewood yeshiva (most likely Beth Medrash Govoha, the largest yeshiva in the country, although he doesn’t specify) and offers an insider’s view of life in Lakewood.

In this first-person account published last week in The Forward, Rabbi Moskowitz describes Lakewood’s culture of “systematic corruption.”  For example, when he, a newcomer, went to a Haredi bookstore to purchase some texts,

“The rabbi rang up the books, but the price changed when I took out my debit card. Unfamiliar with the custom of the city, I asked, ‘Is it a different price for cash and credit?’ ‘No, he said, ‘I just need to charge you tax if there is a record of it.’ Unfortunately, this was only the beginning.”

Rabbi Moskowitz then recounts his experience when he got a job working at a frum (Orthodox) gym as a personal trainer.

When I got the job, the owner asked me how I wanted to be paid. “The 1st and 15th?” I answered, not really understanding the question. “No. Do you want me to pre-tithe it for you?” He then explained how there was a wonderful outreach organization that would give him back 90% of a monthly “donation” he made to them in cash. He would get a deduction, no one would have to pay taxes or declare it as income, the organization could continue its “holy work” and I wouldn’t have to tithe it (give 10% of it to charity).

I was silent with disgust, and then it got worse. “Ask a shilah,” he said. “Everyone does it.” Out of curiosity, I called my local posek, or decisor. “Cheat!” he ruled with enthusiasm, as if it were a mitzvah.

Rabbi Moskowitz (who declined to follow the advice of the posek) ascribes the city-wide corruption among the ultra-Orthodox to “a rabbinically induced solipsistic coma” that turns “the government” into “the enemy that the yeshiva community is operating in.” This rings true to me, and truer to non-Haredi Lakewood residents who have described to me the Haredi-controlled municipal government’s practice of picking up trash for free at yeshivas but charging the public district, turning a blind eye to realtors who refuse to sell or rent domiciles to non-Jews, and rubber-stamping building variances submitted by yeshivas and Haredi-owned businesses that would never get taken seriously if submitted by non-Orthodox residents.

We worship local control in N.J. That’s why we have 591 school districts and 565 municipalities. But Lakewood is the exemplar of what happens when home rule outruns state and federal oversight: Disenfranchised residents (i.e., those not in the majority) get shafted while those on the inside reap rewards, legal and otherwise. This is why, for example, amending NJ charter school law to require approval by the majority of residents — a proposal endorsed by NJEA, Save Our Schools-NJ, and Education Law Center — is a DeVos-ish shortcut to shortchanging minority schoolchildren. This is why New Jersey’s ESSA plan must include meaningful measures of accountability. This is why the federal government must require intervention when a N.J., school, or those in any other state, falls short.