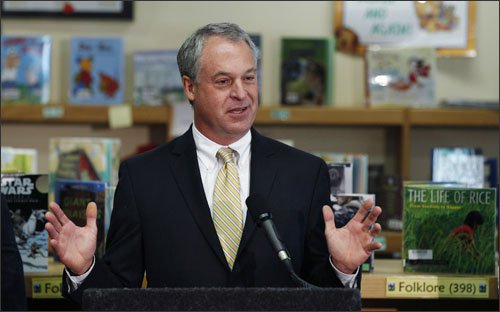 In an interview in today’s Star-Ledger, Newark Superintendent and former New Jersey Commissioner of Education Chris Cerf discusses the threat of a charter school moratorium, his views on “boutique” charter schools in leafy suburbs, why NJEA leaders and Save Our Schools-NJ fight so vociferously against public charters yet give discriminatory magnet schools (and their own access to school choice) a pass, the impending governorship of Phil Murphy, and how Newark charters are incubating new ideas and sharing them with traditional schools.

To add further context as Newark prepares to regain local control of its district,, two weeks ago the Star-Ledger interviewed Newark Mayor Ras Baraka, whose stance on alternatives to traditional Newark schools remains muddy at best. (See here, here, and here for my attempts at divination.) When asked about the impact of state control in this recent interview, he said, “The minute they took over, they began doing all this reform stuff. Teachers started becoming very leery of this stuff, it was one reform model after the next. And in two, three years it’s gone. All of it was top down. The charter stuff is really the last iteration of all the reform that’s supposed to take place in the district.”

So charter schools, which now enroll 31 percent of Newark public school children, 46 percent of them African-American, are merely “reform stuff”? Superintendent Cerf begs to differ. Here are a few highlights from the interview; I recommend you read the whole thing.

Star-Ledger: What do you think of the idea that charters siphon off resources from public schools?

Chris Cerf: It presumes charters are not public schools. But they are. They are publicly funded, open to all, tuition-free, accountable to democratically-elected authorities, and in New Jersey, not for-profit.

The only difference is that a charter is managed by a board of citizens, as opposed to a local school board. Secondly, charters receive only 90 percent of the per-pupil operating cost of a traditional public school, which means that for every student who leaves for a charter, the district retains 10 percent to cover its fixed expenses.

SL: Democrat Phil Murphy, who is likely to be elected governor, is skeptical about charter schools. Does that worry you?

CC:. His rhetoric worries me deeply. But I trust that as a democrat, the party that stands for racial justice and equality of opportunity, he will see that the right question is whether a public school is successful and equally available to all, not how it came into being.

SL:. Murphy said Gov. Christie has mishandled the charter school process, with new schools “dropping out of the sky.” Your take?

CC: Respectfully, he is incorrect. When I became commissioner of education, I worked extremely hard to make sure any charter school only had the privilege of operating if it was successful. I personally directed the closure of more than 10 percent of charters on the basis of their academic success, or lack thereof.

We also put in place accountability and screening systems that made it extremely difficult to get a charter. Something like 1 in 15 or 20 were actually granted.

SL: If Murphy supports a moratorium or a local vote, what would be the result in cities like Newark?

CC: It would hurt impoverished children, who are disproportionately children of color. About 31 percent go to charters, and about 46 percent of the African-American children go to charters.

They go only if they or their families have chosen to. And if you look at our kindergarten class this year, 50 percent of the children in Newark selected a charter as their first choice…Parents of means have lots of choices. If you look to the elected officials who are loudest about charter schools, their children often go to private school or to wealthy suburbs like Millburn or Livingston. It is ironic and inappropriate to say that parents who do not have the economic means to make that choice should be denied that choice.

I think charter schools are an anti-racist, egalitarian option for educational opportunity that has otherwise been wrongly denied to African-American parents.

I stay up at night wondering how otherwise good-hearted people could say they want to impose a moratorium or somehow stop the addition of charter schools, when so many children are choosing them and being successfully launched into adulthood on the basis of that choice.

The interest group in the state that spends by far the most money in Trenton, the teacher’s union, would be economically hurt by the increased number of charter schools because it would lose dues-paying members. I think this is a purely economic argument. They do not want to lose members. All their talk about creaming and hedge funds is just so much propaganda that they have focus grouped and determined works in the public debate.

SL: Do you worry that opposition in the suburbs might do political damage to the charter school movement and wind up limiting progress in cities?

CC: I look with astonishment at groups like Save Our Schools, highly represented by white wealthy suburbanites that have made it their mission to undermine the opportunity of poor African-American students to have access to quality education.

Many don’t honor their own principles by sending their children to private schools or living in leafy green suburbs. I ask myself whether the strength of their argument would be affected if the focus of charters did not include suburbs like Princeton.

Mostly, I’m aghast at seemingly progressive individuals who so deeply misunderstand the profound injury their position will cause families of vastly more limited means. Quote of The Day