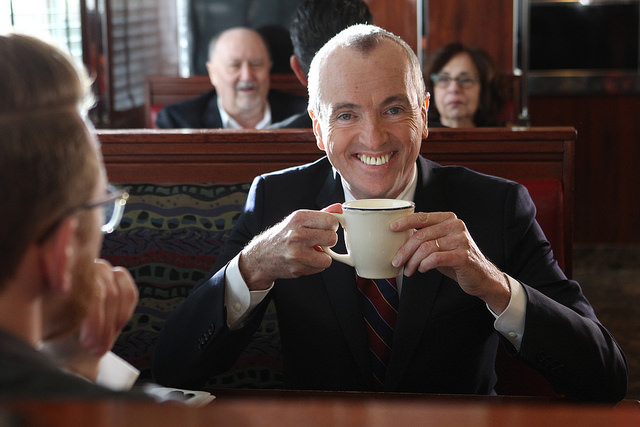 Last week AFT President Randi Weingarten hosted teachers from Newark, Perth Amboy, North Bergen, and Garfield for a meet-and-greet with gubernatorial shoo-ins Phil Murphy and his lieutenant governor running partner Sheila Oliver, reports Tapinto.  The purpose of the meeting was to give teachers opportunities to “share ideas for improving education and to voice their concerns regarding the current state of public education.”

Great. Except for this: our future state leaders need a little educating themselves. As a public service, here are corrections to two alternative facts, one proffered by Oliver and the other by Murphy.

Sheila Oliver is the former Assembly Speaker who bravely backed Steve Sweeney’s pension and health benefits reform bill at personal and political cost. When discussing school choice, she said this:

Oliver said that although she embraces all kinds of schools, funds should not be diverted away from public education.

“We can’t take funds out of district budgets to support them,” she said.

A little context. Oliver is a Newark native who graduated from Weequahic High School in 1970. Weequahic was once known as one of the best high schools in the country. According to a 2009 Star-Ledger elegy, the school, which counts among its alumni Philip Roth, graduated more future doctorates than any high school in America. But now, continues the Ledger,

Students now pass through metal detectors. The principal is shown putting on a bullet-proof vest under his Weequahic warm-up jacket. Gang members are everywhere.

I don’t know if Oliver has any kids or if she still lives in Newark, but if she does I doubt she’d send them to Weequahic. Many parents feel the same way: enrollment has dropped to just over 300 students. That is because Newark families hunger for seats in public charter schools that are, indeed, paid for through public school taxes and state aid. Oliver doesn’t want to “take funds out of district budgets” but in N.J. school aid passes from traditional schools to charters, just like special education out-of-district placements, which is a dumb and divisive way of funding alternative public schools. But that’s the law in New Jersey. Oliver knows this because she was in the Assembly when the 1995 charter school bill passed.

Should we change the law? Should the state collect all local school taxes, add in state aid, and distribute the revenue among our 591 school districts and the various public alternatives available to families? (Oy.) Maybe. Then let’s talk about that, not dis the choices made by current Newark families who overwhelming support a charter school sector that now educates 31 percent of Newark schoolchildren.

“We’ve gone from educating kids to testing kids,” he said. “We’re not teach-to-test believers; we want our kids to learn.”

Where to start? First, N.J. has been using standardized tests to assess student proficiency for 45 years. Federal law, known now as ESSA, or the Every Student Succeeds Act, mandates annual standardized testing in grades 3-8 and once in high school. We’ve tested kids for almost half a century and we have to test them.

Second, while Murphy has made one of his talking points the elimination of PARCC assessments (which replaced our obsolete ASK and HSPA tests) he has offered no alternative. Now that we’ve upgraded course content to better prepare students for college and careers, PARCC is aligned with what our children learn in school. ASK and HSPA are not aligned with what our children learn in school, although they are, sadly, responsible for misconceptions about student proficiency because they were way too easy; former Governor Jon Corzine’s Education Commissioner Lucille Davy used to refer to the HSPA, which students took in 11th grade, as “an eighth-grade level test.”

Get rid of PARCC? What should we replace it with? An unaligned test that makes grown-ups feel good but veils deficits in student proficiency? Murphy doesn’t say.

Third, good teachers don’t “teach to the test.” Good teachers know what kids need to learn and incorporate those goals into their curricula. All the hullabaloo over PARCC its first year — driven not by student need but by NJEA’s distaste for tying student outcomes to teacher evaluations — has died down. Opt-0ut rates this year are down throughout the state.

Are our “kids learning”? Yes. The first year of PARCC, like the first year of any new test, was rocky. But every consecutive year, as students gain exposure to updated course content, student proficiency has increased.

Jeez. It’s just a test. The kids are fine. The union leaders who resent objective metrics of effective instruction? Not so much.

I know it’s politics. I know that Murphy and Oliver have to say what they say in order to secure lobbyists’ funding and endorsements. But let’s try to keep our facts straight. Anyone Have Some Dragonglass?