“You Have to Ask — What is Going on Here?’’ The Canary is Dead in Lakewood 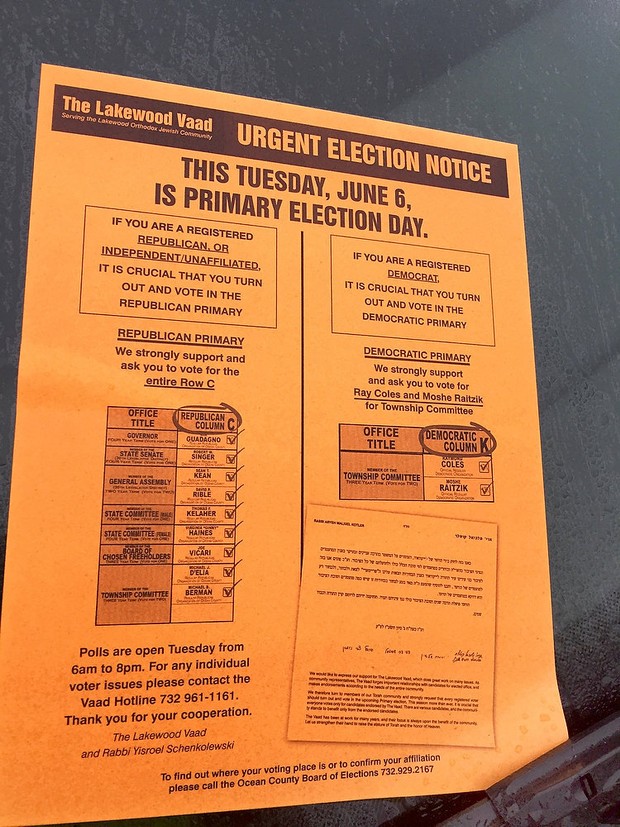 I’ve written much about Lakewood’s practice of privileging ultra-Orthodox Jewish schoolchildren, particularly those with special needs, over the school district’s almost entirely Latino and Black enrollment. This culture of inequity extends beyond public education services.   The school district’s practice of devoting disproportional funds to non-public school students who attend the 130 or so Jewish day schools and special education private schools that accept only Jewish students is merely the canary in the coal mine, an advanced sign of malice that signals greater degrees of discrimination throughout the city.

One example of this solipsism has been covered extensively in the media. In late June, twenty-six  ultra-Orthodox Lakewood residents were arrested for falsifying information in order to receive government benefits. All told, about $2 million was received fraudulently. More arrests are reportedly coming, even though two years ago the State gave Lakewood a heads-up that a bust was planned. Then last month the State Controller created  — solely for the benefit of Ocean County residents (Lakewood is Ocean County’s largest municipality) — the “Ocean County Recipient Voluntary Disclosure Program,” which offers amnesty to those who fess up to Medicaid fraud. And the State’s leniency appears to be directed not just at one county but at one constituency within that county.

From the Asbury Park Press:

State officials later confirmed to the Asbury Park Press that they consulted only one community group as the amnesty program was being formed: the Vaad, Lakewood’s politically influential council of local Orthodox Jewish religious and business leaders.

The Vaad is a committee of eleven ultra-Orthodox men who control the school board, members of the city council, and the county freeholders; they also have close ties with the 30th District’s Senator Robert Singer and Assemblyman Sean Kean.  (Singer’s Democratic challenger, Amy Cores, has  “called out Singer for his close financial ties to prominent Lakewood developers, such as the Kokes organization and a web of LLCs” and “has lambasted Singer for acquiescing to the status quo in Lakewood.”)

The Vaad operates,  according to this document, under “the spiritual guidance of the Roshei Yeshiva shlit”a, according to the vision set forth by Moreinu HaRav Aharon zt”l and Moreinu HaRav Shneur zt”l – which is to faithfully serve every member of the Lakewood community.”  One member, R’ Yossi Atlas, “mak[es] sure that there is a place for each child in the local mosdos [Jewish day schools].”  R’ Binyomin Heinemann “helps individuals in our Kehilla 30,000 times each year with social service matters, such as HUD, WIC, NJ Family Care, The Affordable Care Act (“Obamacare”), HEAP and more – making life affordable and practical for our families.” Rabbi Yitzchok Asher Rozsanski “is the liaison of the Vaad for Social Services and to the Ocean County Board of Health and to the County Freeholders. He helps individuals in this capacity and has also had a careful voice in helping assure policies by all facets of government that is friendly to the Lakewood Kehilla.” And so on.

How prevalent is benefits fraud in Lakewood?

The Los Angeles Times reports that more than half the population in Lakewood — 65,000 people — is on Medicaid. Lakewood “has more children with two parents receiving government benefits than any other municipality in New Jersey, including large, chronically depressed cities such as Newark and Camden.” New Jersey has a state fund of $34 million for catastrophic illnesses in children and last year Lakewood received 14 percent of that pot, even though only 2 percent of children statewide live in Lakewood. The Asbury Park Press found that the city has “29 times more grant recipients than any other town in New Jersey.”

From the LA Times:

“You have a family or six or seven or eight, somebody is paying the mortgage, somebody is paying the taxes, they have two cars in the driveway, they’ve got food for all the kids … and they’re reporting their total income at $10,000,’’ said Joseph Coronato, the Ocean County prosecutor who took the lead in the case. “You have to ask — what is going on here?’’

In one case unsealed by the court in June, a couple with six children is alleged to have reported their income at $39,000 per year — low enough to qualify for Medicaid — when in fact they were getting more than $1 million annually from a limited liability corporation.

But Lakewood residents who don’t have the keys to the kingdom — i.e., Black and Brown residents, many poor,  whose children attend Lakewood Public Schools, — are starting to speak out.

“Nothing to us at all. No one reached out,” said Alejandra Morales, president of La Voz Latina, which supports immigrant rights.

Pastor Glenn Wilson, whose church in Howell has a congregation of largely black and Latino worshipers who come from neighboring Lakewood and who heads the group Lakewood UNITE which advocates for public school students, said state officials didn’t contact him or church members – and he called the amnesty “a slap in the face to all people of all groups.”

“Amnesty is something you give to people who don’t know they were making a mistake. I have the same sense that the general public has that Medicaid fraud is probably not often done by mistake,” he said. “I know of people who were denied services for programs just by being over an income limit by a few dollars. The rules weren’t bent for them or by them.”

Mami Quinonez, a Lakewood resident of Puerto Rican descent, said that amnesty was offered to those who defer to the Vaad “because there are so many of them and their votes give them influence.”

“If an Afro-American, Puerto Rican, Mexican or Caucasian did what they did, we would be hung,” Quinonez said. “We would have went straight to the federal prison.”

“In the cities where you have a different racial makeup, they might have gun buyback programs, but those are open to anybody,” Rush said. “To be honest, when I heard there was Medicaid fraud amnesty for Ocean County, I thought it was a scam. Why would they do that? And why does it seem it’s geared to one religion?”

And this from Monique Judge at The Root:

So. Will this happen in a predominantly black town in New Jersey as well, or nah? Asking for black people everywhere.

I’d say the answer is “nah.” Those who kneel to the Vaad, not the New Jersey legal system, occupy a privileged position that is condoned at every level of governance. Largely immune from litigation and accountability, they reap benefits at the expense of others.

The primary victims are the non-Jewish children of Lakewood who attend a district that directs almost a third of its operating budget towards transportation and tuition for non-public school Orthodox children (some of whom attend schools that  don’t even qualify as schools), a district where 14 percent of third-graders read at grade level and 7 percent of high school students scored proficient in math.

In 2014 the State appointed a Fiscal Monitor to try to intervene because the district is perpetually under water. How’s that going? This past year the Board posted a $15 million budget deficit; the state bailed them out.  The next step is a state takeover, which might or might not quell the undue influence of the Vaad and the perpetual inequities visited upon minority students. The minority communities, as well as SAG, a group of concerned senior citizens, support this next level of intervention.  The ultra-Orthodox community leaders? Not so much. Why mess with a good thing? One test of the State’s commitment to educational and entitlement equity, to protecting the disenfranchised, is whether or not it can stand up to the Vaad.

The canary’s dead. The only hope for Lakewood’s non-Orthodox children and families who follow the law yet get nothing they deserve is a state takeover of the school district. But that will require elected officials who possess courage and integrity. At the moment, these qualities appear to be in short supply. Have I Got a Bargain For You…