When We Look Closer at the Results in Newark, the Arrow Is Unquestionably Pointed Up 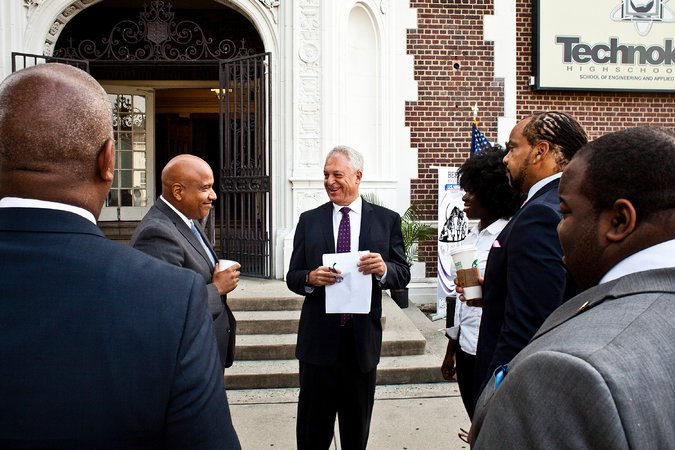 (This is a guest post by Newark Superintendent Chris Cerf.  Prior to becoming superintendent, he was appointed by Governor Chris Christie of New Jersey to serve as the state’s Commissioner of Education, beginning January 2011. As Acting Commissioner, he oversees 2,500 public schools, 1.4 million students, and 110,000 teachers in over 600 school districts.‪ This was originally published at Education Post.)

Neerav Kingsland, in my estimation, is one of the premier thinkers (and doers) in the field. His notion of “relinquishment” as an organizing strategy for district reform is justly recognized as a seminal contribution to the field and one that has long influenced me in my various posts, as deputy chancellor of New York City Public Schools, New Jersey’s commissioner of education, and now as superintendent of Newark Public Schools.

Sometimes, however, an intellectual allegiance to a theory can get in the way of a clear appreciation of facts that don’t quite fit the mold. Such is the case with Neerav’s recent blog post about the causes of our progress in Newark.

Comparing Newark to New Orleans, Neerav posits that a strategy of closing traditional schools and replacing them with a district comprising new, predominantly charter schools might have yielded even better results in Newark.

In support of this, he cites a recent Harvard study, ”Evaluating Newark’s Education Reforms,” that finds more than half of the significant English language arts (ELA) gains in Newark over the past five years can be attributed to students opting for a new or different school, as opposed to benefiting from improvements in their existing school. He then suggests (inaccurately in my view, as I’ll explain) that the study supports the point even more strongly when looking at students’ math scores.

So let’s look at the facts.

First, as Neerav acknowledges, even without the tragic influence of a table-clearing storm like Katrina, Newark boldly embraced a strategy of increasing the number of high-quality public schools by closing, restarting, and replacing failing schools with new schools, whether charter, magnet, or new traditional schools.

Notably, the strategy was indifferent to how a school came into being. Numerous unsuccessful charters were closed, as were about a dozen traditional schools. Through this process, the number of students attending charters more than doubled. Charters now serve 33 percent of the district’s K-12 children.

But more significantly, every family is now empowered to choose the public school that will serve them best (district, charter or magnet) through a centralized, equitable and politically neutral system called Newark Enrolls.

Interestingly, the recent growth in charters has not resulted in a corresponding reduction in traditional schools. In fact, energized by family choice and increasing academic performance, total public school enrollment in Newark has increased over time, and is higher than at any point in recent history.

More importantly, this focus on a unitary, governance-indifferent approach to public school options in the city corresponds with (and I believe contributed materially to) significant improvements in all sectors. For example, 36 percent of our high school students now attend a non-charter public school that exceeds the state average in reading and math—and let me proudly say that New Jersey always ranks among the top two or three states in the nation.

In elementary and middle school, the following chart says it all. Combining district and charter public schools, during this period Newark’s standing relative to comparable districts in the state leapt from the 33rd percentile to the 83rd percentile in math and from the 44th to the 81st in reading.

Figure 1: Newark (district and charter) progress in English language arts and math compared with similar districts in New Jersey (Newark falls into District Factor Group A, which outlines the 37 most economically disadvantaged districts).

But what if we just look at progress in traditional public schools? As the below chart shows, there were exciting gains in that sector as well—yet another compelling data point to suggest that the success of the charter sector did not come at the expense of traditional schools.

No single data point or study ever tells the full story about student progress—another point of disagreement I have with Neerav’s piece. (See this MarGrady study.) So what else do we know about Newark’s progress over the past half decade?

We can also now compare certain elements of Newark student outcomes to students in other states.

And what of the study Neerav cites as his only evidence?

The study is independent, rigorous, sophisticated, and sheds new and important light on the work in Newark. I am, of course, pleased with its positive and optimistic findings.

But I am also aware that every study is premised on modeling assumptions (such as which years to include), and those assumptions are often the subject of scholarly debate. Unquestionably, that is the case here.

For instance, the study does not include data from 2017, a year Newark’s students soared in math, considerably outpacing the state and comparable districts.

Similarly, since the study only looks to compare value-added scores from the beginning of the period with the end, it is highly dependent on the starting point. In 2010, Newark was outperforming comparables in math by a wide margin due to very positive results that year in the charter sector. At the end of the study period, Newark was still outpacing comparables, having successfully outperformed the state average in value-added in six of the seven years studied during the period.

Unlike Neerav, I would call that a “win.”

Taken as a whole, the arrow in Newark is unquestionably pointed up—among traditional schools, among charters, and, most relevantly, across the district as a whole without regard to “sector.” In my view, that is the right frame against which to measure success.

While all of us who work in urban education have much more to do to provide our students with the educational opportunity they deserve, Newark students are making steady and significant progress in the right direction. Newark is a city on the rise, with strong leadership and a newly-empowered school board. All of us are committed to continuing to improve the mosaic of schools we have here—be they traditional district, magnet, charter, county vocational or otherwise—to ensure that progress continues.

QOD: What Does Merryl Tisch’s Departure Mean for Ed Policy

So a Reporter says to Christie, “Will You Meet with

If Asbury Park Public Schools Were Charters, They’d Be Shut