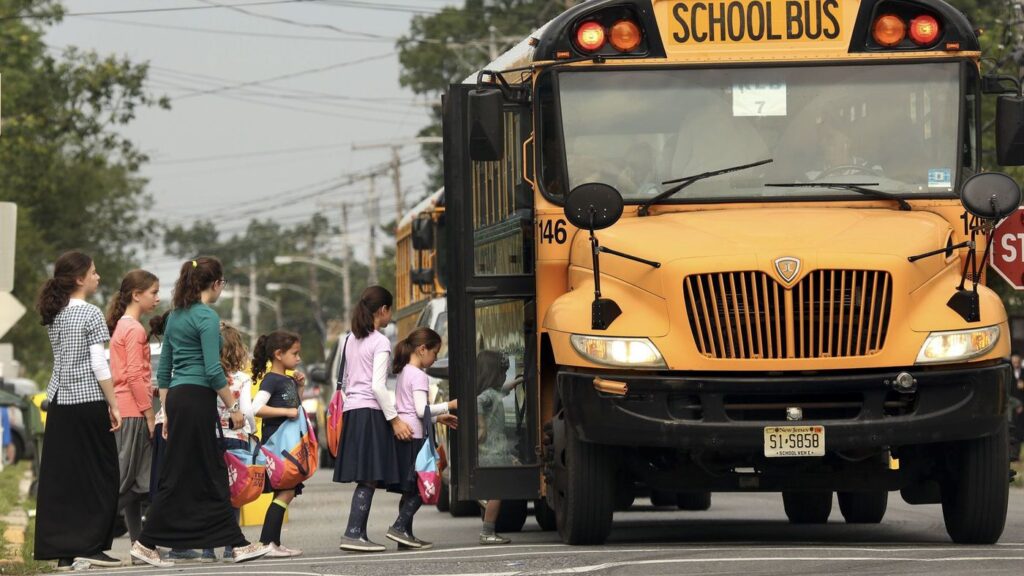 Last month Lakewood Superintendent Laura Winters sent a letter to Governor Phil Murphy asking for more state money because of “an anticipated shortfall between $14 and $20 million dollars for the 2018-2019 school year – which does not include staff raises or program changes.”  Without increased state aid, she says, Lakewood Public School students will receive “a tragically inadequate and inferior education.”

Nine days later the Lakewood Board of Education was notified of a federal lawsuit filed by Tobree Mostel, currently an assistant principal at one of the district’s elementary schools, who was demoted from her previous position as a special education central office administrator. From the lawsuit: “It appears that if one is not Orthodox Jewish, like the majority of the LBOE Board Members, and is not committed to diverting public school funds to benefit the local religious schools, that individual does not get to remain as an employee in the Lakewood School District.”

The timing of the two items — Winters’ letter and Mostel’s lawsuit — is coincidental. But the substance is correlative. Lakewood Public School District (LPSD) is fiscally wrecked for a number of reasons, but one is because the Board fires staff members who follow the law. If Gov. Murphy and the State Legislature fulfill Winters’ request (cc’d to the Lakewood School Board, Board Attorney Michael Inzelbuch, heads of the city’s 180 yeshivas, and others) they put the state in a compromising position, one of complicity in Lakewood’s scheme to funnel money towards non-public students at the expense of non-Orthodox public school students whose education is indeed “inadequate and inferior.”

LPSD receives $22 million a year in 192/193 grants. Chapter 192 funds are earmarked for compensatory education, English as a Second Language, and home instruction for non-public school students, i.e., students in private or parochial schools. Chapter 193 funds are earmarked for evaluations for eligibility for special education, supplementary instruction, and speech-language services for non-public school students. Mostel’s job was to ensure that the district was fully accountable for the $22 million it received from the state: that it was following laws and regulations, that the money was properly spent and audited, that all paperwork was clear and complete.

Mostel’s problem was that the district didn’t let her and her predecessors do their job.

And the State agrees.

According to a state audit of Lakewood covering the years 2011-2013, the state selected 48 non-public students as representative of the 274 who receive services paid for by 192/193 money (among other revenue like Title 1 and IDEA) in order to see if the district was “in accordance with service plans.” Here’s what the state auditors found:

What happened when the state auditors attempted to visit a yeshiva (unnamed) to see for themselves if non-public students were receiving services that the district had verified they were receiving?

We attempted to schedule a visit to one of the other nonpublic schools we initially visited to observe Chapter 192 and Chapter 193 services being administered, but there was a misunderstanding regarding the confirmation of our visit. After speaking with the school principal, we were told that visiting the school an hour later than we were scheduled would not be beneficial, as all services were ending and no classes were being held. Upon review of the vendor’s class schedules, there should have been 34 classes in session at the time we would have made the visit. Furthermore, the attendance records showed that several students were marked present in these classes at the time of the proposed visit.

In conclusion, the state found that LPSD’s “financial transactions…were not always reasonable.” There was a “lack of continuity in leadership in key administrative positions,” a reference to the short tenures of business and special ed administrators with integrity. Board approval of expenditures lacked “internal controls and proper oversight.” There were “numerous weaknesses related to payroll and personnel functions.”

Notably, the state “identified factors contributing to the general fund deficit” because “the district has not fully resolved the significant issues.” Money could be saved, particularly within the budget lines of non-public transportation and services for non-public students with disabilities. The audit concludes, “we have referred certain issues to the Division of Criminal Justice.”

These two items — transportation and special education costs for non-public students — are what Lakewood blames for its perpetual funding crisis.

This is where Tobree Mostel comes in. After the audit she was assigned to oversee 192/193 funding and discovered not much had changed, including excess billing as well as “questionable and unethical practices” by a vendor conducting student evaluations who “rewarded employees for producing evaluations that said that [non-public] students needed special services.” (A Star-Ledger article doesn’t name the vendor but 95 percent of non-public student evaluations are performed by a Lakewood company called On Track. Her federal suit names On Track as a defendant.) She also noted that the evaluations were “cut and pasted,” the inverse of what federal education law mandates.

In order to clear up these illegal practices, Mostel, according to the Star-Ledger, “brought these practices to the attention of the Board of Education in August 2016.

“She then started getting “attacked” by members of the school board, according to the notice.

“Almost immediately, false accusation and bogus complaints started materializing and being asserted by those connected either to the outside company or those who did not want to see the State laws and regulations concerning 193 funding being enforced,” the notice states.

The following February she announced at a Board meeting that evaluators had to test a student at least twice before the district allocated 192/193 funds. She also send a letter to the vendors with the same information.That very meeting “Mostel was unlawfully suspended from her job.”

Her responsibilities were handed to an ultra-Orthodox employee. (Mostel is Jewish but not ultra-Orthodox.) The Ledger: “Neither On Track nor Zlatkin responded to requests for comment. The school board’s current attorney, Michael Inzelbuch, also did not respond.”

A few other related items:

LPSD’s attorney Michael Inzelbuch’s  list of demands to the district in order for him to accept $600,000 a year plus generous benefits includes this:

Translation: all staff currently managing yeshiva students be transferred to other jobs.  Also, the Board must rehire several former board employees as “consultants” for the non-public, i.e., yeshiva sector. Inzelbuch says that these costs will be paid for by “non-designated public funds, not public funds” — although, of course, it’s all public funds because all the money comes from state taxpayers.

On Track still provides evaluations for non-public students. This contract lists the cost of an “initial evaluation” as $1273.12.

And here’s a public statement at a recent Lakewood School Board meeting from Michael Rush, a Lakewood resident, former superintendent and former special education supervisor in Toms River. It’s worth reading in its entirety but, in short, he says that yeshiva students eligible for special education are getting re-evaluated every year (at $1,200 a pop) instead of the state-mandated triennial cycle; that the district is prioritizing non-public students over public ones;  that a ‘complete audit” of 192/193 funds is in order; and that the state should take over the district..

Let’s get back to the letter from Superintendent Winters. Yes, according to New Jersey’s impossible-to-fund school funding formula (currently at a $2 billion deficit), Lakewood is underfunded. So are 376 other districts. If Gov. Murphy and the Legislature agree to give an unaccountable, ethically-compromised district an extra $20 million or so, they are complicit in Lakewood’s practice of, one, bilking state taxpayers of money and, two, privileging yeshiva students over public school students. The state has a choice. It can join in what Mostel’s lawyer calls a “travesty” or take over the district. This extreme step may be the only chance to make things right for 6,000 public school students who, every day receive, as Winters says,“a tragically inadequate and inferior education.”

Correcting the Record: Education Law Center Gets the Facts (and

The “Opt Out” Movement: Should Parents Boycott Standardized Tests?