(This is a guest post from the anonymous writer of the great school funding blog called New Jersey Education Aid. The writer notes that this is a preliminary look based on the Governor Phil Murphy’s proposed education budget, presented yesterday, that calls for a $283 million increase in aid to public schools.)

The budget address gives the amount of money Phil Murphy wants the state to spend in various categories.  It does not include the amount of state aid every district will get.  District-specific data will come out tomorrow, on Thursday, March 15th.  Murphy’s speech, by necessity, is light on details, but more information is available in the FY2019 “Budget in Brief.”

The budget assumes $1.7 billion from various tax increases that the legislature may not approve.  These tax increases of uncertain fate include raising the top income tax bracket to 10.75% (+$765 million), raising the sales tax to 7.0% and broadening it (+$581 million), “modernizing” corporate taxes (+$110 million), and taxing marijuana (+$80 million).  It also assumes savings from various health benefits reforms (- $118.7 million).

Despite the large increase from natural revenue growth and tax increases, Phil Murphy only proposes increasing K-12 aid by $283 million, saying that this will bring New Jersey to “full funding” in four years.

Murphy Spreads Confusion Over the Size of the Deficit
As before, Murphy is pretending in public that the deficit from SFRA [N.J.’s funding law called the School Funding Reform Act]  is only $1 billion, despite the existence of the State Aid Growth Limits that reduce the amount of aid a district can gain in a year. (The deficit is actually $2 million.)

Buried in the “Budget in Brief” is a tacit admittance that there is a difference between the statutory deficit (using that term) and the real Uncapped Aid deficit, “This budget represents year one of a four-year ramp-up to full statutory funding that will ensure every public school district has the resources needed to provide all of New Jersey’s children with the excellent education they deserve.” (See page 9.)

As welcome as this (obscure, tacit) concession is, the statute of SFRA itself is extremely flawed, since new aid is based on a district’s existing aid, not the district’s deficit, thereby giving the most under-aided districts the smallest increases.

It would be extremely unfair to make districts that are getting less than 50 percent of their Uncapped Aid to wait four years just to get a 10 or 20 percent increase in what they get now.

Also, Murphy’s FY2019 budget depends on new revenue from various tax increases and uses additional revenue from the temporary income tax surge NJ is enjoying. Since Murphy cannot pass a tax increase every year, and the income tax surge will taper off, this means that Murphy will not have enough money to increase K-12 aid by ~$280 million per year for the next three years.

This means that it is all the more important to phase out Adjustment Aid and start doing it NOW. [Adjustment Aid was intended to hold districts harmless at pre-SFRA state aid levels and then fade the extra money out. The fade-out never happened because the state has never been able to meet the fantastical aid targets of SFRA. See here for more.]

If 94 percent of districts are indeed gaining state aid and only 65 percent of NJ’s districts are under-aided, then Murphy is increasing state aid for numerous districts that are already over-aided.  We won’t know until Thursday what exactly he is doing, but it may be that he is undoing the cuts to Adjustment Aid that occurred in 2010, 2013, and 2017.

The percentage of the state’s budget going to education is at an all-time high of 42.1 percent. $14.95 billion plus $805.8 million in lottery money out of $37.4 billion, If you do not count the lottery money, the percentage is 40%, which would still be a record-high.

Huge Increase for School Construction (Probably for the Abbotts)

I don’t know exactly why there is going to be a tremendous increase in construction debt service. It was not predicted in recent State Debt Reports, so it is likely that Phil Murphy plans another round of Abbott construction bonding.

Flat-funding of Extraordinary Aid will be devastating for Lakewood.

Higher Ed funding (outside of communities colleges) is only increasing by 3 percent. In per student and inflation-adjusted terms, that’s flat funding at best.

NJ’s higher ed funding as a percentage of the budget is probably falling to a new low. 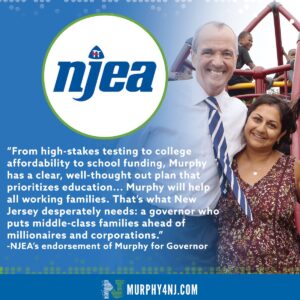 An Open Letter from NJEA Member to NJEA Leaders

An Apology to Phil Murphy, N.J’s Next Governor, Who Boldly