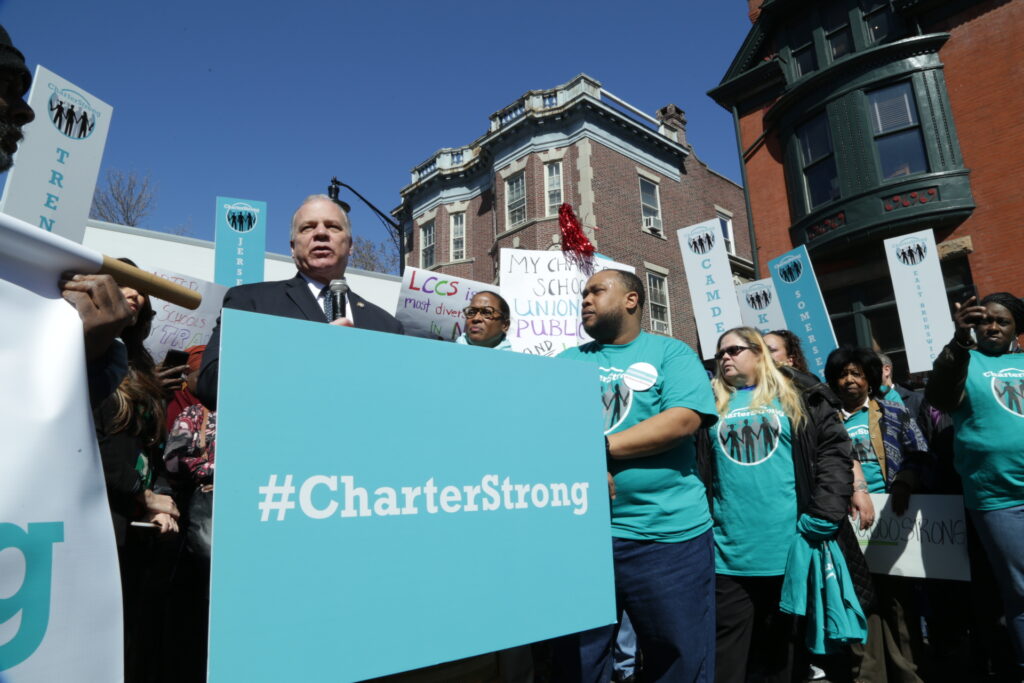 State Street in Trenton was hopping today! With the Senate and Assembly both in session on this bright chilly morning, NRA members gathered around the War Memorial to protest new gun control proposals, Lakewood attorney Michael Inzelbuch bussed in students to press the state for more money for non-public students, and Asbury Park residents gathered to support the confirmation of their former superintendent Lamont Repollet, nominated for State Education Commissioner.

But the loudest and largest crowd was there for a different reason: today was the #CharterStrong Parent Action Rally. Led by a drum line of students from charter schools all over the state, 500 parents celebrated, according to a press release, “50,000 public charter school children currently receiving a world-class education” and strove to “raise awareness of the more than 35,000 children that remain on charter school waiting lists. The purpose of the rally is to deliver one clear message: charter schools are public schools and are changing lives, adding value and creating opportunities for students across the state.”

(Photo: Altorice Frazier addresses the crowd. In 2015 he wrote, “financially unable to move to a town like Maplewood or attend a private school, getting into a Newark public charter school was the only option to ensure that my kids received the education they deserve.”)

This is a precarious moment for the public school choice movement in New Jersey because Gov. Phil Murphy has promised NJEA leaders that he will call for a “pause” in charter school approvals, despite the need and hunger for better options for children relegated to long-struggling schools. How precarious? One month ago the State Board of Education unanimously approved Repollet’s choice for Assistant Commissioner, Paula White. A week later, Murphy abruptly fired her at NJEA’s behest because she worked for eighteen months at a pro-choice organization called Democrats for Education Reform. Not a good sign for those who value the the needs of families, especially low-income ones of color, over the blessing of adult-centric special interest groups.

(Photo: Senate President Steve Sweeney, who has said that allowing school boards or communities to vote on charter approvals, a stance advocated for by anti-choice groups like Save Our Schools-NJ, would “absolutely shut down charter schools.“)

I had the opportunity to chat with two charter school moms, Tiffany Shepherd and Maria Pagan, whose children attend the Community Charter School of Paterson (CCPS).

Tiffany Shepherd’s nine-year-old daughter Milan has been attending CCPS since kindergarten and she wants to tell this to New Jersey legislators who buy into the anti-charter narrative: “Find me a school,” she says indignantly, “that does what CCPS does for my child and then we’ll talk.”

What exactly does CCPS do for Milan? “Well,” Ms. Shepherd responds, “they give Milan an unified community with an excellent education. Did you know,” she continues, that CCPS’s first graduating class of eighth-graders [the school is K-8] “are all going to magnets or other charters? That’s what I want for Milan — access to a great education.” She explained that she can’t pay for private school but CCPS has what Milan needs. “I want more for my child, more for the youth of Paterson.”

Maria Pagan’s discovery of Community Charter School of Paterson was an accident: she happened to be walking down the street not far from where she works and there was a sign for a new school opening that September. It looked so welcoming, she remembered, and the location was perfect. “It was my choice,” she said.  She enrolled her older son, Jacob, for kindergarten. He’s 14 now and will be a member of CCPS’s first graduating class. Already he’s selected his first choice for for high school: the Passaic Arts and Science Charter School in Clifton. “He’s so ready for high school,” Ms. Pagan said proudly.

Her second son Dylan is a third-grader at CCPS and at this point the school is her community. Ms. Pagan is involved with the PTO and is Vice President of the School Council. She sometimes hears  “a lot of nonsense” about those who look at charters as a drain on district finances or as “creaming off” top students. “I don’t see any of that,” she says. “I would recommend this school to anyone.” She muses,”I don’t care who runs a school as long as my kids get a good education.”

Her youngest, Leah, four years old, will be a CCPS kindergartner next year.

Among the speakers at the rally was Crystal Williams, a Newark mom of six children. “We are a family,” she proclaimed from the podium to the cheering crowd, and this family has come down here to Trenton, many of us taking a day off of work, to tell everyone that this important and that you must listen.

Ms. Williams told this story about her seventh-grader Jason, a special needs child at North Star Academy in Newark. Jason, she says, can be combative and moody. He gets angry easily, but he’s also funny, charming, and smart. “I can’t even begin to count the number of phone calls and meetings I’ve had about him.” One day he came home from school, she related, “all lit up like a Christmas tree!” “Tell me what happened,” she said. “Please tell Mommy!”

That day Jason had a test and he was nervous. “I couldn’t stop shaking my leg,” he said. All of a sudden one of his favorite administrators, Dean Wheeler, appeared and “he took me down to the gym. We started doing push-ups! When we stopped, my leg wasn’t shaking anymore! Then we went back to the classroom but it was almost time for my test to start and the teacher was going to close the door. So the Dean said, ‘see if you can beat me there’ and we started to run! Mommy,” Jason, confided, “I think he let me beat him.”

Another Proponent for November School Board Elections