“You Broke Our Dreams.” Latina Mom “Talks the Truth” to Lakewood’s School Board and Lawyer 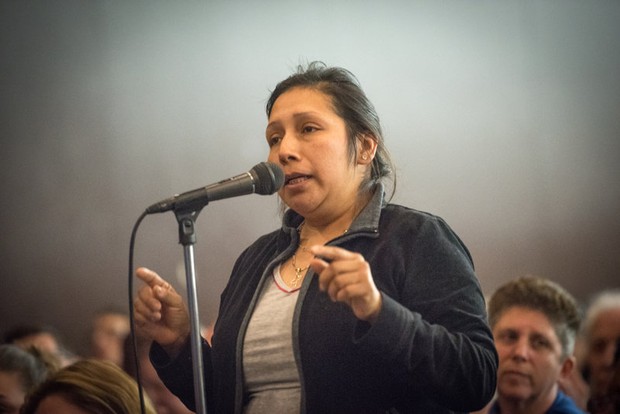 “You promised to help my community but that’s not the truth,” said Alejandra Morales of the advocacy group La Voz Latina to the Lakewood Board of Education and board attorney Michael Inzelbuch. “How do you know what’s going on in the schools? You don’t have children there. I want to talk the truth. Now you’re asking for money from the state and my children don’t have a teacher.”

It was a chaotic scene during the last third of the April 30th school board public meeting. (You can watch the whole thing right here.) I was a school board member for 12 years (a president for 9) and I’ve never seen a school board meeting that is run by the board lawyer. But this is Lakewood and they do things differently here.

Indeed, no staff member spoke — including the state monitor David Shafter and superintendent Laura Winters —  unless directly addressed by Inzelbuch. I’m pretty sure he made a motion, which only board members can do. The first hour of the meeting is Inzelbuch explaining the proposed 2018-2019 school budget (see a copy of the budget here), swearing that no teachers will be laid off, threatening a civil rights action against the state and his resignation if the district doesn’t get an additional $28 million in aid. “We’re going to ask some questions so we can get past the fake news and get to the real news,” he propounds trumpishly. “People were told not to come to this meeting for some reason because truth kills.”

(I was told confidentially that staff members were instructed by local union leaders not to attend the board meeting as a form of protest. Can’t say I blame them. According to Inzelbuch [or maybe he was letting Business Administrator Robert Finger talk then, can’t remember] the budget assumes no salary increase for teachers. This is not how functional districts build budgets.)

A quick summary of the first hour: Inzelbuch uses the word “transparency” a lot. He says Senator Robert Singer wasn’t there because “of a previous engagement.” (Does the Senator typically attend all board meetings in his legislative district? Just Lakewood’s?) When asked about overcrowding at the Middle School and whether the budget included money for trailers, State Monitor Shafter, after queried by Inzelbuch, gently informed the Board that facilities needed to be funded by either a bond referendum or a tax increase.

But at about minute 57 on the tape, we get to the heart of the meeting when a large crowd of Latino families — not sure how many  but the Asbury Park Press says they packed the high school cafeteria —  indeed “talked the truth.” Ms. Morales, their spokeswoman, said that “too much money was spent on private school students at the expense of the public school population.”  Contradicting Inzelbuch and at times breaking down in tears, she said, “The problem is not how much the state gives the district, the problem is who receives the money in the district.”

Specifically addressing problems at Lakewood Middle School, which has 1,207 students grades 6-8 who are 87 percent Latino and 9 percent Black (77 percent are economically-disadvantaged and about the same percentage speak Spanish at home), Ms. Morales detailed her child’s struggle in a math class that had no teacher for a month. “This is news to the Board,” said Inzelbuch. Mr. Goldstein, summoned to the dais, said that some teachers were out on maternity leave and “there was a certified teacher in every room.” (“Not a certified math teacher,” said someone in the crowd.)

Ms. Morales pursued the issue of whether teachers would be laid off, given the current $28 million budget deficit. Inzelbuch said “no.” “I don’t believe you,” said Morales. “Everyone here, they know. Everyone here they know what is happening in Lakewood.”

Inzelbuch recited state law that after May 15th no teacher can get a notice of Reduction in Force (RIF), or laid off.  He noted overcrowding in classrooms and linked that to the district’s failure to provide a “thorough and effective” education, as cited in the state Constitution. He reiterated that if the state doesn’t provide a thorough and effective education — in other words, if it doesn’t hand over the $28 million — he will resign as board attorney (see this email), wait the required three months and “go back to suing the district” on behalf of non-public school students. He’ll also file a civil rights claim against the state.

“I’ll probably lose my job by saying this but I don’t care. Facts speak louder than words…I agree with you. You’re right. These board members don’t look like you. But you don’t have to look like someone to help…It is ridiculous that elementary students don’t get after-school clubs, don’t get music. I lose sleep because we’re not doing enough. The bottom line is that in Lakewood we are not doing enough and you are right to be frustrated. That there’s not a teacher in the math lab for a month. Tell me what more can we do.”

Ms. Morales said, “there is no [math] teacher. I call you many times and you don’t answer the phone. You promised me before. How can I believe you? Does anyone here believe? My heart is broke. You put several thousand dollars in the school and you put more money everywhere else.”

“We have no phones, we can’t get a driver’s license,” she continued. “We pay taxes. We are human beings.  Our children are Latinos. What is wrong with you guys? We’re discriminated against with everything.  We come to this country for our children, for no more racism. We need an education for our children. You break our dreams.”

A few words about the proposed budget. (You can see it here.) The Board projects a total operating budget of $165,557,292 for school year 2018-2019, which is $20.3 million more than last year. I guess that’s where the state is supposed to come in. There’s a big tab for non-public special education students, mostly at the School for Hidden Intelligence with an annual tuition rate of $106,997.10 and whose founder was just charged with stealing $1 million from public school funds) and Special Children’s Center with an annual tuition rate of $67,743.90, both of which have an exclusive ultra-Orthodox enrollment except for one Latino child at SCHI, as well as special needs children placed in ultra-Orthodox yeshivas. Inzelbuch says the district is placing more Latino students out-of-district. Total tuition for out-of-district placements is $39,195,842.

Now let’s take the various line items that go to special education students in yeshivas (see items on the second page of the budget document that start with “non-public”): the total is $29.7 million. Add it all together and you get about $102 million.  So Lakewood Public Schools, which has math classes with no math teachers, is sending about 62 percent of its state, federal, and local revenues away from public school students like those who jammed the cafeteria last week and, in part, to schools that don’t meet the state definition of schools.

Regarding Lakewood Middle School, the topic of much complaint at the meeting by members of La Voz Latina, 21.4 percent of student met or exceeded expectations on English Language Arts state tests, compared to 54.9 percent statewide. Thirty-six percent met or exceeded expectations in math, compared to 43.5 percent statewide. Some oddities in the ratio of students to teachers and administrators: at the Middle School there are 15 students per teacher while the state average is 13 students per teacher (noting this because of the complaints of overcrowding). The ratio of students to administrators is 402 to 1 administrator, compared to 187 to 1 statewide. The district or the state left blank the ratios for librarians, social workers, child study teams, etc. Clearly something’s off.

One other note: on the district homepage is this notice:

Be it further resolved, that Confirmation in writing must be received prior to the May 7, 2018 scheduled public hearing for the budget.

This is not how union/board negotiating works. The state does not “tell” the district how much to allocate for teacher raises. After all, Lakewood isn’t under state control and, even if it were, the union and the board still negotiate contracts. It’s kind of cute — stick it the state! — much like Inzelbuch threatening to resign from his $600,000 per year gig. But this “resolution” is unhinged from reality.

When Local School Boards Get it Right: Marlboro Reduces Local