Correcting The Record on “Murphy Promise Tracker”: The Education Edition 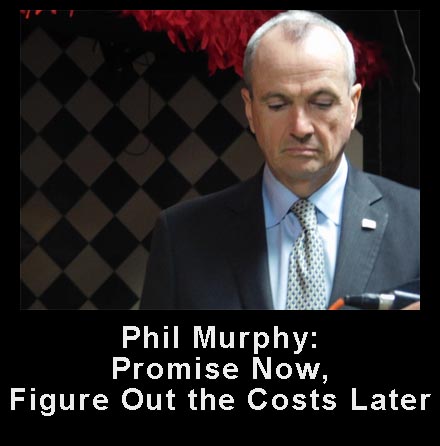 This past weekend The Record published its latest edition of its“Murphy Promise Tracker,” which aims to hold Gov. Murphy “accountable” to “statements made during the campaign or posted on its website.”

One problem: The Record is grading on a curve. In fact, every single promise made by Murphy receives a declaration of either “promise kept” or “promise launched.”

And that’s simply not true.

Let’s preface this by acknowledging that Gov. Murphy has had a rough go during his first six months, largely due to the pissing contest between himself and Senate President Steve Sweeney. In an ethical and political lapse of judgement, Murphy failed to publicly call NJEA out for its vendetta against Sweeney for not adding to last November’s ballot a referendum that would require significantly higher deposits into NJ’s broken (and broke) state pension system. Using almost $5 million of teacher union dues, NJEA backed Sweeney’s challenger, a Trump-loving, climate change-denying, immigration foe named Fran Grenier.

Now, let’s be fair: Sweeney’s ire aside, Murphy could never have kept all his campaign promises. (Find me a politician who can: Build that wall! Save the pension system without concessions from public employees!) Yet an uninformed reader might be hoodwinked by The Record’s rose-colored assessment of the Governor’s successes and failures.

Hence, here is a corrected version of the Record’s report card on Murphy’s progress, with a focus on promises that affect public education.

Murphy wanted to raise taxes on NJ residents with incomes over $1 million,  from 8.97 percent to 10.75 percent, to increase revenue for items like school aid and pension payments. Then we were hit in the rear by the GOP  tax bill, which eliminated property tax deductions over $10K. “In passing their tax scam, my Republican colleagues said out loud that they were sticking it to the Northeast, and they sure did, starting with the Garden State,” said U.S. Rep. Bill Pascrell.”That any middle class New Jersey family will see its taxes increase is a disgrace.”

And so the legislative consensus for a millionaire’s tax imploded. After a game of chicken, Murphy blinked and the state now has a multi-millionaire’s tax: 10.75 percent for those who earn over $5 million, not $1 million. And a lot less revenue, $280 million compared to the originally projected $765 million. Let’s call this promise “fractionally kept.”

Seriously? On what planet? (And, yes, this is an education issue because the most popular way to exercise school choice in NJ is to move to another district.) During the Christie Administration the earned tax credit, a state benefit intended to help poor and low-income households, was 35 percent relative to the federal credit. Murphy says he’ll raise the 35 percent to 40 percent in three years. Big whoop.

If we really want to “make home ownership affordable and accessible,” we have to increase affordable housing, right?  NJ Spotlight notes a national report that called New Jersey “the sixth least affordable state for renters in the nation and a Superior Court judge ruling in a housing case found that the state needs close to 155,000 more affordable units by 2025.”

But Murphy raided $60 million from the affordable housing fund to balance his budget, leaving $15 million available. So we’ll give Murphy a grade of “Promise Partially Kept.” But that’s just because I’m feeling generous.

But that’s not a bad thing. “Fully funding” SFRA would be just dumb. In its original 2008 form, the law freezes what we call here “Adjustment Aid” or “Hold Harmless” aid. In other words, even if a district’s enrollment drops or its property taxes increase, it still can’t get less than the year before. Which means that districts that have increases in enrollment are out of luck because we’re out of school aid. But the State Legislature was able to coalesce around a proposal that fades out Adjustment Aid (like for Jersey City, which gets $174 million more a year than it should)  and frees up a little bit of cash for desperately-underfunded districts like Chesterfield.

The Record reports that Murphy “intends to reach full funding under the School Funding Reform Act in four years.” And if you believe that I’ve got a bridge for sale.

So Cynthia Nixon/Bernie Sanders! Look: We’d all (okay, most of us/some of us/me) would love to be able to provide free community college to NJ students, especially since they receive high school diplomas that signify attendance rather than proficiency in basic academic subjects. We’d just call it K-14 rather than K-12. (I’m kind of serious, by the way. One way or another, we’ve got to get it done.)

Murphy presented a path toward free community college within three years during his budget speech. In his first fiscal year, 2019, he has allotted $50 million that would allow about 15,000 low-income students attend college next spring. But the spending must be approved by the Legislature before he signs the budget into law. It’s also unclear how Murphy arrived at the tuition cost, and other analyses suggest tuition-free college would ultimately cost much more than Murphy’s estimate of $197.5 million.

Sadly, the Record gets this one right. Murphy promised NJEA that he’d “scrap PARCC Day One” and, while he can’t do that, he seems determined to move away from a test that accurately measures student proficiency, at least as much as one test can. (For my recent commentary see here and here.)

So we’ll spend a boatload of money and a boatload of educator time to produce a test that looks a lot like PARCC but is called something else. Why? Because federal law requires that we test our kids annually grades 3-8 and once in high school with an assessment aligned with the Common Core, one just like PARCC. But wait! We don’t have the Common Core anymore! Well, we do — federal law requires course standards aligned with 21st century skills — but we call it NJ Student Learning Standards.

And those standards looks an awful lot like the Common Core. Trenton’s Next Mayor and the City’s Schools