Yes, Governor, Your Obsession with PARCC is Wasteful and Misguided. 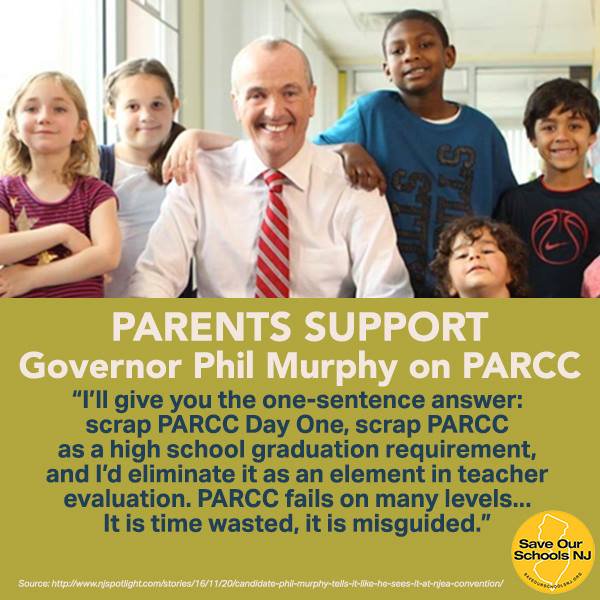 “It isn’t today,” he said in an appearance at the Golden Nugget casino. “I still don’t like it. And I’m not gonna wake up someday and become a fan of PARCC. I’m not anti-assessment. … But I’m no fan of PARCC.”

And  why are we in the midst of this expensive, time-consuming enterprise?

Because in 2016 candidate Murphy told NJEA leaders and kindred spirits that he would comply with their demand. As I recalled here, during his keynote address at NJEA’s 2016 annual convention he promised to “scrap PARCC Day One.” He didn’t, of course, because he couldn’t. At the time he was ignorant of the complexities in ditching a set of assessments that accurately gauge student proficiency and creating a whole new set, all while complying with the federal government’s mandate that every public school student in grades 3-8 and once in high school take annual tests aligned with high standards in math and English language arts.

Yet he’s not letting go, willing to spend valuable time and resources (estimates of creating new tests run into millions of dollars) to keep his word to loyal supporters.

I think Murphy’s refusal to modulate his stance, even as he learns more about standardized testing and hears from those outside the anti-testing bubble, is a sign of weakness. I don’t like it. We need a strong governor, now more than ever. And Murphy’s rigidity, even when faced with new information, contributes to a growing narrative of someone out of his depth. (See yesterday’s Politico for an example of this narrative.)

Back to PARCC. A few highlights from the DOE report, which describes the thoughtful consensus among 2,363 “interested residents” during a series of listening tours:

As long as it’s not called PARCC? Maybe that wasn’t one of the questions. Because, ya know, we can do all this with PARCC…

At any rate, I detect less rigidity from Commissioner Repollet. In his preface to the DOE report, he says, “as we move forward in this work, we need to keep the children of New Jersey as our “‘north star.’” He is reminded, he says, of Ghana’s first president, Dr. Kwame Nkrumah, who said, “forward ever, backward never.”

To me this means that N.J.’s efforts must focus unsparingly on improving children’s academic outcomes and that we will never go back to the days when we pretended that 90 percent of our kids are proficient in math and reading.

I’m just not sure that’s what Gov. Murphy means.

The state BOE and the Legislature, which must approve these changes, are not unanimous in their support for ditching PARCC. NJ Spotlight reports today that that the BOE’s acceptance “is not a given” because “several of its members, including president Arcelio Aponte, have expressed misgivings about giving up PARCC altogether.” Senator Teresa Ruiz, chair of the Senate Education Committee, said, “We should not move forward without ensuring that the state’s use of assessments are developed around the most important aspect of education — the success of our students.”

Other groups weighed in too. Their statements are below.

The open-mindedness of BOE members and our most educationally-adept legislator is more promising — stronger, if you will — than basing education policy on a campaign promise to teacher union leaders. In fact, this whole hullabaloo around state tests can be boiled down to a decision between what’s best for kids and what’s best for adults.

I vote for the former.

One other note: The Star-Ledger reported yesterday that hours before the DOE background documents were released (report, press release, powerpoint) Save Our Schools-NJ, which apparently has a private line to the Governor’s office, posted on its Facebook page “part of the full description for a proposed revision to state regulations on standards and assessments.”

The rest of us only had access to one-line descriptions of action items.

Reporters called the DOE for comment. Then SOS-NJ deleted the post, but not before someone took a screenshot.

Look, news leaks. But to just one group that runs a relentless campaign against standards, accountability, and school choice? It’s kind of scary (and weak) if Murphy’s source of information on public education is an adult-centric special interest group.

And now some comments from those who value accurate measurement of student proficiency so we can improve the state education system and serve our kids best.

“Assessments provide an objective measure on how a successful a community at large is in educating its students. Eliminating tests is a disservice to vulnerable student populations and communities. We need a tool to determine if we are meeting the needs of minority and economically disadvantaged children as compared to students in affluent communities,” stated Shelley Skinner, Executive Director of Better Education for Kids. “The voices of the affluent suburban communities like SOS that are vocal critics of PARCC cannot replace a data-driven discussion.”

“With approximately only half of New Jersey students performing at proficient levels on PARCC and NAEP, now is not the time to be watering down our State’s assessment,” added Patricia Morgan, Executive Director of JerseyCAN. “Statistics indicate that nearly 60% of New Jersey students are unprepared for college. Assessments help us determine what steps we as a State need to take to help them be successful. The elimination of tests in certain grades will result in lost data that could prove helpful in designing an educational system that fits the needs of every student regardless of their zip code.”

WE RAISE NEW JERSEY Statement of Proposed Testing Changes:
“We appreciate the statewide assessment outreach conducted by Commissioner Lamont Repollet and the Department of Education over the past several months. We recognize that this system is in need of improvement, and we were happy to host a focus group on this very topic. We were encouraged to see several of the key takeaways—like providing results in a more timely manner—included in the recommendations.  However, we have concerns about how wewill ensure all students will graduate ready for success after high school, and that ‘additional pathways’ to graduate maintain a high level of rigor.  It’s important that parents continue to have as much meaningful and relevant information as possible when it comes to their children’s academic progress,” said Rose Acerra, President of New Jersey PTA.

“Ninth grade is widely known as an important transition year for students and an indicator for later academic success,” added Patricia Morgan, Executive Director of JerseyCAN. “Getting rid of the ninth-grade English language arts exam is taking away one important tool for parents to assess where their children are and where they need to go.  In addition, studies have shown that Algebra II is one of the leading predictors of later success in college and the workforce.  As a state, we should be continuing to raise the bar for our students.  These proposed changes say to our kids that tenth-grade reading and Algebra I are our highest expectations for them as we send them off to college and/or career.  We’re concerned with the message this sends.”

Andrew Musick, Vice President of Government Affairs of the New Jersey Business and Industry Association added, “We are concerned about the impact of these changes, as NJBIA has supported strong educational standards and rigorous assessment programs in order to ensure that our future workforce is prepared for the jobs of tomorrow.”

“Eliminating four high school exams is eliminating four opportunities to compare how kids are doing across our schools. These tests are one objective way for us to ensure we are providing students from all backgrounds with equitable access to resources and opportunities to compete in college and beyond,” added Michael Taylor, Board Member of the African American Chamber of Commerce of New Jersey.

Another Call for November Elections

Study of the Day: TFA Teachers Most Effective in Math