New Jersey Has One of the Lowest Rates of Inclusion of Special Education Students in America. A New Report Explains What We’re Doing Wrong. 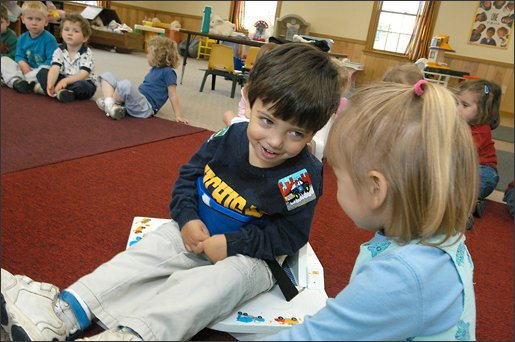 A new report called “An Advocate’s Guide to Transforming Special Education” by the nonprofit group Innovate Public Schools (IPS) doesn’t mince words: students with disabilities are segregated into classrooms with low expectations, “regardless of how moderate their disability may be.” Families and advocates are often “dismissed and ignored.”Special needs children, especially those of color, are systematically relegated to lower tracks, regardless of cognitive potential, all in violation of the basic tenet of federal law that children classified as eligible for special education be placed in the “least restrictive environment.”

Does this sound familiar to you? It does to me. As the mom of a son with multiple disabilities, I have witnessed self-contained classrooms that seem more like sheltered workshops than places of learning. I have fought with staff intent on defining my son by his deficits, not his strengths. Example: His first preschool teacher in an out-of-district placement pronounced with certitude that he would never speak and labeled his ability to recognize letters and their corresponding sounds  “hyperlexia.” I remember pleading with her, “does everything he do have to be a pathology? Why can’t he just be good at something?”

Nope. Not a chance.

Fight. According to IPS, which describes its mission as “working to make sure that all students — especially those who have been left behind for too long, including low-income students, students of color and students with disabilities — receive a world-class public education,”

The report highlights several districts in California — both traditional and charter (KIPP Raíces in Los Angeles) that have successfully implemented tiered systems of intervention — escalating levels of support — that allow students to “exit out” of segregated settings with relative ease. The system uses a series of steps that include changing teachers’ expectations, emphasizing accountability, providing all necessary supports, addressing implicit bias, including students far more frequently in classrooms with typically-developing students, and using special education modifications that benefit everyone — students with and without disabilities — through an approach called “Universal Design for Learning.”

Let’s start with this: the vast majority of children classified as special ed have mild to moderate disabilities. While 6.4 percent have intellectual disabilities and 8.8 percent have autism (an umbrella term that encompasses a wide gamut from children with easily managed disabilities to those who need one-on-one attention), most classified students have specific learning disabilities like dyslexia or processing disorders. They’re smart. They’re capable. And they’re often relegated to isolated settings that undermine their academic and social potential.

The IPS report places the responsibility for underperformance of special needs students on several factors, especially low expectations by teachers and other staff members: “Once a student is identified as having a disability,” the researchers write, “educators often have a fixed perception about what that student needs. Some believe that a diagnosis of a disability inherently means the student will always struggle in the same way. These perceptions can end up trapping students in certain interventions or settings for far too long.” Other factors include lack of accountability, a lack of respect for neurodiversity,  racial bias (“a White student and a Black student struggling in the same ways are often treated very differently”),  and, most importantly, a “fixed mindset” versus a “growth mindset.”

Inclusion is not always the answer, particularly for students with severe disabilities. But all too often that “fixed mindset” traps capable students in segregated classrooms for no other reason than they had been placed there years ago by a Child Study Team.

In New Jersey, our woeful lack of inclusion is abetted by our patchwork school infrastructure with 591 school districts, some with less than 100 students. Hence, many students are sent to isolated placements (private special education schools mostly, sometimes other districts or county special services settings) because the small size of districts frustrates efforts to assemble a group of children with similar needs.

Researchers typically measure a child’s level of inclusion by the percentage of time spent with typical peers. Ideally, a child with disabilities will spend 80 percent of his or her time with non-disabled children, while those with more severe disabilities will spend 40 percent of their time with typical students. From the report: “ In 2014, only 62% of students with disabilities nationwide were educated in general education classrooms for more than 80% of the day.”

How about NJ? According to this report from the state, only 44.9 percent of children with disabilities spend 80 percent of their schooldays with typical peers. The national average is 62 percent. (Want to get global? In Italy it’s 99.5 percent.) The NJ DOE notes, “Thirty years of research has shown that inclusive education is more effective and shows better results for students academically, socially and emotionally.” And, “Students with ANY disability show greater achievement and academic progress in inclusive settings.

But let’s not blame the system. Let’s blame the parents as well. My husband and I will get in front of the line.

Here’s the deal: once you find a placement that works, it’s really scary to move. When we (quickly) determined that our son’s original preschool placement (yes, the one where my now chatty boy was designated forever non-verbal) our district, which at the time had no suitable in-district programs, worked with us to place him in the Rock Brook School, one of N.J.’s plethora of private special education placements.  He thrived there (and started talking his first year). Seven years later when his case manager started suggesting that he return to district, we  stalled.

Why? Perhaps, the same reasons that stymie the children described in the IPS report: our own unnecessarily low expectations for our son’s ability to adjust to a typical middle school, our own fixed mindset, our own fear of change.

And so if  I have one quibble with the IPS report, it’s this: the responsibility for the unacceptably low level of inclusion for students with disability lies not just with the “system” but with the parents as well. Just as teachers, child study team members, and administrators need to be educated about the nascent abilities of students (especially those with mild to moderate disabilities) to outstrip academic expectations, so do parents, especially in a state with a disproportionate number of restrictive placements.

Our son transferred back to district. He exceeded our expectations, despite his moderate to severe disabilities. His social and academic skills improved. He wasn’t bullied. He had great teachers and not-so-great teachers, but welcome to the world, right?

Because our son was in the world, not bussed off to another county. He was accepted (even embraced in some cases) by his typical peers, he managed the logistics of maneuvering within large buildings just fine, and he started seeing himself as a member of our community. We believe — we know — that he needed his initial years in a segregated school. However, over time he was able to manage a lower tier of supports within a more inclusive setting. That’s what the researchers at IPS advocate for. They’re right.

Is Refusing Tests Just Like Fighting for Abolition and Marriage “I Love Newark And Am Proud To Say I Live