Confessions of a Jersey-Born White Teacher in an Urban School 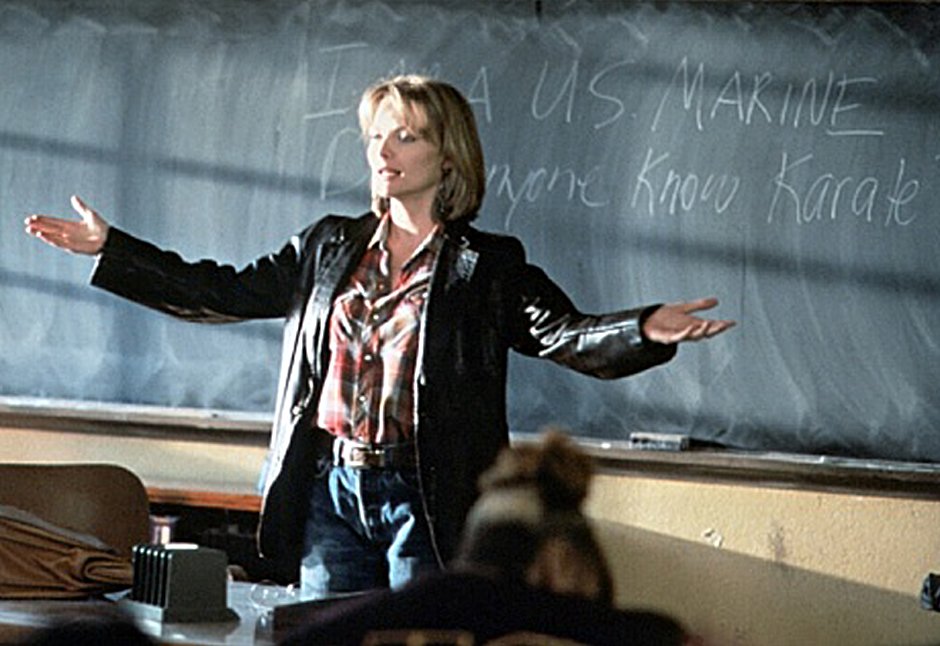 (This is a guest post by Jennifer Rich, an assistant professor in the College of Education at Rowan University, and the director of research and education for the Rowan Center for Holocaust and Genocide Studies. It first appeared in the Hechinger Report.)

My first year of teaching, I did almost everything wrong.

In the 1995 movie, Pfeiffer plays urban high school teacher LouAnne Johnson, who breezes into class and finds what makes her urban students tick by teaching them karate.

In real life, Johnson was an ex-Marine. But I was a cupcake out of cosseted Cherry Hill, New Jersey, driving a powder-blue Jeep into 1990s-era Bushwick, Brooklyn. I hadn’t a clue.

Nothing in my life prepared me. Cherry Hill, my hometown, is mentioned in Jonathan Kozol’s Savage Inequalities as the rich set of neighborhoods juxtaposed with Camden. It is the town that doesn’t allow the impoverished students just down the road to receive an equitable education.

Growing up, I had never set foot in Camden.

Now, here I was, a white teacher parking a candy-colored car in one of the most crime-ridden areas of Brooklyn. Not one of my students was white. Every student lived in poverty. Their parents were, mostly, in prison. If they weren’t in prison, they were otherwise absent. My students lived with grandparents or older siblings, and the older siblings were often in gangs.

I had gone to a New York City job fair, interviewed with one principal and was handed the job. No demo lesson, no series of interviews. I handed over my resume, assured her that I was happy to work with students who didn’t know how to read, and wasn’t afraid of a “tough” neighborhood. I was in.

I told my father that I could teach anywhere. I believe a direct quote was, “All I need are students and some space.” This was a mistake, too. I was wildly unaware of my environment, the needs of my students and their home lives.

There were bars on the windows of my classroom, but the windows barely opened anyway. I spent hundreds of dollars on bulletin board supplies, and hours making my room “beautiful.” My students seemed not to notice.

On the first day of school, the first words came from Jose: “Why you here? You white.”

The next, from Melissa: “I’m here again because I’m stupid.”

This next mistake was not mine, but a flaw deeply ingrained in the system. As a new teacher in the school, I had the lowest “track” of students, so my second-graders were 11 years old. They had repeated kindergarten and first grade, and they were on their second year of second grade with me. They didn’t know their letters, numbers or colors. But they were still expected to keep up with the city’s standardized, mandatory curriculum. At 9:00 a.m., for example, we needed to be on page 28 of the second-grade reading anthology, whether they could read it or not.

Things deteriorated for my class. We played a game of “loud, louder, loudest.” They always won. I constantly lost my voice. (I should never have played.)

Another mistake I made was not giving my students what they needed, but what I thought they needed. I spent hours outside of school making “file folder games.” These were learning games glued into file folders for all subjects. It was personalized learning! They were cute! And fun! First, my file folder games started disappearing. Ever the optimist, I took this as a good sign — maybe my students wanted to play them at home? This was not, in fact, the case. To show me how wrong I was, my students started destroying them in class.

In what is my biggest embarrassment, I would reprimand my young students by telling them to “look at me” when I was correcting them. They would always look down, and I couldn’t understand why. It took until May for a more seasoned teacher to take pity on me and explain that it was a sign of respect. I was horrified at my complete lack of cultural knowledge, and what felt like an untenable error on my part.

So, what finally worked? Harry Potter, “the boy who lived.” At some point, toward the middle of the year, I found a big recliner left out as trash in my neighborhood. It was blue and soft and clearly well-loved. I dragged that chair into my Jeep, to school, and up to my classroom.

I made a deal with my class: If we got through the mornings smoothly, I would break the rules for 15 minutes every day after lunch. I would shut the door and read Harry Potter and the Sorcerer’s Stone. It wasn’t part of the standard curriculum, so it would have to be our secret, but I promised they would love it. And they did.

I brought them into the national conversation — with magic, and hope, and a little bit of faith that they would love Harry as much as I did.

As we connected over literature, I was able to loosen up a bit. I kept giant tubs of pretzels on my desk so they could eat when they were hungry. “Hangry” wasn’t a term yet, but they were hangry all the time. I played music while they worked. I found it was soothing to have some noise going — they didn’t have to make it themselves.

I learned about their cultures and stopped asking them to break their cultural norms to match my own. I learned my way wasn’t the only way.

In 2011, 84 percent of public school teachers were white. As a white teacher who has made a lot of mistakes, who didn’t know where to go for help, who didn’t even know what I didn’t know, I can say that there’s a whole wide world of places to turn now.

My first year of teaching was in 1999-2000. This was 17 years before Christopher Emdin wrote For White Folks Who Teach in the Hood, and before professional learning communities were possible on Twitter. I wish I had had these resources available to me, as they certainly would have helped me become more responsive.

The secret to being a good teacher is, I think, to be just a little bit subversive. Never forget that you are teaching children, not a curriculum. It’s okay to break some of the rules some of the time to meet the needs of the children in your care.

Mostly, I learned that we can constantly learn from the mistakes we make in the classroom. That even on the days we go home tired and overwhelmed, we are able to do better tomorrow. We are able to read, say sorry, take a new approach, be humble. We can and should learn from our students, from their languages, cultures, social worlds and interests.

By the end of my first year of teaching, I no longer wanted to be Michelle Pfeiffer (although I still wanted her leather jacket). Nor did I teach only the mandatory curriculum. I stopped demanding that my students look at me when I corrected them, and I abandoned file folder games altogether. Instead, I became a little bit more responsive and I tried to stop raising my voice. I listened to my students, and I read them books that they loved. I was not an excellent teacher, but I was one who they wanted to learn from.

That was half the battle

Camden Update: “Our Students Have the Potential to Change the