Gov. Murphy Promised NJEA He’d “Get Rid of PARCC Day One.” Not So Fast, Say Those Who Value Honest Representations of Student Proficiency and School Quality. 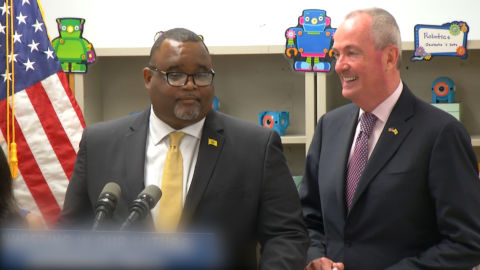 Last week New Jersey Education Commissioner Lamont Repollet presented a  proposal to the State Board of Education to reduce the end-of-course (EOC) state tests administered in high school from six to two, the minimum required under federal law. To the shock of those who follows these typically pro forma sessions, the BOE tabled the proposals because it didn’t have the votes to pass them and generously spared Repollet and his boss, Gov. Phil Murphy, the embarrassment of failing to fulfill a campaign promise, that infamous commitment at the 2016 NJEA Convention that, if elected, our new leader would “get rid of PARCC Day One.“

Several days later, this past Monday afternoon, the New Jersey Senate and Assembly education committees, chaired by Senator Teresa Ruiz (D-Essex) and Assemblywoman Pamela Lampitt (D-Burlington, Camden), held a joint meeting to gain insight into Commissioner Lamont Repollet’s proposals. Sen. Ruiz, who designed the 2012  teacher evaluation and tenure reform legislation called TEACHNJ and, in a show of wizardry, managed to herd legislators, NJEA officials, and lobbyists into consensus, had this to say to the Commissioner:

If we move entirely away from (assessments) in the high school years, what kind of data will we be getting to our families, and to our teachers and to our principals, to make sure there is a remediation plan that protects that child?

Is Repollet right? Is there any need for state standardized tests beyond the minimum required under federal law? Do course grades provide parents with adequate information about school quality and student academic progress?

If only it were that easy.

A new report published yesterday effaces Repollet’s glib reply to Ruiz.  The research, published by the Fordham Foundation, is called “Grade Inflation in High Schools (2005-2016),” authored by Seth Gershenson, a professor of public policy at the School of Public Affairs at American University. It’s worth reading in its entirety but I’m focused on the elements pertinent to Monday’s hearing: the phenomenon of grade inflation, far more prevalent in wealthier high schools rather than poorer ones, and the discrepancy between three different gauges of student mastery: classroom grades/report cards (what Repollet wants us parents to use to gauge academic growth and school quality), EOC tests (like PARCC or another test aligned with NJ course content), and ACT scores (that reliably predict college readiness).

Sounds complicated but it’s really not. Gershenson studied student-level data — transcripts, EOC exams, and ACT results — for all North Carolina public school students taking Algebra 1 from 2005-2016. Here are three data points for those concerned with accurate depictions of student proficiency, which presumably concern both the State Board of Education and the NJ Legislature, not to mention parents, students, and teachers.

In fact, 36 percent of students who received “B’s” in Algebra 1 failed to reach proficiency cut-offs on EOC tests. Gershenson writes,

While some of these students might have simply had a bad testing day, that can’t explain why so many B students are failing the corresponding EOC. Even fewer B students are meeting the “solid” level on the EOC, which indicates college and career readiness: more than half (57 percent) receiving Bs fail to demonstrate college and career readiness on the EOC. Considering that a B is generally considered to be a good grade, these findings do indeed suggest inflated grades.

Translation: Repollet’s answer to Ruiz — parents and students can use  “regular tests, grades, and performance reports to gauge students’ progress” — is false.

[G]rade inflation may have the political consequence of encouraging families to believe everything is going well at school, even when a school is troubled and needs reform. It is easy for parents to ignore systemic mediocrity when their children’s grades seem strong. In this way, grade inflation may contribute to a more general sense of complacency about schools and help explain why parents tend to report satisfaction with their own schools at the same time that they hold deep concerns about the state of the country’s education system.accompanied by stagnant SAT, ACT, and NAEP scores, strongly suggesting lowered classroom standards.

Translation: reliance on subjective report card and grades promotes what some call the “honesty gap,” or exaggerating student proficiency to make everyone feel good instead of providing parents with truthful information, which in turn interferes with commitments to meaningful systemic improvements.

During that Legislative hearing Senator Ruiz asked Commissioner Repollet, if we get rid of EOC tests (i.e., PARCC), are report cards or teacher-designed tests enough to communicate to our families about their children’s academic progress? The answer, via North Carolina, is a firm “no.” The elimination of EOC standardized tests not not only renders student growth less transparent but exacerbates socio-economic inequities, and, finally, “may breed an unwarranted sense of complacency” among students that may prevent them “from reaching their full potential.” Gershenson writes,

Likewise, parents will not recognize the need to help their child catch up. In this case, the complacency is not due to lack of desire or ability, but rather faulty information about the student’s academic standing.

During the hearing, Repollet tried to explained to the “edgy” legislators that his goal as Commissioner was to “create an educational system” built on “Governor Murphy’s vision.” Ruiz replied,

When you’re given a charge to go out and eliminate something, you’re not looking at the benefit of it, you’re not looking to really overhaul, but just to carry out that vision,” she said. “That question is not to you, but to the governor as to why he wanted the department to go lead that charge.

Ruiz’s question must be answered: what exactly is the Governor’s vision, beyond his promise to NJEA to eliminate PARCC? If the DOE is truly interested in providing parents with accurate, transparent data about student growth, why is it determined to eliminate more reliable sources of information? We know this move towards opacity will warm the hearts of NJEA leaders (who, by the way, have their own butts on the line as they strive to regain credibility after their embarrassingly vengeful campaign to unseat Senate President Sweeney and replace him with a Trump acolyte) but what will it do for students and families, especially those trapped in low-performing districts?

If the best Repollet can do is “we’ll use inflated report card grades,” then I don’t see how he retains his own credibility. He becomes just another political lackey, not exactly what you want in your Education Commissioner.

It’s not too late. He and his deputies can go back to their offices and create a new plan that preserves reliable measurements of student progress without over-burdening anyone. (See here for my suggestions.)

While they’re at it, maybe they can come up with a vision statement that privileges New Jersey’s students and families over lobbying groups.

(One further note: did anyone at the DOE or in the Governor’s Office consider the repercussions of decimating Ruiz’s TEACHNJ legislation, the plan endorsed [at the time] by NJEA that linked teacher evals to student outcomes? Just last month the DOE announced that the link would be reduced from 30 percent to 5 percent, rendering the link meaningless and tossing Ruiz’s multi-year labor out the window. [Here’s NJEA’s thank-you-note.] Now Murphy says, “we’ll get rid of almost all the objective measurements of student outcomes too.” Timing, people, timing. What did you expect?)

It’s a poorly-kept secret in NJ