Hannukah Gelt or Coal in Your Stocking? Checking in on Lakewood. 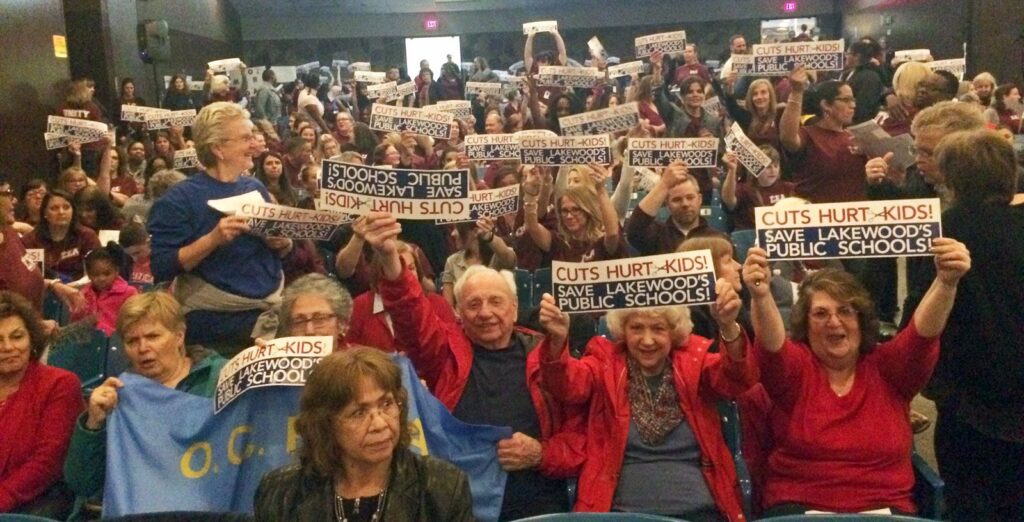 Stacey Barchenger of the Asbury Park Press is indefatigable in her investigations into the shenanigans in Lakewood Public Schools. Example: last week she reported that the district, which operates as a funding stream for 130+ private religious ultra-Orthodox Jewish day schools, used $1.6 million in federal money intended for secular material to buy religious textbooks.

This is a violation of New Jersey state law and federal law.

From the APP story:

The Press reviewed more than 370 pages of records documenting every textbook purchased through the grant program for private schools in Lakewood in the 2017-2018 school year.

The Press found more than 4,500 books and workbooks that teach Hebrew or Yiddish reading or writing — but no other foreign languages — and a small number, like “Fundamentals of Life Science,” with clear religious themes, according to listings on Amazon.com, the book covers and publishers’ websites. Dozens of copies of a history textbook that teaches “through the lens of God’s redemptive plan” have also been purchased in the last five years, the Press found.

The funds used by Lakewood Public Schools for openly religious material are purchased with 192/193 funds. Chapter 192 funds are earmarked for compensatory education, English as a Second Language, and home instruction for non-public school students, i.e., students in private or parochial schools. Chapter 193 funds are earmarked for evaluations for eligibility for special education, supplementary instruction, and speech-language services for non-public school students. In total, during the 2017-2018 school year Lakewood received $22 million in 192/193 funds.

Federal and state law specifically disallows the use of these funds for the purchase of religious materials.

So what else is new? Lakewood is breaking the law by, per the APP headline, using “Your Tax Dollars [to] Bring God into Lakewood Schools.”

Of course, it’s not just 192/193 funds. Sometimes when I’m in a masochistic mood I read Lakewood school board agendas. Take this one from this past July (please!): if you scroll to page 13, you’ll see a partial list of the 193 students — all ultra-Orthodox (although there’s a rumor that one student is Latino) that Lakewood sends to the School for Children with Hidden Intelligence (SCHI), whose founder was charged with theft of $1 million of public school funds. According to the agenda, Lakewood Public Schools pays $509.51 per day for each student. That’s $91,712 dollars for the regular school year, plus Lakewood also pays for these children to attend summer camp. About half (approximately) of the children at SCHI also have a personal aide at $152.38 day, or $27,428 for the regular school year. That comes to $119,140 for students with aides.

This doesn’t include transportation to and from SCHI. Typically Lakewood has agreements parents to transport their own children. This agenda from earlier this month lists some of the “parent agreements,” which range from $14,493.60 per year to $18,800.00 per year. With the exception of one student, every other parent transportation agreement is to the Jewish-only SCHI,  the Jewish-only Special Children’s Center, and two yeshivas (Tehilas Chaya and Bais Faiga).

The amount spent per pupil on the mostly Latino and low-income students who actually attend Lakewood Public Schools last year was $14,791. According to the state’s Summary Report, Lakewood High School students didn’t meet a single metric for the category of “Are Students on Track for Success?”

That’s not  including transportation

Meanwhile, the children who depend on the public schools for secular education get coal in their Christmas stocking.

A few other Lakewood goodies:

*At the September 17th meeting, the Board renewed Attorney Michael Inzelbuch’s contract. (See page 10 of this link.) He gets paid a retainer of $50,000 per month, which is illegal because state regulations require that legal services must be paid only after those services are rendered.  Perhaps due to legal challenges (in addition to the $50K per month Inzelbuch gets a host of other financial benefits like $350/hour for litigation and free health insurance and jobs for his friends), the Board issued an RFP, or “Request for Proposals,” to seven legal firms and received four proposals in return. One firm said it charges $24,500 per month. Another, the Weiner Law Group, didn’t list a monthly fee (um, because districts aren’t supposed to charge monthly fees), and the fourth firm, Florio, listed a monthly fee of $10,000.

To nobody’s shock, the Board chose Inzelbuch because he scored highly in “Technical and Management Criteria.” The agenda doesn’t define those terms.

*According to Superintendent Laura Winters, 365 staff members have resigned since 2014.

*Board member Chanina Nakdimen has to abstain a lot because he’s employed by SCHI. New Study: Almost 40% of Parents Have Disenrolled Their Children