New Jersey Teachers’ Pension System Is Broken, Unless You Work In the Front Office. Also, Why Are Sex Offenders Receiving Pensions? 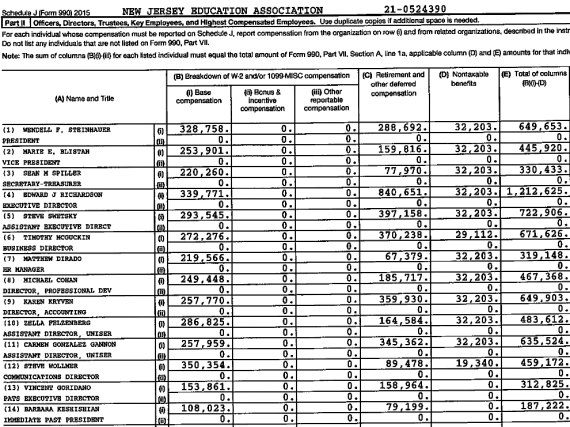 Last week I wrote about the disparities in pay between rank and file educators and those who work in the offices of NJEA, N.J.’s largest teachers union. There are two parts to today’s post: First, the disparities in annual compensation between teachers and NJEA front office employees extend to disparities in retirement security.  Second, there’s a long list of teachers and administrators who, by just about any standard, shouldn’t collect pensions at all and contribute to the insolvency of the New Jersey’s Teacher Pension and Annuity Fund (TPAF); including all pension programs and retiree health benefits, the state has an unfunded liability of about $202 billion.

First let’s look at the inequity between teachers’ reliance on an under-water pension system that is inherently political (governors develop annual state budgets that include pension payments, often bedizened with accounting tricks) and the apolitical retirement security of NJEA leaders who don’t work in schools.

According to the Manhattan Institute, without major reforms NJ educators face a “catastrophic failure” of their pension system that will run out of money sometime between 2027 and 2036. It’s worth noting that back in 2005 Gov. Phil Murphy chaired a “Benefits Review Task Force” and its final report says,”some sacrifices on the part of all stakeholders is reasonable as a way to shore up the finances.” Ralph Caprio of Rutgers writes, “there is no way, without some kind of modification to the pension system, that this state going to be in a position to fund future liabilities. It’s that simple. The numbers are clear.”

Example: In 2016 NJEA Executive Director Edward Richardson had a base salary of about $340,000. But, according to the 2016 990 IRS form (Schedule J, Part 2), under the column “retirement and other deferred compensation,” Richardson has another $840,641 for a total package of $1,121,625. Bury says that column includes income from defined contribution plans (like 401(K) plans) that teachers don’t have access to.

Now let’s look at teachers and school employees who are fired for offenses like money laundering, extortion, bribery, perjury, official misconduct, and tampering with public records. They’re not supposed to be able to collect pensions. Last year the NJ Legislature passed Senate Bill 3766 that adds certain sexual offenses to that list.  However, a review of state pension data shows that the current standards for removing pensioners have been weakly implemented, draining the pension fund further and harming the deferred compensation of innocent teachers.