Should Gov. Murphy Take Advice From Newark Teacher Union Prez John Abeigon on Charter Schools? Depends On How You Feel About Blackface. 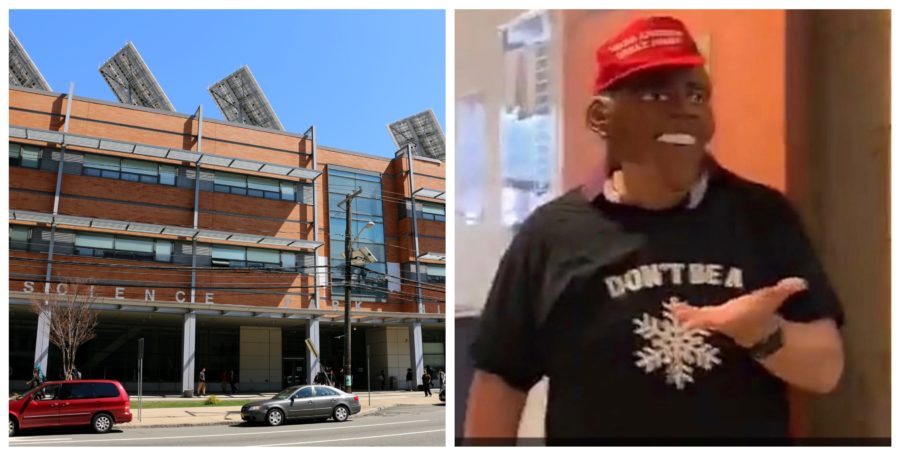 “We have no problem with getting more money into the pockets of our members.

Wherever there’s a child in this city, one of my members is within three feet of that kid. You think I want any harm to come to that child? No, because the collateral damage will hit the teacher.”

Not that there’s anything wrong with that. Look, I come from a big union family. My mom and dad of blessed memory were proud UFT members (the New York City branch of the American Federation of Teachers). My sisters and I grew up worshiping Albert Shanker, president of the AFT from 1964-1985. I still know every word to Woody Guthrie’s “There Once Was A Union Maid.”

But there’s a line, right? Even union aficionados like my parents might find Abeigon’s rhetoric a bit overblown, his actions a bit dodgy, his dismissal of the needs of Newark schoolchildren and the choices of their parents a bit cavalier and at odds with NTU’s claim of progressivism.

Whatever. He’s entitled to opinions (even though during the 2016 union elections he received just 452 votes out of 4,000 eligible members). But is he in the position of giving Governor Phil Murphy edicts on the role of charter schools in Newark  that now serve about 35 percent of students? I vote “no.” Nonetheless, on April lst he did just that, citing this error-ridden North Jersey series, claiming the charter school system is “totally out of control,” and suggesting scrapping public school choice entirely. (See his letter to Murphy at the bottom of this post.)

As he’s told us himself in an interview with Chalkbeat (from which the opening quote was taken) he sees his role as defending grown-ups, not kids.  As I said, that’s fine. But as a public service — to Gov. Murphy and anyone else vulnerable to Abeigon’s counsel — let’s dig a little deeper into the union president’s philosophy and where his loyalties lie.

Let’s start with this: the guy suffers from no false modesty. In the same interview he preaches that when superintendents are “right, it’s because they listened to us, and when they’re wrong, it’s because they didn’t.” He’s transparent about his view that economically-disadvantaged children can’t be held to the same standards as children from wealthier families, explaining that teachers “don’t expect the same results in the same amount of time.”  When the interviewer asks him about Newark Superintendent Roger Leon’s intention to collaborate with the charter sector, Abeigon replies, “[t]here’s nothing we can share. I disagree with him on that.” And how does he feel about Newark’s charter sector more generally? “Anyone associated with education reform or the corporate-charter school agenda,” scolds Abeigon, “needs to be identified, isolated, and let go. I would push Roger that anyone in the administrative sector who was hired by Cami [Anderson] or [Chris] Cerf be terminated immediately.”

Okay, got it: He’ll counsel Newark’s new superintendent to fire administrators who understand that Newark’s charter school sector is a prized and permanent portion of Newark’s public education landscape. He’s advising Murphy in the letter to take “millions of tax payer [sic] dollars” from the charter sector and give more money “to the traditional public schools who so desperately need them.”

But what does he have to say about the white teacher at Newark’s prestigious (and traditional) Science Park High School who this past Halloween wore a mask of Barack Obama – which some parents and students regarded as blackface — accessorized with a MAGA hat and a black T-shirt with the words “Don’t Be A” with a picture of a snowflake? Should he be “isolated and let go” like those “associated with education reform”?

Not at all. Apparently Abeigon believes that unfettered racism is a perfect fit  for a district that almost exclusively serves students of color. Said Abeigon about the teacher (who faced no disciplinary action), “He’s already apologized if he’s offended anyone — but he shouldn’t need to apologize. It’s the United States of America and we should value opinions whether we agree with them or not.”

Said one Science Park eleventh-grader, “I just thought, ‘Why is no one punishing him for this?’”

And I have my own questions, actually too many for one blogpost. So I’ll restrain myself to two items: Abeigon and NTU’s practice of protecting bad teachers by funding  lawyers who (mostly) get them off on technicalities (seems like NJ’s tenure reform isn’t working so well) and Abeigon’s extra-curricular activities.

Here are three teachers (click the teacher’s name for the court documents) who were brought up on tenure charges while Abeigon has ruled the NTU roost:

Lydia Wilson, a teacher at Quitman Street Community School was accused of failing to supervise six of her six and seven-year old students, allowing them to play “sex games” involving genital, hand, and oral contact during lunch and under classroom tables in her presence. In 2017 the district suspended her, launched an internal investigation, and then tried to fire her. This is from the internal investigation (quoted in the court document):

Based on the findings, Ms. Wilson was in the classroom while male and female students engaged in inappropriate physical activity, which included looking at and touching one another’s genitalia. Although Ms. Wilson claims that she knew nothing about the incidents that took place in her classroom during instruction, students attested not only to her presence in the classroom, but that on some occasions she addressed students’ behavior and warned students about actions that were linked to nasty team and nasty game. As such, I recommend the District pursue tenure charges for termination against Ms. Lydia Wilson for neglect of duty that allowed students to engage in sexually explicit behavior.

NTU lawyers represented Wilson during arbitration and argued that the investigation had been procedurally improper. The arbitrator agreed and ordered Wilson back to the classroom with full back pay and the suspension expunged from her record.

Iman Jones, a first-grade teacher at Hawthorne Avenue School, was accused in 2017 of poor judgement as well as wanton and careless disregard for her students’ welfare after a student took a razorblade from her desk and slashed another student, who required sutures and stitches. At the time of the slashing, Jones was chatting on her cell phone in the doorway of her classroom. The NJ Department of Children and Families conducted an investigation and concluded that Jones’ behavior rose to the level of neglect. The district tried to fire her so Jones, with the backing of NTU lawyers, went to arbitration. The arbitrator ruled in her favor; while the district “had established the truth of its conduct unbecoming charge,” it failed “to establish such by a preponderance of the evidence.” Charges were dismissed and she went back to her position with full back pay, seniority, and benefits.

Lynderia Mansfield, a second-grade teacher,was accused of engaging in unbecoming conduct that included screaming at students, denying students bathroom breaks without rationale, and forcibly grabbing students by their clothing in an inappropriate manner. In 2013 the district tried to fire her for “inefficiency, absenteeism, and misconduct” but lost the case. The district tried again with these new charges. Again with the backing of NTU lawyers the case went to arbitration. This time the arbitrator upheld the charges, saying that “this Teacher violated basic rules of what any enlightened culture should consider as civilized behavior toward children.”

So progressive union leader John Abeigon spends his time overseeing defenses for white teachers to wear black face and neglectful teachers to stay in the classroom with vulnerable students.. (He’s well-compensated for his trouble: According to NTU’s most recent 990 form, Abeigon’s NTU salary is $197,214.).

He also spends a least some of his time at a little club called Club Espana.

Club Espana is a “social club” in the Ironbound section of Newark. In 2008 when Abeigon served as the club’s president, its liquor license was threatened because bartenders were serving alcohol to underage kids and neighbors were complaining about noise. Abeigon isn’t president anymore. The most recent IRS 990 form lists Juan Alvarez as President and Carlos Rodriguez as Vice President. Why do we care? Alvarez, as seen on this NTU contract, is on the NTU Executive Board. Rodriguez, as seen on this pamphlet, is the NTU Vice President. Someone described Club Espana to me as an “NTU-run drinking establishment.”

Wost place I have ever went to, the place looks like a craphole. The people  were rude, the only person that was nice to me and my wife was the bartender.i dont remember the bartenders name I just know he is named after a sangria, but i thought I would give the place another shot but when we came back the people were yelling  and screaming, and it was very annoying, but there was a bald gentleman who looked like he was in charge threatening to kill the bartender, and trying to go after him. The only reason he was going after him was there was no music on, then when the gentleman left, I never have felt uncomfortable at a club in my life, I pray to God that the bartender will be alright.  I didn’t come here to witness a drunken man act like a child if I were you I would never step foot in this club. I would also thank the lady who called the cops, and I hope the poor bartender is okay. Wost place to go.

Anyway, kind of sketchy. And, really, a fair commentary on the leadership of the Newark Teachers Union: Lots of noise and money and little respect for the 50,000 Newark children and their families, whether they attend selective magnet schools (like Science Park),  public charters (regarded as one the highest-performing charter sectors in the country), or district schools.

So here’s some advice to Gov. Murphy: If you privilege the needs of students over union leaders, don’t listen to John Abeigon.

A Rumor is Circulating