NJEA and Education Law Center, Listen Up: New Jersey Charter Schools Have No Impact on Segregation. 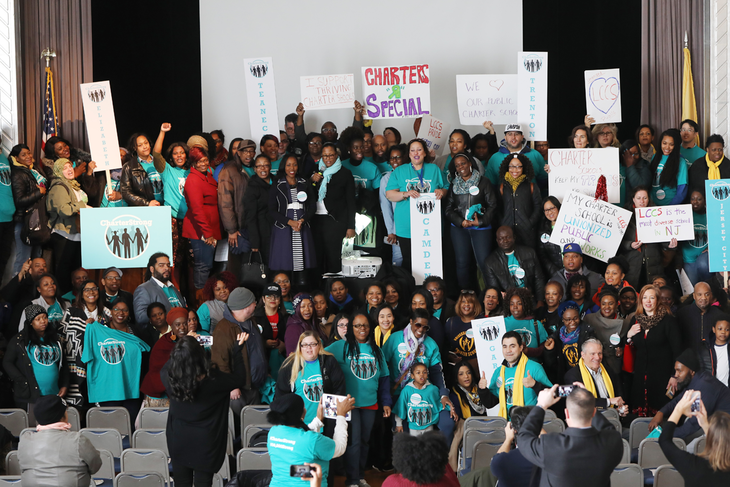 [T]here are several states where charters appear to have little or no effect on segregation, such as Arizona, Florida, Georgia, New Jersey, and Oregon.

That’s one of the results of a new national study called “Charter School Effects on School Integration” (for a short version, see here) about the impact of charter schools on racial segregation across the country. This data-based analysis, say researchers Tomas Monarrez, Brian Kisida and Matthew M. Chingos, “shows that critics are incorrect when they say that charters are driving a resegregation of American schools.” In fact, if we were to magically eliminate all American charter schools, segregation nationwide would fall by a mere 5%.

That conclusion — particularly NJ’s status as one of the states where charters have no impact at all on segregation — deeply undermines a lawsuit, Latino Action Network v. NJ, that is a thinly-veiled attack on the expansion of charter schools under the guise of caring about integration.

The Latino Action Network suit is litigated by two firms: Pashman Stein (Gary Stein in particular; his son Michael is a partner) and Lawrence S. Lustberg, both closely connected to anti-charter activities and both closely connected to the anti-charter Educaton Law Center. The suit claims that the Commissioner of Education is neglecting his “duty to ensure that at no point will the operation of a charter school increase segregation in public schooling” and violating regulations that “charters may not have a segregative effect.” The lawyers argue that charter schools increase segregation because our charters enroll primarily Black and Latinx students because, well, they’re located in primarily Black and Latinx neighborhoods. Hence, demand the litigants, listen to NJEA and stop expanding parents’ power to choose educational opportunities for their children.

But here’s the problem: Urban Institute’s researchers found that when data is uncoupled from political agendas, the impact of charter schools on school segregation in New Jersey “is statistically indistinguishable from zero.” (See Figure 3 on page 29: The zero is loud and clear.)

Indeed, the current status of the lawsuit may hint at some disarray on Education Law Center/NJEA’s side of the courtroom or, more hopefully, a moral reckoning about how deeply they’re willing to undermine a proud record of social justice. (A girl can dream, right?) After hearing opening arguments, Judge Mary Jacobson of the State Superior Court told the parties to settle. According to Attorney General Gurbir Grewal, talks were proceeding nicely but came to a halt at the end of February. Why? Because, writes Grewal (in a letter at the bottom of this post), “Plaintiff’s counsel abruptly changed course. They informed Defendants’ counsel, without explanation, that they needed a ‘reset,’ that they were dissatisfied with the progress of the settlement negotiations, and that talks could proceed only if the Defendants admitted liability. This change in position was both unanticipated and perplexing.”

There’s been no progress that I know of since that letter was written 11 months ago, just the Murphy Administration’s continued “pause”on authorizing new charters (with one exception — Creativity CoLaboratory Charter School in Elmer; go DOE!). Yet the arguments in the lawsuit, in light of the new report, shift from the duplicitous to the ridiculous. The anti-choice lawyers can obfuscate until the cows come home but their beef isn’t about segregation: It’s about market share.

In fact, some parents of color find benefits to schools that primarily serve children of color. This is not a regression to Brown v. Board of Education, which famously found that “separate is not equal.” Instead, this is a progressive stance. Richard Buery, KIPP’s Chief of Policy and Public  Affairs, argues that “denying black and Latinx children access to quality neighborhood schools because not enough white families are willing to join them would be a perversion of Brown v. Board. A court decision designed to provide black students educational opportunity should not be used to deny them that opportunity.”

But that’s exactly the argument put forth by Education Law Center/NJEA.

“Blaming charters for school segregation is galling,” said Amy Wilkins, a vice president at the National Alliance for Public Charter Schools and a longtime advocate in Washington for racial equity in education. “What Brown v. Board of Education did was say that government can’t tell black parents which public schools they can and can’t send their kids to. [Those who oppose charter schools are] telling black parents, who overwhelmingly support charters, that they can’t send their kids to charters anymore.”

I believe black folks should resist integration proposals as the sole or primary educational interventions necessary for our children to succeed. We lost so much by placing our faith in the social engineering of schools that robbed us of black educational capital and infrastructure. Our teachers fired. Our principals demoted. Our children handed over wholesale to an education establishment that had no reason to love them.

Stewart goes on to cite a number of educators and researchers — Virginia Williams, Dr. Kenneth Clark, James Coleman, W.E.B. Du Bois — who came to the conclusion that “Brown [v. BOE] is not the big idea for ending the gap between black student underperformance and black educational excellence; it’s not the key to breaking the cycle of poverty for many black families; it’s not the key to making white people less racist, and it’s not a school reform that will restore the teaching and learning that existed before the illusion of integration wiped away our assets.”

“We have learned through education reform,” Stewart continues, “that it is possible to build schools with black children’s needs in mind, schools that help them reach their potential. Some of these schools are charters, some are magnets, and some are traditional district schools that reject the idea that the brilliance of black children can be ignited only by the torch of white peers.”