The Flogging Will Continue Until Morale Improves: Jersey City Residents Get Cheated Out of the Democratic Process. 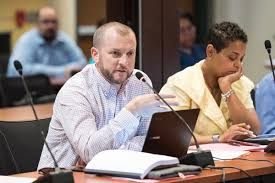 The farce that is the Jersey City Board of Education continues unabated. I’ve written before about the ethical lapses by Board President Sudhan Thomas and  Board member Lorenzo Richardson, as well as  the Board’s habit of deferring to the local teacher union, including during contract negotiations. The lone holdout for moral propriety has been Board member Matt Schapiro. He tried his best to achieve at least a small degree of transparency with Jersey City residents but recently moved out west and, so, resigned from the Board.

And that’s when the most recent corruption occurred.


Schapiro submitted his letter of resignation (see below) on May 31st. According to NJ Rev Stat § 18A:12-15, if a school board holds elections in November (as Jersey City does) and a member resigns on the third Monday in July (as Matt did), then “any vacancy for the remainder of the term shall be filled at the annual election next succeeding the occurrence of the vacancy, as the case may be.” In addition, according to NJ Rev Stat § 19:60-7, “the school business administrator thereof shall certify to the county clerk no later than the day of the holding of the primary election for the general election next occurring a statement designating the public offices to be filled at such election, and the number of such offices to be filled.”

Translation: If a board member resigns before the third Monday in July then his or her seat is filled through the democratic process of voters choosing a placement during the general election in November. It’s on the district Business Administrator [BA] to inform the County Clerk’s office that there is an opening for an unexpired term so that seat is listed on the ballot.

But this is Jersey City. Schapiro resigned three weeks before the statutory deadline yet voters won’t be able to select their representative because the BA didn’t bother to tell the county clerk. Yesterday Schapiro told me, “what’s clear is that the Board is operating in a semi-lawless manner and they would prefer for an insular group of six board members to choose my replacement themselves rather than allow the democratic process to proceed as it should for the people of Jersey City.”

Schapiro was incensed enough by this flouting of propriety that he issued a press release:

Seeking new levels of dysfunction, Jersey City Board of Education leaders attempt theft of board seat

Monday July 29, 2019 — The Jersey City Board of Education is unlawfully attempting to retain the seat of resigned board member, Matt Schapiro, instead of placing his position on the ballot for this November’s election.

Mr. Schapiro submitted his resignation to the Board on May 31, 2019 with an effective date of July 15, 2019 (resignation letter attached). Jersey City Board of Education may appoint a temporary replacement for Mr. Schapiro. But according to NJ law, Mr. Schapiro’s permanent replacement must be on the November ballot for voters to decide.

Jersey City Board of Education leadership is attempting to defy the citizenry of Jersey City by taking away the citizens’ rights to vote upon Mr. Schapiro’s replacement for the remainder of his term.

Mr. Schapiro says, “This truly anti-democratic act has brought the Jersey City Board of Education to a shocking new low.”

I asked Schapiro if he’d had tried to contact the Board. “I’ve been emailing and calling  Business Administrator Regina Robinson and Acting Superintendent Franklin Walker since Monday,” he said.* “But the BA takes her cues from Sudhan Thomas.” What about the County Clerk’s office, I asked, because they create the ballot?  “The people I spoke to at that office said they have to put on the ballot what the BA tells them to.” But Jersey City has a State Monitor, I noted. Did he take any action? “Nope.”

“This isn’t about me,” he continued. “It’s about the rights of the people of Jersey City to be able to select the person they want to represent them. But this insular group of board members will attempt anything to consolidate their own power, even when it comes at the expense of the Jersey City voting community.”

“These board members,” he mused, “are heading down a lawless road and their actions become more and more brazen because there is no accountability for their increasingly brazen conduct.”

The victims here are taxpayers who will have to foot a sweetheart deal with the teacher union, voters who have been disenfranchised by a ego-driven, arrogant school board, and families who send their children to a district that eschews accountability.

This isn’t the way democracy is supposed to work.

Please accept this letter as notification to you that I resign my elected position on the Jersey City Board of Education effective Monday, July 15, 2019.

In accordance with N.J.S.A. 19-60-7, please inform the County Clerk that my position will be on the ballot November 5th.

*Note: the Board put Superintendent Marcia Lyles on administrative leave this past February after the Board tried and failed six times to fire her. She’s suing Sudhan Thomas, two other board members, and JCEA, the teachers union. Jersey City and state taxpayers will continue to pay her $231K salary until her contract expires in June 2020. School boards are required to annually evaluate superintendents. The Jersey City board hasn’t evaluated Lyles since 2014.

Paranoia, according to Woody Allen, Is Simply Knowing All the This May Be The Beginning of a Beautiful Friendship: A