Voices From the Parent Summit: An Interview with Ruthven Haneef Auguste. During this past weekend at the New Jersey Parent Summit (see here for an overview) I chatted with many parents. Over the next two weeks I’ll post some of the interviews. In some I’ve added links and editorial comments to add context. Here’s Newark dad Ruthven Haneef Auguste, who told me about his own school experiences and how he has fought for better outcomes for his three daughters.

Laura: Haneef, can you tell me a little about your own school experiences?

Haneef: I went to school in Irvington [a district that abuts Newark] and then finished at East Orange High School [another district that abuts Newark]. When I was in school it wasn’t cool to be smart. I used to straddle the fence between being cool and being smart and I’d feel pressured to tone down my smartness. I didn’t want that for my kids. I wanted them to be able to be themselves at all times.

Laura: That’s why you sent them to KIPP? And, by the way, congratulations about your daughter!

Haneef: Yup! She just graduated last month from Newark Collegiate Academy [KIPP’s high school in Newark] and she’s got a full ride to the University of Notre Dame!

Laura: How did that happen?

Haneef: Well, she’s brilliant: National Honor Society, Salutatorian of her class, a GPA of 4.25. This girl is going somewhere. Last summer the  KIPP Through College Program counselor helped her helped her apply to a summer law program at Notre Dame. The university paid for the two-week course and KIPP paid for her flight. So when it was time to apply to colleges she already had that on her resume, already had the confidence she needed. She wants to be a lawyer. So when I tell you KIPP works, I’m speaking from experience.

Haneef: Yup, I have three. My oldest got a full ride to Lincoln University. I tell my kids, I don’t have college money so you have to get it yourself. You have to get good grades: That’s your only job. That’s what’s going to save your life.

Laura: And how about your youngest daughter?

Haneef: She’s been at KIPP since kindergarten. Now she’s 13.  She has Asperger’s: She’s super smart and knows all the academics  but socially she struggles. She gets in trouble, breaks rules all the time.

Haneef. She has a 504 [a plan for how the school will provide support and remove barriers for a student with a disability]. We’re working with KIPP to figure out what works for her. She needs advanced academics but those programs are not set up for kids with problems. I do appreciate that KIPP has a partnership with me to make this work for my daughter. There’s lots of phone calls, lots of compromises, continued effort. I know that if she were in a different school she would get into trouble less but she’d also learn less because the bar is so low.

Laura: KIPP is almost entirely African-American. Does it bother you that it’s so segregated?

Haneef: Look, segregation is a self-imposed situation nationwide. The white parents who move away, like they did from Newark, congregate somewhere else and then that school becomes majority white. It doesn’t have to do with charter schools — it has to do with red-lining and affordable housing.

My aunt works for the Wight Foundation, which sends kids from Newark to white boarding schools. She takes them in 7th grade to ramp up their academics so they’ll be prepared. She tried to get me to go when I was in 11th grade.

Laura: Why did she want you to leave the Newark area?

Haneef: Look, I’m not the “get bullied” type. I told her I couldn’t go because I was very aggressive. Trust me, it would not have gone well. As for my daughters, all three didn’t want to go. They’re strong young women. KIPP is an environment where they’ve had the same friends from the beginning. It’s more than just a school. We all know each other and lean on each other. It’s a community.

Laura: What if you had a chance to send them to Millburn High School [a very high-performing white and wealthy district near Newark]?

Haneef: I wouldn’t send them to Millburn High School. Are you going to send Millburn kids to [Malcolm] Shabazz [a district high school in Newark where 11% of students meet expectations in reading and none in math]?

Look, the formula to calculate the area of a square is the same in the books in Millburn and in Newark. I don’t need any white fairy dust for my kids to learn. I’m a mechanic, a problem-solver. If you get rid of charter schools, you’re just taking away my options. How does that help me? Go ahead, let them sue the counties to open up all the schools to all kids.

That’s what they do in Georgia, you know. If you live in Tyrrell County you go to Tyrrell County schools. I’m all for county systems but the idea that charters are the problem is ridiculous. Hey, anyway, if you send my Anaya to Millburn she’ll kick those kids in the jaw. She already got thrown out of karate class for beating up a boy.

The cure to segregation is for neighborhoods to be integrated. That’s an economic situation. You can’t make people decide to live with each other. You can’t make people who come from different happenstances be in the same space. I don’t feel comfortable in the suburbs. I can’t just go in my backyard and make lots of noise. It’s not because the people are white, it’s because I like fixing cars in my front yard. Black people like to crack jokes on other people all the time. We understand each other culturally. We understand how far to go.

The ones making the policies are not the ones living it. I guarantee you every one of those lawyers [involved in a NJ lawsuit that claims charter schools increase segregation] is living in a segregated neighborhood. Great! You move to Newark! Let’s see how serious you are! You move your family into a black space and then you can talk to me, but not if you’re living in a segregated one. 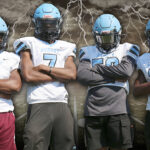 Here’s your cognitive dissonance for the week: