Five Facts About A Request to Intervene In a Lawsuit Seeking to Deny School Choice to Low-Income New Jersey Families. 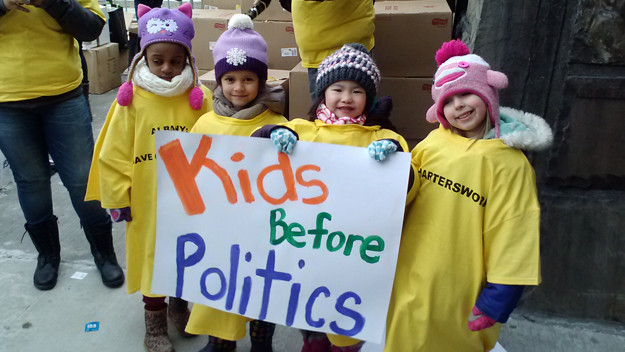 Yesterday a group of New Jersey public charter school parents, a Jersey City charter school, and the NJ Charter School Association (NJCSA) filed a motion to intervene in a May 2018 lawsuit filed by the New Jersey Coalition for Diverse and Inclusive Schools and litigated by a law firm called Pashman Stein. The Pashman Stein lawsuit charges that former Education Commissioner David Hespe’s 2016 approval of expansions in seven (now six) Newark charter schools should be overturned because the expansions decrease “the amount of money available to serve students in district schools” and increase “the segregation of at-risk children within the district’s schools, as well as racial segregation within the charter schools.”

These are old arguments, endlessly recycled by those who believe  that offering parents public school options — specifically low-income urban parents of color trapped in struggling districts — is somehow a violation of the traditional school-state covenant. This is in spite of the fact that all the charters slated for expansion are ranked “Tier 1” or “Top-Performing,”  by the State.

Education Law Center filed an earlier lawsuit with Pashman Stein to try to stop the expansion of Newark charter schools. You can read that filing here,*the Newark charters’ response here. and profiles of the parents hoping to intervene and the NJCSA press release here. In the interest of brevity (stop laughing at me) I’m going to list five highlights that mark one of the silliest skirmishes in the New Jersey charter school wars.

ELC made its bones litigating the Abbott v. Burke cases which established back in the 1990’s that because NJ districts are largely funded by local taxes, educational equity could only be achieved if our poorest districts got compensatory funding from the state. (The Justices noted that there were other districts beyond the 31 on the Abbott list that probably deserved extra funding and that extra money without substantive education reform would do little to help low-income children gain access to their Constitutionally-guaranteed “thorough and effective” education. See Abbott II.)

Since that time ELC has spent much time protecting the extra aid provided to Abbotts, which in Asbury Park raises the annual per pupil cost to $42K. ELC is all about cash, not about kids. Witness that the briefs submitted by ELC make no mention of student academic growth. In contrast, the NJCSA motion leads with the educational progress of Newark charter school students. Also worth mentioning here: ELC’s biggest funder is NJEA, NJ’s teacher union, whose leaders have demanded that their lapdog Phil Murphy maintain a charter school moratorium.

Pashman Stein is a law firm with close ties to ELC and NJEA. The elder of the two Steins, Gary (his son is Michael) sits on ELC’s Board of Directors. Other trustees of ELC include Vince Giordano, NJEA’s former Executive Director, and Ed Richardson, NJEA’s current Executive Director. Pashman Stein joins ELC in claiming that charter schools exacerbate school segregation and positing preposterous claims like it’s “unlawful” that  “charter schools prioritize enrollment of students from the district in which they reside.” (Let’s count the number of parents from Millburn and Montclair who want to send their kids to school in Newark.)

2. Charter Student Outcomes in Newark Are Ignored by ELC and Emphasized by NJCSA.

According to the most recent data, African-American students in Newark are four times as likely to enroll in a school where students outperform the state average than they were in 2006. Last year, for the first time, Newark charter students in grades 3-8 eliminated the achievement gap and outperformed the state average in both English language arts (ELA) and mathematics on PARCC. Researcher Jesse Margolis discovered that Newark used to be a below-average district compared to its socioeconomic peers and now ranks in the top 25 percent, writing that student achievement in Newark since the advent of charters has “improved in a meaningful and substantial and important way.” A Stanford University study shows that Newark had the second highest performing charter sector in the nation and that charter school students gained “an additional seven and a half months in reading per year and nine months per year in math compared to their traditional public school counterparts.” A recent Harvard study shows that  the growing charter sector benefits all students, charter and traditional: “Upon leaving the closed schools, students and their parents moved to higher-growth district and charter schools. We find that the rate of growth for these students also improved on average after they moved to their new schools.”

Sure, ELC/Pashman Stein. Let’s shut that down. (I wish there were a better word than “irony” that captures the confounding incongruity of an organization once devoted to the educational well-being of low-income kids now suing to shutter those students’ best chances of academic success.)

3. Provenance of Research Cited by ElC: Rutgers, Are You Seeing This?

In its lawsuit ELC cites a report (see page 14) that it calls “a Rutgers University research report (Rutgers report).” This synecdoche leaves out a salient fact: The “report” (see here) was written by Mark Weber and Julia Sass Rubin, both staunch anti-charter advocates who have received funding from NJEA. The report itself was funded by the anti-charter Daniel Tanner Foundation.  Rubin, at the time of the report, was a trustee of the Danner Foundation. I wrote about the report  here if you’re interested in my take. Or listen to Newark mother Crystal Williams who wrote in the Star-Ledger, “Who is Julia Sass Rubin and what does she have against my kids?” (Ms. WIlliams was responding to a comment Rubin made to a reporter: “People in abject poverty don’t have the bandwidth to even evaluate charter schools. . . .It’s just not going to be high on their list.”)

One other thing: how does Rutgers feel about ELC linking a flawed analysis to the University’s  proud reputation? A bit dragged-through-the-mud, perhaps?

One of the two planks of ELC’s argument is that the growth of charter schools in Newark has led to budgetary problems within district schools. That’s absolutely true. New Jersey has a wacky way of funding charters: the State sends the per pupil funding to the traditional district, which then writes checks to individual charters. (Technically districts are supposed to send 90% of per pupil allocations; in reality, it’s less because districts keep more than 10% and charters don’t get Adjustment Aid or facilities aid.) So it really feels to districts that charters are taking money right out of their pockets, even though our school funding formula is based on the premise that “the money follows the child.”

But there’s also this: Newark administrators have copped to the fact that the district “engages in a pattern of overspending,” especially on employee salaries and benefits. They also admit that the district overclassifies students as eligible for special education. And let’s get real: As Newark district school enrollment drops, there will be fewer employment opportunities for traditional school teachers, administrators, and other staff. Shift happens.

Which leads us to ELC’s second plank:

In fact, charters haven’t led to increased segregation in Newark and in its press release on the motion for intervention NJCSA stresses its partnership with the Diverse Charter Schools Coalition. Conveniently, this past summer the Urban Institute put out a report called “Charter School Effects on School Segregation.”  As I wrote here,

Urban Institute’s researchers found that when data is uncoupled from political agendas, the impact of charter schools on school segregation in New Jersey “is statistically indistinguishable from zero.“

I used the word “brevity” earlier. Sorry about that. But I feel compelled to add one final point. In August at the NJ Parent Summit I had the opportunity to talk to quite a few charter school parents. In a few cases I asked them about ELC/Pashman Stein’s contention that charter schools increase segregation.

“I don’t believe we are segregated because of charter schools. We’re segregated because of socio-economic factors including housing, job-market, and, of course, poor education. Charters have nothing to do with that…There’s still not enough high-quality schools in inner-city neighborhoods. Parents need options. It is our right as parents to choose the strongest schools in our community for each of our children. Poor schools should never be an option. It’s not about segregation. It’s about public school quality.“

“Look, the formula to calculate the area of a square is the same in the books in Millburn and in Newark. I don’t need any white fairy dust for my kids to learn. I’m a mechanic, a problem-solver. If you get rid of charter schools, you’re just taking away my options. How does that help me? I guarantee you every one of those lawyers [involved in the ELC lawsuit] is living in a segregated neighborhood. Great! You move to Newark! Let’s see how serious you are! You move your family into a black space and then you can talk to me, but not if you’re living in a segregated one.“

“My son and daughter’s public charter school is a great school close to home, where s/he can go to school with students and teachers that reflect our community,” said Tafshier Cosby-Thomas, a parent intervenor from Newark. “Integrated schools are a good thing and diversity is important. But we need quality schools in all our neighborhoods, even in communities where residential integration has not been achieved yet.  Parents should not have to choose between supporting existing good public schools and pursuing integration.“

*I wrote originally that ELC was representing the plaintiffs in the Latino Action Network lawsuit. I was wrong: ELC made a separate filing .