Spare Me The Tulips: Fragile X Syndrome, A New Drug Trial, and A Few Reflections 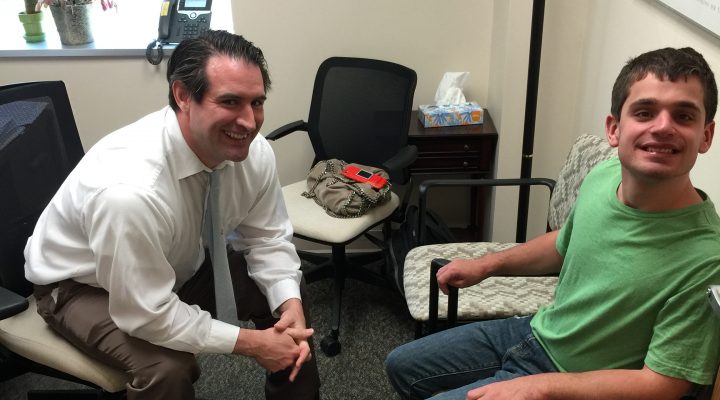 It’s hard work being a parent. In a family like mine that values intellectual pursuits, I think it’s that much harder when your child has cognitive deficits. I confess that even now, 24 years after my son’s birth and 22 years after his diagnosis of Fragile X Syndrome, I still, on occasion, find myself indulging in fantasies that my son is magically rendered neuro-typical like his three siblings.

I know that’s not very “woke” of me. I’m supposed to quote that famous Emily Kingsley poem and wax eloquent about the unexpected joys of taking a trip to Holland instead of Italy. So sue me.  I love my son to the moon and back — his compassion, his humor, his soul, his own quirky form of intelligence —  but spare me the tulips: I’ll take “ordinary” every time over special, differently-abled, atypical, whatever PC term you prefer.

I cherish my son for who he is but that doesn’t mean I can’t hate the genetic glitch that limits his life.

At times those daydreams still lure me.  I don’t think that’s too unusual, especially because scientists are working on a cure — or at least a therapeutic strategy — of compensating for the cause of Fragile X Syndrome: a missing protein called FMRP. A few months after my son was first diagnosed, I went to an international conference sponsored by the National Fragile X Foundation. Everyone was so excited! Researchers had  just created a “knock-out mouse,” i.e., a mouse missing the FMRP protein. Five years until a cure, doctors told us! Ten at the outside!

That was twenty years ago. (Damn you, blood-brain barrier.) Meanwhile, other studies have pointed to possible ways to indirectly lessen the impact of that missing protein, which can cause a constellation of symptoms including cognitive delays, anxiety disorders, communication disorders, autistic-like behaviors, and, in some cases, full-blown autism. My Facebook Fragile X groups are currently buzzing with news of a drug used for diabetes called metformin. Some parents have managed to get the drug prescribed off-label and report their children exhibit decreases in hyperactivity, social avoidance, and irritability. (Fringe benefit: The drug seems to curb appetites for people with FX who have weight gain from anti-psychotic medications or lack of portion control.)

Here’s where I make a plug, especially to parents of adult children willing to travel to South Jersey: The FRAXA Research Foundation is funding a clinical trial of metformin for men and women, ages 16-50, with Fragile X Syndrome. I spoke to Dr. Sean McBride of Rowan University, who discovered the impact of metformin in his laboratory using fruitflies and those handy knock-out mice. He’s conducting a randomized double-blind controlled trial of metformin (this means that half the subjects get the drug and half get a placebo) at the Rowan School of Medicine at Rowan University in Glassboro.

Dr. McBride told me, “we know we can use metformin safely, although many diabetes medications are dangerous to people without diabetes. But metformin has a totally different profile. While many people are getting it off-label, we really need a clinical trial to ascertain the correct dosages and the actual efficacy. We need to standardize the drug to maximize its benefits.”

He added, “To evaluate the efficacy of the medication you need to be able to do a randomized placebo controlled trial because, particularly with autism trials, there are enormous placebo effects. Without  the trial we will never know what really works.”

I asked him if people in the trial would need to go off of their current meds (a drawback we’ve had with other trials we’ve considered: My son without zoloft? No way). The answer is “no,” unless there is something specifically contraindicated. The clinical trial will last 24 weeks with four visits: A baseline initial visit, a second visit at 6 weeks in, another at 12 weeks, and another at 24 weeks.

If you have more questions about this trial or want to enroll your child, email Dr. McBride at  [email protected] If your son or daughter participates in the study, you can continue to see Dr. McBride for follow-up treatment.

Meanwhile my husband and I cuddle our boy as we watch endless repeats of Food Network shows,  acknowledge a wee bit of envy for empty-nesters, and count ourselves lucky that our son was spared the worst outcomes of his condition.  Just don’t bring me any tulips.

Have We Reached a Consensus on How to Achieve Education