Top Democratic Candidates’ Disrespect for Parents of Color Has Me Wondering If I Fit Into This Party Anymore. 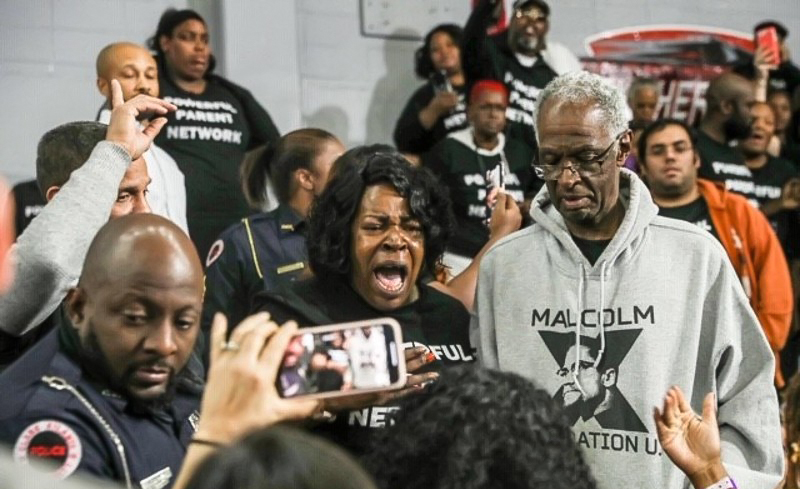 Politico reports today that Elizabeth Warren’s support among Democratic and left-leaning Independent primary voters “plunged 50 percent over the past month, according to a new Quinnipiac University poll.”  The article speculates her “plummet” may be due to her “Medicare for All” plan, but, in a fit of wishful thinking — educational equity advocates should have such sway! — I wonder if Warren’s loss of support is at least partially due to last Friday’s news that 300 Black and Latino parents travelled to Atlanta and challenged her obtuse and union-pandering opposition to public school choice.

I’ll indulge myself further by hoping that our leading Democratic candidates (all white) will rethink their elitist, racist positions that betray families red-lined into long-failing districts in order to curry favor with fat-pocketed union leaders and status quo defenders.

Much has been written about Warren’s collision with low-income parents of color who, led by Sarah Carpenter, grandmother of 15 and member of the Powerful Parent Network, made their way to Warren’s rally last Friday after raising money through a GoFundMe campaign because they were turned down by traditional funders. The New York Times quotes Margaret Fortune, head of a non-profit that operates seven charter schools in California:

“What would be happening in a fair society is we would be asked for our opinions, rather than having candidates saying, ‘I have a plan for you — to shepherd you into the very schools that you left on purpose,’” said Ms. Fortune, a black, lifelong Democrat.

Chris Stewart, a Black education activist who is CEO of Education Post (where I work), writes,

If Democratic candidates for president—indeed, candidates from all parties—wish to be true representatives of all Americans, they will stop taking sides in the education wars, stop pitting parents against each other, and stop acting as if children are less important the moment they enter a charter or non-traditional schools.

My colleague Vesia Hawkins, a member of the Powerful Parent Network who made the trip to Atlanta and hopes the demonstration becomes “a clarion call to the Democratic party,” writes,

I’ve been in this Black body for 48 years and have seen some things so it’s not surprising that our collective Blackness (and Brownness) has no value to the Dem party when we dare question the party line. The media, all too eager to push the narrative, discounted our voices, cheapened our agency, and disrespected the individual fight of each mother and grandmother in their respective communities.

Civil rights leader Howard Fuller, who accompanied the group to Atlanta tweeted this:

(The “lie” refers to Warren telling the parents that all her kids went to public school although her campaign had to walk that back when it turned out she sent her son to a $18,000 a year private school. @LadyTenn is Sarah Carpenter’s twitter handle.)

In addition, “public charter schools in Jersey City and Trenton saw very strong gains in 2019” (in spite of NJ’s inequitable funding of charter schools  — 73 cents on the dollar compared to traditional schools — and no facilities funding).

Yet in this state, led by a Democratic governor who considers himself “progressive,” 35,000 children, largely low-income and of color, sit on charter school wait lists enduring a seemingly endless moratorium on the DOE’s authorization of new charter schools. The parents of these children, like Sarah Carpenter says, “want to do is be able to choose where our kids go to school.” So why are our leading Democratic candidates — Warren, Sanders, Buttigieg, and Biden, all white and rich — determined to betray them?

Oh, I know the easy answer: It’s the teachers unions, stupid. They need the money and the ground game and the endorsements.

But they also need the votes from Black and brown Democratic voters.

I’m a lifelong Democrat, a New York Jew. My first experience in politics (yeah, I’m old) was tailing along with my mom to stuff envelopes for George McGovern’s campaign. I was raised to honor the values of a party that embraced those striving to attain the American dream, regardless of color or country of origin or income-level.

I can’t claim the authenticity of Sarah and Vesia — I’m white and financially-secure and live in a good school district. But I feel betrayed by the Party my parents worshipped. Warren, Sanders, Buttigieg, Biden, or whoever wins this thing, should embrace and support parents who just want what they all have — the freedom to choose. How basic is this? How essential to Democratic values?

Instead, as Vesia says, they discount and cheapen and disrespect these parents.

Elizabeth Warren told the parents in Atlanta that she’d reconsider her plan to cut off all federal funding to charter schools. Maybe she will. Maybe she’ll embody the values that, at least in the arena of public education, many top Democrats have shed like dross.

Until then it’s hard for me to consider myself a Democrat.

NJEA’s “Punch List” of Everything Wrong with Camden Public Schools