The King Is Dead, Long Live the King: What Does Repollet’s Departure Mean for New Jersey’s Education Department? 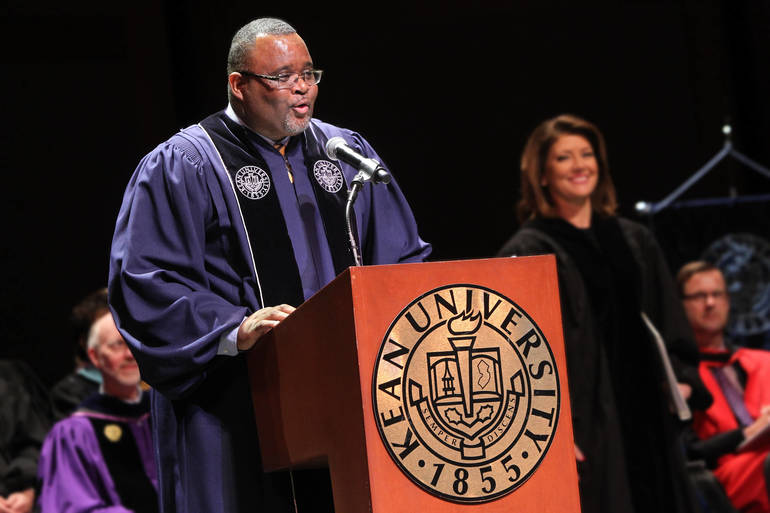 Last night the Board of Trustees of Kean University, one of New Jersey’s public colleges, voted to install current Department of Education Commissioner Lamont Repollet as its new president. This was not a surprise: I first reported on rumors within the DOE of Repollet’s Kean ambitions in June 2019. The more interesting questions are 1) Who are the likely prospects to replace Repollet and 2) Why is he taking the job at Kean?

When Repollet was Superintendent of Asbury Park Public Schools, his credo was embodied in what staff call the “64 Floor” (see here, here, and here). During a faculty meeting Repollet told a group of administrators, “I don’t  think it’s good for the self-esteem of students to keep failing test after test that they already know they’ll fail.” With such low expectations for the district’s largely low-income students of color, he created a system where, indeed, no one ever fails. Then, when Governor Phil Murphy nominated Repollet as Commissioner (pointing to the 30% increase in Asbury Park’s graduation rate without mentioning the rise came from forcing teachers to pass students regardless of proficiency and creating busy work for students that masqueraded as “credit recovery” programs), he brought the 64 Floor philosophy to the Department of Education.

I’ve been highly critical of Repollet’s stewardship of New Jersey schools, largely because, in my view, he tried — and in many cases succeeded —in creating a state education department that is Asbury Park writ large. Implementing a promise from Murphy to NJEA leaders, he cut state standardized tests from 6 to 2, muddying our ability to identify student growth trends in order to perpetuate the pretense that all our schools are great. He failed to address our widening achievement gap between white and black students, now a gaping 31.7 points. He cut the link between teacher evaluations and student outcomes. Senator Teresa Ruiz, Chair of the Senate Education Committee, said in February,

The DOE has been transparently clear in their goal to dismantle teacher evaluations with the actions that they have taken. If their goal was to do away with evaluations, then I would prefer that people would just be up front…Every time we do something to dismantle any kind of checks and balances in our school system, the ones who have the most to lose are communities that are in underperforming districts.

In addition, Repollet told a Senate committee that “teachers weaponize grades” and withholding diplomas from districts like Asbury Park, where only 15% of students reach proficiency in math and reading, is “the opposite of equity.” A year and a half ago (again implementing a promise Murphy made to NJEA) he put a hold on new charter school authorizations (despite the 36,000 students on wait lists) by conducting a “Charter School Act Review.” This was supposed to culminate with a report that has never been issued. (If you click on the DOE link that used to contain information about the Review, you now get a message that says “404 Error – Page Not Found. The page you have requested cannot be displayed because it does not exist, has been moved, or the server has been instructed not to let you view it.”

Repollet’s legacy, then, is a state school system with reduced accountability, dumbed-down standards and assessments, a dismantled teacher evaluation system, along with a culture of nepotism and a disdain for school choice. Not to pile on, but the DOE has utterly blown the pandemic-induced pivot to remote instruction, largely because Repollet eliminated the Office of Educational Technology.

I’m probably being too hard on him. He was just carrying out Murphy/NJEA’s orders and, in that sense, was the right man for the job.

So who will be our next Commissioner?

Two names being floated are Linda Eno and Cary Booker.

Inside sources recently confirmed that Eno, Assistant Commissioner for the Division of Academics and Performance, is retiring in June. So maybe the rumor is wrong. Or maybe she will be persuaded by Murphy or Repollet to take over as Commissioner.

Back in June 2019, when the rumor about Kean first surfaced,  Repollet hired Cary Booker as Assistant Commissioner for the Division of Early Childhood; the grapevine wondered whether that was a strategic set-up. (Booker has no background I can find in early childhood education.) Yet his younger brother, Senator Cory Booker, has said of him,  “[he] always was one of my greatest guardians, mentors, teachers and friends. He is truly the epitome of a gentle man, one of the kinder people I know with a depth of goodness and decency in his soul that overflows endlessly into the world.”

Myself, I find much to admire because Cary Booker has an impressive resume: Co-founder of Omni Care Academy, a public charter school in Memphis; a professor of education at the Newark campus of Rutgers University; advocacy partner at the Newark Charter School Fund. At one of my favorite annual events, the NJ Parents Summit, he told a reporter,

I hope that this kind of event can bring parents together for ways to strengthen their communities. It’s really exciting to see this kind of energy around education reform. I would hope that parents come away feeling empowered, gain useful information and with an idea of what their next step is as far as how to be engaged with their communities…We hope to see a real discussion about what Newark’s educational system will look like in this new era. Newark is uniquely poised for this.

When asked about the friction (much abated in Newark) between charter and district parents, Booker commented on “the way the narrative plays out drives the divide,” noting that charter and public school parents are striving for the same outcome. “We all want to see an outstanding system of public education that is meeting the needs of our kids.”

But would NJEA really let Murphy appoint a school choice supporter? Seems unlikely to me. Maybe Murphy will just promote his Deputy Chief of Staff Deborah Cornavaca, a former chief lobbyist for NJEA and other affiliated organizations.

Second question: Why is Repollet willing to take on the presidency of Kean University, which its outgoing president Dawood Farahi said yesterday was on the verge of a “humongous” financial blow from the coronavirus that is forcing the elimination of departments and staff reductions? From Politico: “At minimum, Farahi said, the school is expecting to lose at least 500 full-time students, further crushing revenues and leaving a $12 million to $15 million budget hole.” That’s not good news, on top of the state’s recent freezing of $113 million in allocations to higher education.

Also, Kean University, according to U.S. News, is considered a “lower quality college at an expensive price,” with a bachelor’s degree costing about $143,175.  It is rated “less selective,” with an acceptance rate of 86%.

But there is ample compensation for this thankless job, starting with an annual salary of  $365,000, a lot more than Repollet makes at the DOE. His predecessor Farahi had some nice perks too, which I assume Repollet will inherit: a “presidential house,” luxury car, one-year paid sabbatical, and a liberal expense account.

For the moment let’s call it a win-win for both Repollet and New Jersey. Yet the final verdict is completely dependent upon whom Murphy chooses as his new Education Commissioner. Will he have the strength to buck lobbyists and choose someone who will honestly confront systemic challenges, especially in low-income communities, and embrace high standards, accountability, and parent autonomy? Stay tuned. No Mazel Tov for Chris Christie’s Brother, Who Hosts Son’s