At A Loss For Words, Knowing I Need to Speak

This is a guest post by Patrick Riccards, executive director of Best in the World Teachers. Riccards, a resident of West Windsor, NJ, previously served as chief of staff to the National Reading Panel and as director of the federal Partnership for Reading Collaborative. He is the author of Why Kids Can’t Read: Continuing to Challenge the Status Quo in Education. This first appeared on brightbeam’s Project Forever Free.

I’m at a complete loss for words, yet I feel a strong need to speak out.

I know I need to speak out regarding George Floyd. And Ahmaud Abery. And Breonna Taylor. And David McAtee. And the long list of men and women of color who are no longer capable of speaking out. Yet I also feel whatever my voice or my actions can add is inadequate.

I will never pretend to be someone who truly understands what those from other races, other states, or other socio-economic statuses experience on a daily basis. While I want to possess such knowledge, it is arrogant of me to think I do know. I like to believe I am empathic because of my own experiences and my own family.

Eight years ago, when I was advocating for k-12 education reform, I spoke often on how “Black and Brown kids” were not receiving the quality of public education they needed, deserved, and to which they had a right. I was taken aside by both those in power and those I was working alongside in reform, and told that using “Black and Brown kids” made too many people feel uncomfortable. I noted that the issue was we were largely failing African-American and Latino students, so what words would they use? The response? They would all be more comfortable if I just used the term “urban kids.”

Yes, in a fight for education equity, I was told it would make those who held power – as well as many of their white allies – more comfortable if I adjusted my rhetoric. From that point forward, I made sure to use the term “Black and Brown kids” every single time I spoke out on the need to improve public education. I still do.

It didn’t matter that the term was correct, as was the intention that we were shortchanging children of color. It didn’t even matter that I myself was a father of two of those “Brown kids,” the dad to two Latino children adopted from Guatemala. And while I’ll never know what it is like to be young and poor in Guatemala, I do like to consider situations, conversations, experiences, and perspectives through the eyes of families that look like my children.

Four years ago, my Latina daughter had to face the hateful words of a fellow third grader. That boy took to the school playground to excitedly taunt my daughter, stating that he couldn’t wait until a wall was built between the United States and Mexico, and how my daughter could be forced to build that wall, and how once she was done, she could be placed on the other side of it where she belonged. My wife and I had to use that week to teach our eight-year old how she needed to find her own voice.

Nearly three years ago, I was so disgusted by what was happening in Charlottesville, a town I called home for four years as a student at the University of Virginia, that I felt compelled to offer the words that I wished we were hearing from our leader in the White House, but never did hear. I felt it was the sort of rhetoric that we need to begin to heal, to begin to address the problems, and to begin to do what is right.

A month ago, I needed to talk with both of my kids about racist videos featuring a senior at our local high school, vile Tik-Toks that played to the worst of racist tropes. And I had to do so as the majority of parents in our community on social media were defending the young man with the typical, “boys will be boys” and “let’s not ruin his life because of one little mistake” defenses often offered by those in privilege afraid of losing it.

And now in the last week, we’ve had to help our two children understand the George Floyd situation and our nation’s reaction to it. Answering questions our daughter had as to how the police officer could kill Floyd when they had been friends for 15 years. Having to have a more pointed discussion with our son about the reality of him being a young man of color in the United States today and what that means.

Yes, in my own struggles to find the right words to speak out, I’ve mostly reflected. I’ve reflected on the slights – perceived and real – that my children have received over the years or that we have faced as a mixed race family. I’ve reflected on my own actions, my own words, and the unconscious biases I may have demonstrated over the years. I’ve reflected on my experiences the past three years coaching competitive cheerleading, and about the quarter of my 19-tween-girl squad that is African American and the nearly half of the squad that are young women of color and think of what more I can do and should do to ensure our mat is a safe space from all this around us.

I’ve also reflected on two decades of work in education and in education agitation, wondering if we have been asking the right questions or fighting the right battles. Are we actually teaching future generations of teachers about equity and social justice, as so many ed schools today claim, or are we merely checking the box? Are we actually doing all we can to recruit teachers of color – particularly males of color – or are we just doing it until it gets too difficult? Are we actually ensuring that all children receive a high-quality education, or are we just willing to accept equity of inputs when we think equity in outcomes is impossible? And are we willing to have the truly difficult conversations in our public school classrooms and around our kitchen tables, while actually providing young people today the opportunity to talk about painful issues and take issue with the way things are or the powers that be?

From the Boston Tea Party to the riots of 1968 to today, history shows us that civil disobedience and speaking truth to power is messy. It can be violent. It can tear a nation (or an aspiring one) apart at the seams. And it can also be necessary for our society to confront its problems, to evolve, and to become a little better for the citizens that make up our great representative democracy.

As a parent, a teacher, a coach, and an American, all I can do is help my children and those like them find their own voice. To encourage it, to help it, and to amplify it. I can’t find my own words, because I do not believe it is the time for my voice to be heard. It is time for millions of voices to be raised and amplified as they speak truth to power. 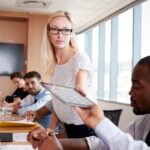 MCKENNA: Whatever You Think About School Closures, Here’s How To Be Heard in Your District

NJEA is Not My Public School Teacher, Says N.J.