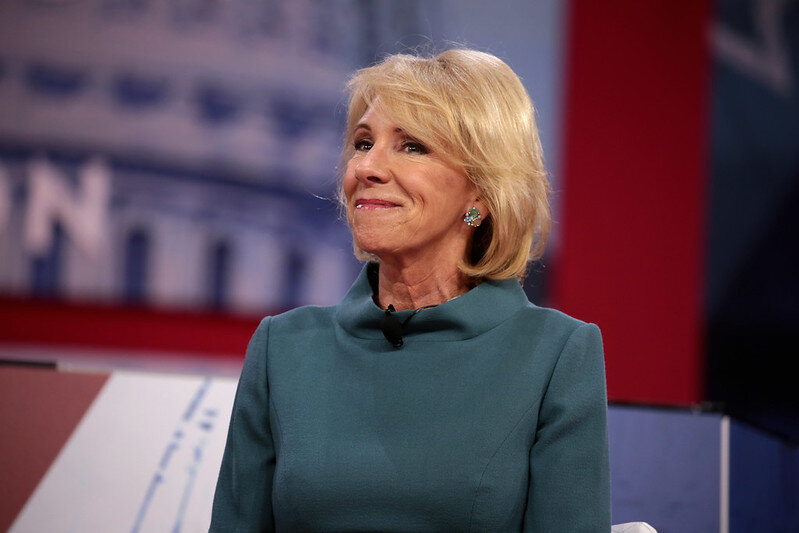 In 1997 Michael Kinsley wrote, “the scandal isn’t the illegal behavior–the scandal is what’s legal.” He was referring to allegations about fund-raising corruption in the Clinton Administration but he might have been writing about Lakewood Public Schools, at least under the federal oversight of Trump’s Education Secretary, Betsy DeVos.

Why? (And why do I write about Lakewood so much?) Because this Ocean County district is an emblem of how inequity permeates New Jersey’s educational infrastructure by privileging certain groups of students over others. Sometimes that privilege is embodied in the excessive power that union leaders wield over the Governor’s Office and the state Department of Education that leads to a “pause” in charter school expansion and meaningless teacher evaluations. Sometimes that privilege is embodied in the way an “integrated” school — Montclair, for example — internally segregates Black and Brown students into lower-level classes. Sometimes that privilege is embodied in the digital divide: A new report from CRPE says “a disproportionate share of those who lack access to a reliable internet connection and devices are Black, Hispanic, live in rural areas, or come from low-income households.” Accordingly, Senator Teresa Ruiz excoriated NJ Education Commissioner Lamont Repollet because “100K families [without access to the Internet and technology] is unacceptable.”

And sometimes that privilege is embodied in how a district —a state, a nation—allocates school funding.

It has been widely reported that Lakewood Public Schools (LPS) is receiving the lion’s share of federal money allocated to New Jersey school districts through the emergency relief fund called Elementary and Secondary School Education Relief Fund (ESSER Fund), part of the federal stimulus bill called the CARES Act. Betsy DeVos, known for her belief that prayer belongs in schools –before her confirmation she said her desire was “to continue to advance God’s kingdom” —  has mandated that the money be shared with private and religious schools, regardless of family income or whether schools adhere to state standards. So Lakewood, with the largest number of NJ students (about 37,000) attending private ultra-Orthodox Jewish day schools, is getting more money than almost any other district even though its public enrollment is only about 6,700 students who are almost entirely low-income and Latino.

Some would argue that the 6,700 students who attend LPS are just a fraction of Lakewood’s 37,000 students who attend private schools (in this case, ultra-Orthodox Jewish day schools) so the district deserves that much money. After all, DeVos doesn’t care about secular course content (she’s advancing God’s kingdom, plus she’s all about local control) and so the fact that boys in Lakewood yeshivas get 90 minutes a day of secular education isn’t relevant, nor is the fact that these schools don’t actually meet New Jersey’s definition of schools. (From the statute: Instruction must “be equivalent to that provided in the public schools for children of similar grades.”)

But is it fair that the low-income Black and Brown kids in Lakewood get less than other poor kids of color in New Jersey?

Let’s look at an equally poor district, Camden City, with slightly higher enrollment, about 8,000. (Public charter and renaissance schools aren’t included in this enrollment figures because they have their own ESSERS allocation. For a list of how much each NJ district and charter/renaissance gets, see here.) Camden district schools receive $12.5 million, proportional  to Lakewood’s slightly lower enrollment.

But the inequity isn’t revealed until we dive deeper. So let’s do the math.

This stark disparity is because CARES money is a zero-sum game. DeVos’ insistence (despite the opinion of legal experts) that states include private schools regardless of family income literally takes money out of Lakewood’s overwhelming poor and underserved population and hands it over to yeshivas.

Lakewood didn’t waste any time with the hand-out. The state posted allocations on May 11th. On May 20th Lakewood held a “Non-Public Consultation Meeting” (see here for the slidedeck) to explain how yeshivas could use the CARES federal grant money, as well as other funding streams.

Other disbursements show up in School Board agendas. Here’s one example:

Letter was sent to the Executive County Superintendent Kevin Ahearn on May 27, 2020 notifying him of the District’s intent to enter into an Emergency Rental Agreement for Tents/Chairs/Tables, as many Nonpublic Schools have expressed an interest in utilizing a portion of their designated CARES Act funds to maintain the operation of their Schools and provide continuity of education services (1) during the months of June, July and August, which is an allowable expense under the CARES Act…The amount of the emergency contract is estimated to be $800,000.

Meanwhile, proficiency trends at Lakewood High School, according to the DOE data, show that only one out of three students meet expectations in reading and zero do in math. Sixteen months after graduation, 7.8% of Lakewood High School graduates are enrolled in a four-year college.

But let’s send the money to yeshivas, even though “in reality, we all know the truth, that in our primary Torah schools for boys [before Bar Mitzvah] they studied at most an hour and a half, and in the advanced yeshivas [high schools] there were no secular studies at all, [spending their days] fully sacred unto God [in Judaic studies].”

What Betsy wants, Betsy gets. Those Lakewood public school students? They get bubkes. The scandal is that it’s legal. NJEducationAid: NJ Policy Perspective's Biased Research Is Misleading You About