LILLEY: NJ Is Tops Because of High Education Spending That Benefits NJEA, Not Students 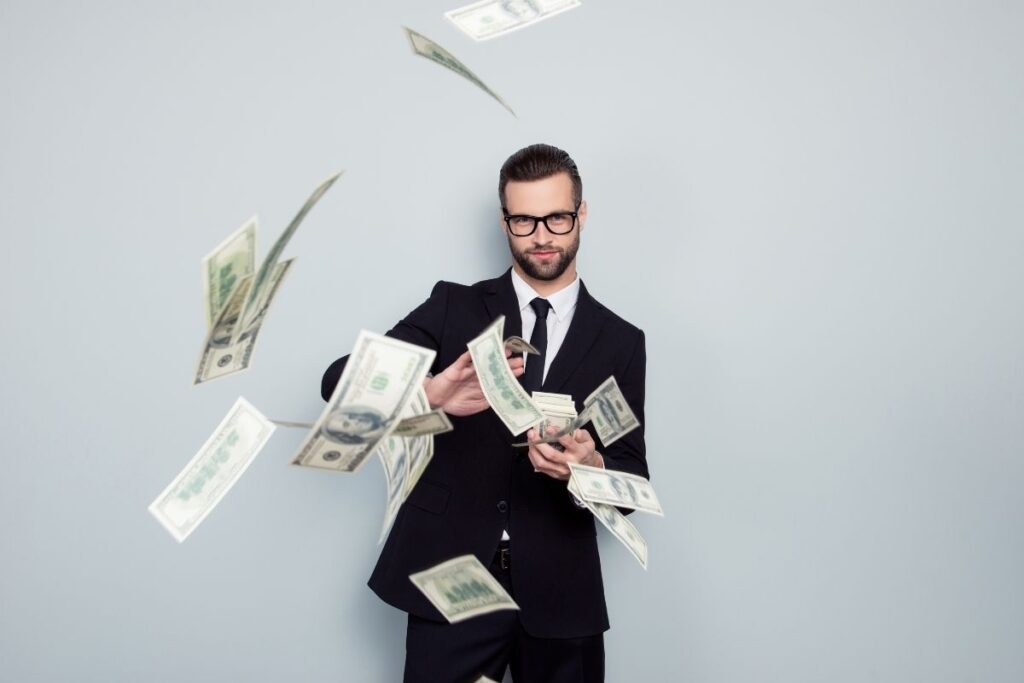 FLORIDA GETS BETTER RESULTS AT LESS THAN HALF THE PRICE

According to Governor Murphy, New Jersey public schools got the gold medal in the “gold standard” of surveys.  Plenty of reason for Murphy’s staunch ally, the New Jersey Education Association (NJEA), to bask in the golden glow as well: a prominent NJEA banner ad on NJ Spotlight’s website declared “NJ Public Schools Rank Best in the Nation … Two Years Running.”

But it turns out that Education Week’s survey is the “gold” standard only if you are measuring how much “gold” – that is, money – a state spends on education.

As set out by Stan Liebowitz and Matthew Kelly of the Cato Institute, there are three major flaws in Education Week’s methodology. First, Education Week included in its calculations factors that are not directly related to K-12 student learning, such as employment as adults, graduation rates and pre-K enrollment. Employment as adults depends on many factors, many of which do not relate to K-12 education. Graduation rates tell us little about what K-12 students have actually learned (38 states do not have graduation proficiency exams). Pre-K enrollment may (or may not) help set the stage for K-12 learning but clearly is not a measure of it.

A second flaw is that Education Week aggregates all students together, regardless of demographic or socio-economic differences.  This has the effect of penalizing states that educate more minority students because those groups tend to perform worse on standardized tests that measure K-12 student learning.

Finally, and most significantly, Education Week deems that more education spending is better. Period.  Student leaning is of course the most important measure for a school system, but all things being equal, a school system that produces strong learning for less money should be seen as superior.  Surely taxpaying parents and citizens would see it that way.  But that is not how Education Week ranks the states.

By valuing education spending as a strong positive factor per se, Education Week has created a bias whereby the highest rated state education systems tend to be in big-spending, unionized states in the northeast like New Jersey, Massachusetts, Connecticut, Maryland and New York. As can be seen in the quotes above, this sits very well with teachers’ unions, like the NJEA, and with their political beneficiaries, like Governor Murphy.

This major flaw in Education Week’s methodology becomes abundantly clear in the case of New Jersey, which supplanted Massachusetts for the top ranking for the second year in a row.  But as Education Week makes clear: “New Jersey retains its crown as the top-ranked state largely due to its continued strength in school finance.” In other words, New Jersey spends more than any other state on public education except one (Wyoming) and this is what propelled New Jersey to the top.  In fact, New Jersey’s unseating Massachusetts was entirely due to more education spending, where Massachusetts ranked 12th.

As can be seen in Figure 1, Massachusetts outperformed New Jersey in the two categories that measure the quality of the education provided to students: Chance for Success and K-12 Achievement.  It was only in the amount of spending that New Jersey greatly exceeded Massachusetts.  Education Week’s formula suits high-spending New Jersey very well. 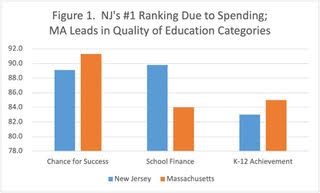 The Cato study makes three major changes to Education Week’s methodology.  First, the Cato study based its ratings of student performance on the National Assessment of Educational Progress (NAEP – which is also used by Education Week’s study), and removed factors that did not measure student performance or teaching effectiveness, such as spending, adult employment, graduation rates and pre-K enrollment.

Second, the Cato study disaggregated student performance data so that states with high minority populations are not penalized because those groups tend to perform worse on standardized tests like NAEP.

Taking NAEP scores and comparing like-students to like-students, the Cato study arrives at a “Quality” score.  As can be seen in Table 1, and as might be expected, both Massachusetts and New Jersey do very well in terms of quality, ranking second and fourth, respectively.  But notice how lower-spending states like Virginia, Florida, Texas and Georgia make it into the top ten when the rankings are based solely on disaggregated, K-12 student performance. 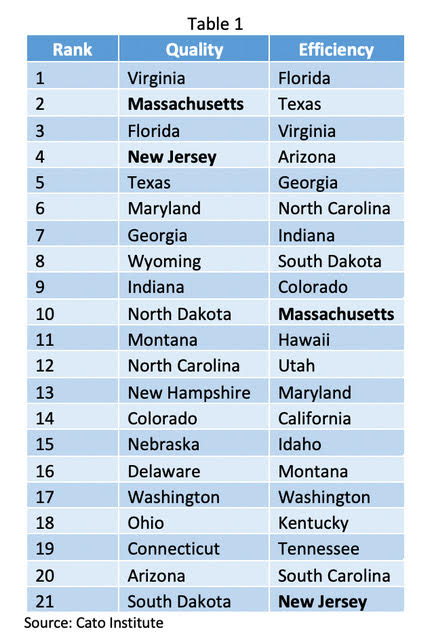 The third major change is that the Cato study evaluates education spending in an entirely different way.  The Cato study uses spending to measure a state’s “bang for the education buck” rather than as a per se positive factor.  It calculates an “Efficiency” rating by dividing each state’s Quality measure by per-pupil expenditures.  As shown in Table 1, a very high-spending state like New Jersey drops to 21st in Efficiency because New Jersey spends 59 percent more per pupil than the average state.

Particularly striking is the comparison between Florida and New Jersey.  In the Cato study, Florida ranked third in Quality while New Jersey ranked fourth.  But here’s the kicker for New Jersey taxpaying parents and citizens: third-place Florida spent $9,346 per student versus $20,021 for fourth-place New Jersey.

Florida got better student results for less than half the price.

The Cato study shows that states with strong teachers’ unions tend to spend more on education but that does not guarantee higher student achievement and usually leads to worse efficiency (New York is a prime example). Notably, Cato’s top five states in Efficiency – Florida, Texas, Virginia, Arizona and Georgia – are all “right-to-work” states, where teachers are not forced to join unions and where unions are correspondingly weaker.  Only one state in Education Week’s top ten states was ranked in Cato’s top ten for Efficiency: Massachusetts came in 10th.

This conclusion about spending is borne out by the Cato study’s rigorous statistical analyses, which find that higher spending does not result in better student performance.  The authors found “no clear relationship between spending more on education and achieving better outcomes.” In other words, most states have achieved a sufficient level of spending, and spending above sufficient levels – such as in New Jersey – “does not appear related to achievement …”  The data says that New Jersey is spending more than it needs to.

Even worse for the strong-union states, the Cato study came to the striking conclusion that, controlling for student heterogeneity, “union strength has a powerful negative effect on student performance.” Cato’s statistical results speak for them themselves: strong unions – like the NJEA –  actually hurt student performance.

CONCLUSION: Education Week Rankings Become a Political Tool in the Service of the NJEA

Cato’s conclusions undercut the narrative the NJEA wants New Jersey parents, citizens and taxpayers to believe.  As correctly anticipated by the authors, by loudly trumpeting the results of the Education Week study, the NJEA – and their political beneficiary, Governor Murphy – are supporting the narrative that high taxes and high education spending are “the recipe for an efficient and smoothly functioning education system.” Their overarching message for New Jersey is: pay up if you want to keep our public schools the best in the nation.

The Education Week rankings are thus transformed to become another part of the NJEA’s broad and unrelenting pressure campaign on voters and lawmakers to spend more on education, aided by the NJEA’s political megaphones like Governor Murphy.  More money means more jobs, higher salaries, top-shelf benefits and pensions, and most importantly, more dues-paying members.

The end-result is that New Jersey gets very good schools for an excessively high price.  As the Cato study showed, New Jersey’s excess spending benefits the NJEA more than it does students.  The NJEA wants to justify the spending by cloaking its self-interest in student success, but thanks to the Cato study, Florida exposes the naked truth: students can perform better at less than half the price.

The inescapable conclusion: New Jersey’s high levels of education spending reflect not so much what is required for a quality public education system, but rather the political dominance of the NJEA. With Repollet Gone, Murphy Fesses Up to the Vastness of