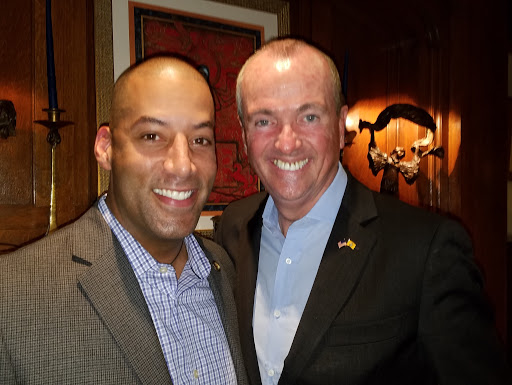 Two days ago a news bulletin appeared on the website of New Jersey Education Association: Marie Blistan, current president, is not running for re-election and Sean Spiller, current vice-president and Mayor of Montclair, will be on the April ballot. He will win because he’s running unopposed.

Montclair Local was the first to report on the story, noting that late yesterday voicemails and emails to Spiller went unanswered. Also, “Spiller also hadn’t yet addressed the new role on in any public posts on his Facebook or Twitter accounts, which focus on his activities and statements as mayor. A ‘SpillerForNJEA’ Twitter account hasn’t been updated since February.”

NJ Education Report has chronicled Montclair Mayor Sean Spiller’s swift rise in NJ’s political sphere through his  dual roles as town and union leader. As he prepares to take the helm of NJ’s teachers union, let’s look back at some recent history.

In 2016, while Secretary-Treasurer of NJEA, Spiller also served on Montclair’s Board of Estimates, a five-member body that oversees the school district’s budget. A non-profit called Montclair Kids First sued Spiller, arguing that simultaneous service to the union and the district was an “ethical conflict” that is “palpable and does a great disservice to all the public school students in Montclair.” Judge Thomas Moore of Essex County Superior Court agreed, ruling, “the dual service to the NJEA and to the people of Montclair…creates an undeniable potential for conflict.”  Spiller resigned from the Board of Estimates.

Last year Spiller ran for the position of Montclair Mayor. (He was elected a councilman in 2012). During the mayoral election, NJ Ed Report guest contributor Mike Lilley released a report called “COUNCILMAN SPILLER, MAYOR SPILLER, GOVERNOR SPILLER: NJEA Members Run for Office,” who posits that Sean Spiller’s campaign for mayor constitutes a “massive conflict of interest” because Montclair is one of the few NJ school districts (11 out of 584) where the mayor appoints the school board. While school boards are supposed to represent “its citizens’ interests in collective bargaining and developing the school budget,” argues Lilley, NJEA Vice President Spiller has a fiduciary allegiance not to Montclair’s citizens but to the union.

Lilley also describes NJEA’s “Political Leadership Academy,” which trains and supports union members who want to run for office. It’s the most famous graduate? Sean Spiller.   As Director of Government Relations Ginger Schnitzer affirmed: “We need NJEA members running for office at all levels of leadership. And who knows? An NJEA member sitting on a school board today, may one day become our governor.”

Spiller won the Montclair mayoral election last May by 195 votes, a 2% margin.

Politico’s Matt Friedman had the same thesis as Lilley, reporting last November that  Montclair Mayor/NJEA Vice President Spiller was headlining a “Holiday Cocktail Reception” to benefit a new dark money group called “Progress for Action.” Dining options for those willing to pay $1,000 a seat included a “Caviar Station consisting of a Variety of Iced Vodkas, Imported and Domestic Caviar Served with Chopped Egg, Onion and Capers.” (This was during a pandemic peak when everyone was supposed to stay home and restaurants were closed except for take-out.)

Friedman writes, “Spiller may be eying a gubernatorial run in 2025.”

A month later Carly Sitrin, also at Politico, reported that Spiller, according to six sources, had “given the state’s congressional delegation a heads up that he’s interested in the position of U.S. Secretary of Education under a Joe Biden administration.”

From NJ councilman to the White House; not too shabby!

Meanwhile in Montclair, the district and the Montclair Education Association (the local arm of NJEA) announced an agreement on a long-running dispute during which the district sued the union for refusing to teach in-person and conducting an “illegal strike.” The settlement is that if union representatives are satisfied with classroom safety during a walk-through, schools will reopen for K-5th graders on April 12th. There is no date for the opening of the middle and high school.

During Montclair’s year of remote instruction, 459 students, or 7% of total students, have disenrolled from the district.

Finally, the president of the Montclair Education Association, Petal Robinson, is running for NJEA Secretary-Treasurer. Unlike Spiller, she has two opponents. There is no contest for NJEA Veep.

Spiller’s success leads to a question: Isn’t the state union president position a full-time gig? It’s sure paid like one: NJEA’s most recent IRS 990 form (for 2017) has the president who preceded Blistan, Wendell Steinhauer, at a salary of $381,075 and Blistan has been making well over $400,000 (not including benefits and deferred compensation.) Does Spiller retain his mayorship once he becomes president?

How ELC is Like the NRA (Hold Your Fire!)