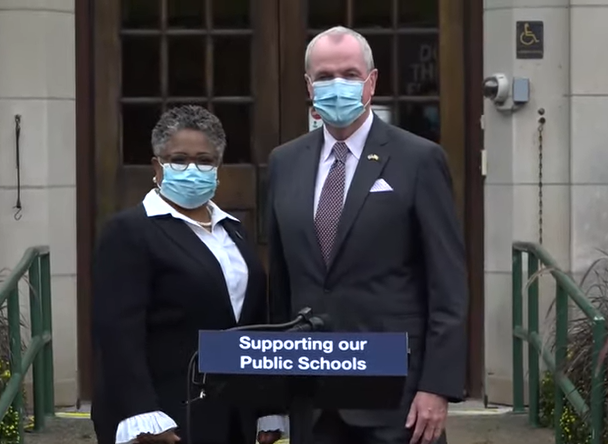 Today Dale Chu considers the “well-intentioned offer from the federal government” to give states greater flexibility in mandatory state standardized tests in order to allow for interruptions in learning and other pandemic-related instructional problems over the last year. Chu says the Biden Administration’s initial “hard line” on the critical need to measure student learning loss has “quickly morphed into complaints that the waiver process lacks transparency and will allow states to back away from the equity guardrails provided by statewide exam.”

“Finally, last week’s approval of New Jersey’s plan to use a newly developed diagnostic tool, called “Start Strong,” instead of the state assessments, barely registered above the din in D.C. But the decision was a pleasant surprise to the state’s teachers union, among other groups, that celebrated their second consecutive bye from state testing. With a wink and a nod, the feds lent its imprimatur to a forty-five to sixty minute “dipstick” administered in the fall as a substitute for the full battery of state exams, even though state officials have gone on record saying that Start Strong is not designed to replace statewide testing.

Having been given an inch, some states and districts across the country are evidently in the process of taking a mile. What’s become clear through this waiver process is that there is little rhyme or reason to how the department is rendering its verdicts. Their regrettable inconsistency means there won’t be any good national data to be had from this calamity, and whether states will have usable data of their own is up in the air, too. It’s all a significant blow to results-based accountability, flying in the face of the civil rights protections enshrined in federal law. The uneven patchwork now before us was an avoidable if not altogether unsurprising outcome.”

Teacher union leaders may indeed be “pleasantly surprised” by D.C.’s wavier but New Jersey Senator Teresa Ruiz, chair of the state Senate’s Education Committee, agrees with Chu’s assessment. During a legistative hearing in September state Education Department officials conceded that Start Strong tests “should only be used with other supporting evidence (assignments, homework, etc.) when drawing conclusions about a student’s overall academic performance.” Ruiz weighed in, noting that the tests “will not give educators an overall picture of how New Jersey students are doing or help guide new policies.”

She added, “it is unfair for the state Department of Education to tout New Jersey’s recent No. 1 ranking by Education Week as the best state in the nation for public education when some districts are doing far better academically than others.” And, “I’m asking for a diagnostic tool that checks in academically to see where our students are, that we can break down by zip code, that we can break down by race, ethnicity and gender.”

If we don’t have baseline data to show to us what is it that we need to do, we will be perpetuating a fraud of being No. 1 in the country. And that has got to stop.

Some fear that the NJ Department of Education is, in fact, aiming to permanently replace the state standardized tests, fully aligned with course content standards, with the Start Strong “dipstick” tests. That would indeed, as Chu says, be “a significant blow to results-based accountability, flying in the face of the civil rights protections enshrined in federal law.”

QOD: How Do Teachers and the Public Disagree About Teacher Newark Union President Says Newark Parents Are Too Ignorant to Two Tales of One City: Roger León’s Phoniness vs. Newark