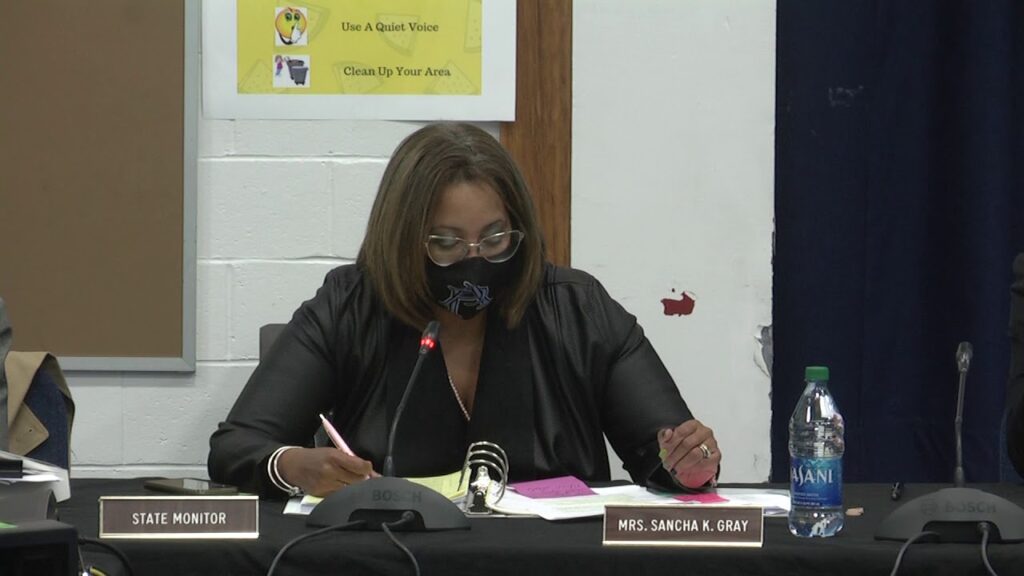 Next Monday, May 24th, the Asbury Park Board of Education will interview candidates to replace out-going Superintendent Sancha Gray. Numerous sources have contacted me to say the fix is in and the interviews on Monday are, in fact, a cover-up for a predetermined result.

So let’s explore the School Board’s “process” for choosing an interim superintendent who, from what people are saying, will end up as Asbury Park’s permanent superintendent.

When Gray announced her intention to resign on March 26th, four internal candidates–those already employed by the district and with the proper certifications–submitted their applications to the School Board. These four are Kristie Howard, Director of Student Services; Mark Gerbino, Director of Athletics; Kathy Baumgardner, Principal of Asbury Park High School; and Rashawn Adams, Director of Planning, Research & Assessment.

Ordinarily a school board will, as a courtesy, interview all internal candidates.  But that’s not what the Asbury Park School Board is doing on Monday. Instead, they will only interview Rashawn Adams and one outside candidate, Michael Rossi, recently of Sparta Public Schools.

For evidence of the pantomime that will occur Monday, let’s look at Michael Rossi, Adams’ competition for the top slot in the district.

According to news reports, Rossi became the superintendent of Sparta in 2016. In October 2019, the Sparta School Board approved a new contract for Rossi, even though he still had eight months left on his old contract. The approval vote was 5-3 with one abstention, which is peculiar because boards like to approve superintendents unanimously to show the community they’re one team. One reason for the close vote was that the five board members who voted in favor did not include the other board members in renewal discussions, which led to an ethics complaint. The new contract raised Rossi’s pay from $167,500 to $192,000, plus merit bonuses, plus $738 for every sick day. In the final year of the contract, 2024, his salary would come to $231,935.

Except eight months later, the Board unanimously voted to fire him (technically, “separate” from him) with a severance pay-out of $171,360. The details remain murky but on the state rubric called QSAC (Quality Single Accountability Continuum) which every school board must fill out every three years to assure compliance with regulations, Rossi allegedly falsified information: he said the district curricula had been updated to required specifications when, actually, it hadn’t. In fact, the district had been out of compliance for at least three years in Social Studies, World Language, Health and Physical Education, Visual and Performing Arts, Technology and 21st Century Life and Careers.

When confronted by the Sparta School Board at a meeting, Rossi said he didn’t have time to do the updates. One Board member said, “We have had a number of issues over the past years. This is directly related to Dr. Rossi.” A resident said, “The hallmark of being a leader is you are held accountable for what you say and do.”

Question: Why is the Asbury Park School Board interviewing Rossi for its superintendent?

Answer: To cement their selection of Rashawn Adams.

Question: Why would the Asbury Park School Board members choose Rashawn Adams as its superintendent (who has his own murky history–more on that below)?

In fact, according to sources, Repollet made phone calls to two board members, Joe Grillo and Angela Ahbez-Anderson, to urge them to choose Adams.  One staff member told me Adams is Repollet’s “frat bro.” Another said, “Repollet is involved behind the scenes in everything that happens here…He’s directing the [superintendent] negotiations.” Another said, “with a couple of exceptions, the Board is completely loyal to Repollet.” Another said, “the district is an employment agency” and even Carole Morris, the state monitor, said Adams “isn’t superintendent material.”

Yet Adams it will be.

Let’s look at him more closely.

Adams and Repollet’s history goes back more than 20 years. According to these Irvington School Board minutes, both served as assistant principals there. Also they are both members of the same fraternity, Omega Psi Phi. [Correction: Adams and Repollet belong to separate fraternities.]

After Irvington, Adams served in both Newark Public Schools and Trenton Public Schools. (In 2006 the Trenton School Board did not renew his contract, which it can do for all non-tenured employees. Adams filed an appeal, which was not granted.)

Then Adams went to Franklin Public Schools District where he served as Principal of Franklin Middle School. During his time there he was a defendant in a lawsuit pressed by a special education teacher who said she was not renewed because she had breast cancer and had to take time off for surgery and chemotherapy. The complaint said, “Defendants’ conduct was willful, malicious and/or especially egregious and done with the knowledge and/or participation of upper level management.”  In 2015 Adams resigned.

By then Repollet was a year into his job as chief of Asbury Park Public Schools. Adams came on as principal of Asbury Park Middle School in June 2015 and Repollet promoted him in 2017 to the Central Office position of “Director of Planning, Research & Assessment” (an odd position for a district with 1,700 students).

In 2016, a year after his appointment as principal, a female staff member (I’m not going to use any names here) filed a formal grievance against Adams for a “hostile workplace” due to “gender.” She said the hostility began in June 2016 with the latest episode January 2017, which was when she filed the “Discrimination/Harassment Complaint Form.” In brief, Adams accused her of plagiarism and generally “bullied” and “intimidated” her on several occasions. His accusation of plagiarism was, she said, “deceitful and erroneous.” She described his behavior as “erratic,” “unpredictable,” and “of a dubious nature.” He told the staff he “had just returned from ‘planet asshole’” and she felt “maliciously targeted.” Eight other staff members signed the complaint as witnesses to the “alleged incidents.”

This is the candidate whom the Asbury Park School Board will choose on Monday.

Teachers and other employees are so concerned that the Asbury Park Education Association put out a survey over the weekend asking their members to rate the four candidates–Adams, Baumgartner, Gerbino, Howard.

Other questions sources have asked me: Why is the State Monitor, Carole Morris, condoning this charade? Why is the New Jersey Department of Education not stepping up its oversight when the children of Asbury Park, despite enormous sums of state aid, remain largely illiterate? Why isn’t anyone paying attention to Reginald Mirthil, principal of Asbury Park’s Thurgood Marshall Elementary School, who yesterday wrote a letter (see here) itemizing a litany of abuses from Central Office staff (whom he refers to as a “gang” and a “criminal syndicate”), including lack of an instructional plan, lack of strategic planning, blatant nepotism, and disregard for the needs of the students they serve? (After NJ Education Report posted Mirthil’s letter, three staff members called to tell me they agreed with everything he said.)

Yet the overriding questions are these: Why does Lamont Repollet, from his perch at Kean University with an annual salary of $365,000 per year, feel compelled to control Asbury Park’s district leadership? And why did Gov. Phil Murphy select Repollet as his Education Commissioner?

More on that to come too. Christie and the NJEA: One Step Forward, Two Steps Back