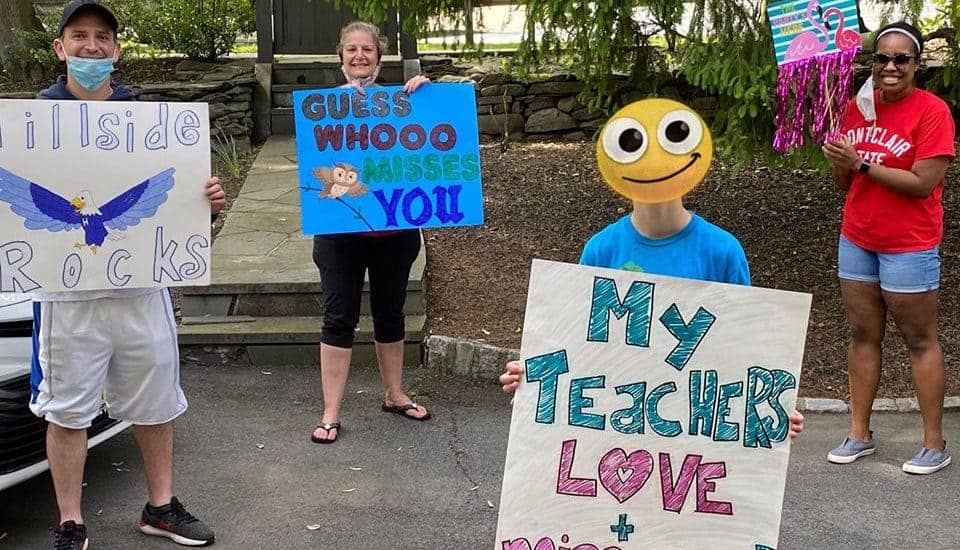 The Monclair Board of Education announced last week that, due to budget issues, it was cutting 36 positions. In response, the Montclair Education Association (MEA) issued this statement claiming that the cuts were “draconian,” “significantly damaging,” and “long-lasting.”  Petal Robinson, president of MEA, is the new Secretary-Treasurer of the New Jersey Education Association, the state teachers union. The mayor of Montclair, Sean Spiller, is the new NJEA President.

On May 14, thirty-six staff members received notification that their contracts with the Montclair Public Schools were not being renewed. The district has only offered ‘budget deficits’ as the rationale for these draconian cuts. However, the Montclair Public Schools are not in a financial deficit. The district has more than enough money coming in from tax revenues and federal grant monies to sustain its staffing and maintain programming. The cuffing of thirty-six staff positions is because of a decision, not a deficit.

The effects of this decision will prove to be significantly damaging and long-lasting. The district has chosen to terminate the contracts of our special education-related service providers and aides, as well as related arts teachers, general education teachers and building staff. ‘There seems to be no rhyme or reason,’ said MEA President Petal Robertson, ‘as the district has called for reductions in areas in which they have very few if any other certified staff to work within. Throughout this school year alone we have posted job searches for paraprofessionals, secretaries, and teachers, yet all of those positions are slated to be reduced. In fact, one of the positions took us years to find someone certified to work within, and we are cuffing them. It just doesn’t make sense and is definitely not a sound academic plan for next year.

Additionally, the cuts will impact our students with disabilities, since several special education staff, related service providers, and educational support staff have not been renewed to work next school year. Looking at the numbers, the district is also set to lose several math educators and a significant amount of visual art teachers. The consequences of these cuts will include limited support for our special education population, crowded classes for our students (physical education classes are already at approximately 40 students per class), a diminished visual arts program, and for all of our students—but especially those of color—a lack of representation in their schools, as a significant amount of those cuts are people of color.

In a meeting with the association, [Superintendent Jonathan Ponds] acknowledged that the district wanted the option to recall those laid-off in the summer or afterward, if the district finds that they need them. This tactic is irresponsible. Not only does this put undue pressure and stress on these staff members during already difficult times, it’s also a disservice to our students. For the sheer purpose of self-preservation and protection for their families, those cut will seek employment elsewhere. This means that highly qualified staff who are familiar with our students’ needs will no longer be available for rehire. The district will also be left as short-staffed as we were this school year, as we began with over two dozen openings, many of which are still being covered by substitutes. When questioned about the excessive amount of support personnel being cut, Dr. Ponds suggested that special education students need to become more independent and not rely so heavily upon a 1:1 paraprofessional, hence his reasoning for eliminating the position. Our special education services are not about building dependency; rather, our services ensure students learn valuable techniques and strategies to be successful now and in the future. Additionally, a student’s educational plan is not a decision of the superintendent, but one made with the student’s teachers, parents, related services team, and child study team.

Equally as alarming is the faulty way in which the entire process was handled. No staff member was notified in advance by anyone, instead they received an email late on a Friday afternoon. ‘To my knowledge, no staff member received a RICE notification which is their legal right when their employment is to be discussed by the board in any capacity,’ said Robertson. ‘The district also violated our negotiated agreement by not following the staff reduction guidelines. The list even contained a retiree which leads me to believe that there was no thoughtful review conducted.

Furthermore, after extensive analysis of the school district’s budget by school finance professionals, we can say assuredly that the money coming in from tax revenues and federal aid is over and above what the school district is suggesting as a deficit. For example, tax revenues will be roughly $3 million dollars. With retirements and resignations, as well as funds from the American Rescue Plan funds which can be earmarked for salaries, the district’s revenue will come in at the $6 million dollar mark. So, this is clearly not a revenue issue, this is a spending issue. Montclair Public Schools are not in a deficit. The district leadership is making decisions about how to spend district dollars that do not prioritize their students or their staff members. They cannot claim a budget crisis that calls for the discharging of thirty-six staff members while adding positions to central office, paying an additional personnel manager to sit on their negotiations team, and padding an ever-increasing surplus. This is a decision; one that can still be reversed as we set our sights on making sure that the 2021-22 school year is fully staffed and ready to go.

We ask that the leaders of our district make a commitment to keeping our public education strong by retaining our expert teachers and staff members, and by being transparent and clear about the reasons for the staff cuts. Fishing for Integrity in Lakewood