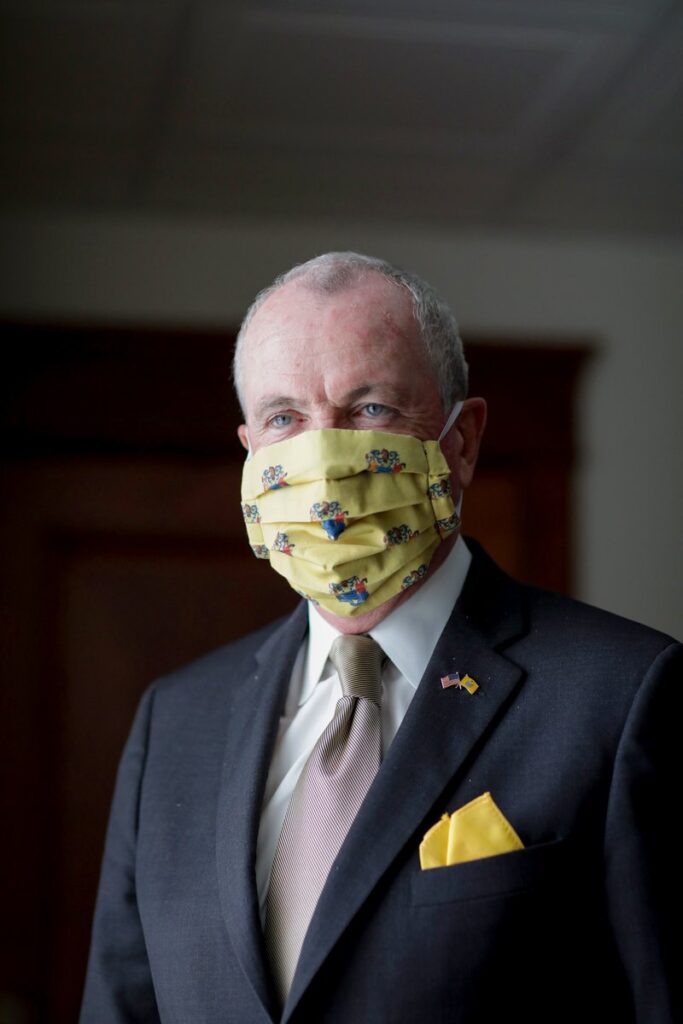 In response, thirty minutes ago Murphy released new guidance saying that “our metrics are moving in the wrong direction and new data suggests the Delta variant is more transmissable even among vaccinated individuals, which is why we are making this strong recommendation.” 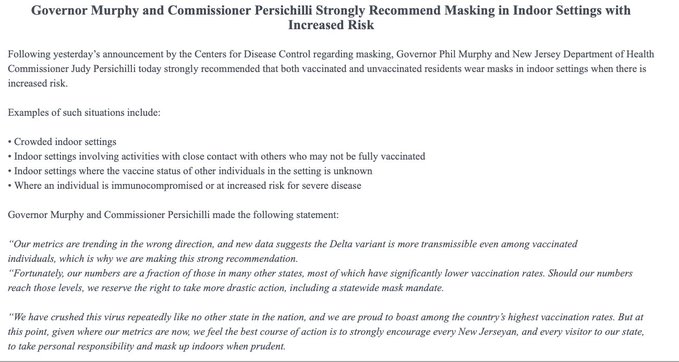 Also just now, the New Jersey Education Association (NJEA) announced that it wanted all staff and students to wear masks in schools, regardless of vaccination status. “This is a fast developing situation, obviously. But if the CDC guidance says that masking in schools will keep students and staff safer, then schools should follow that guidance,” said Steven Baker, spokesperson for the NJEA.

The problem for Murphy isn’t medical but political.

The CDC guidance is clear: Even people who are fully vaccinated should wear masks in regions that have a “substantial or high transmission” of the virus. This includes schools: “CDC recommends universal indoor masking for all teachers, staff, students, and visitors to schools, regardless of vaccination status.” Right now, only Cumberland and Warren counties have low transmission rates; Monmouth is “high” and 12 other counties are “substantial.”

The political guidance? Not so clear. NJ was one of the last states to lift mask mandates, behind even Pennsylvania and New York. With four months before the election and GOP opponent Jack Ciatarelli an anti-masker, Murphy’s new guidance, science aside, may be unpopular given pandemic exhaustion among state residents.

Last month, hundreds of angry parents demonstrated outside the Statehouse demanding an end to mask-wearing in the final weeks of school as the weather became warmer. Less than a week later, Murphy allowed districts to waive the mask requirement indoors during a heat wave after being resolute that students would have to wear them.

“Any politician is going to be balancing the political implications with the health implications,” said David Redlawsk, chairman of the political science department at the University of Delaware and former director of the Rutgers-Eagleton Poll. “It leaves people unsure of what to do. Last month it was one thing, this month it’s another.”

And now it’s another.

Matt Friedman of Politico weighs in:

“There hasn’t been any public polling on this in New Jersey, but does Murphy really want to reimpose that with the election looming? Especially in the summer, when mask wearing is a lot less comfortable than the winter? And I imagine compliance would be significantly less than before.

“What’s the appetite? Not much, as you can imagine. People have had it with this pandemic,” Murphy told Yahoo! Finance Tuesday, a day after he suggested at a press conference that he was hesitant to reimpose restrictions.

And so the CDC recommendations, once a way for Murphy to justify restrictions, could be a political annoyance.”

Political annoyance or not, the Governor has made a decision. Yet NJEA’s voice (and deep pockets) often control Murphy. His current school guidance–wearing masks is not mandated but up to individual districts–is contrary to NJEA leaders’ wonts. Will he mandate masks in schools? Will parents, then, be less likely to send in their children, knowing that they’ll be wearing masks all day? Does this flip on masks in schools force him to backtrack on his no-virtual-learning-in-September edict, which has already ignited outcry?

These questions have answers. We just don’t know them yet. Asbury Park Teachers Speak Out: ‘I Would Send My Child

New NJ Spotlight Column: How Can We Make Peace with