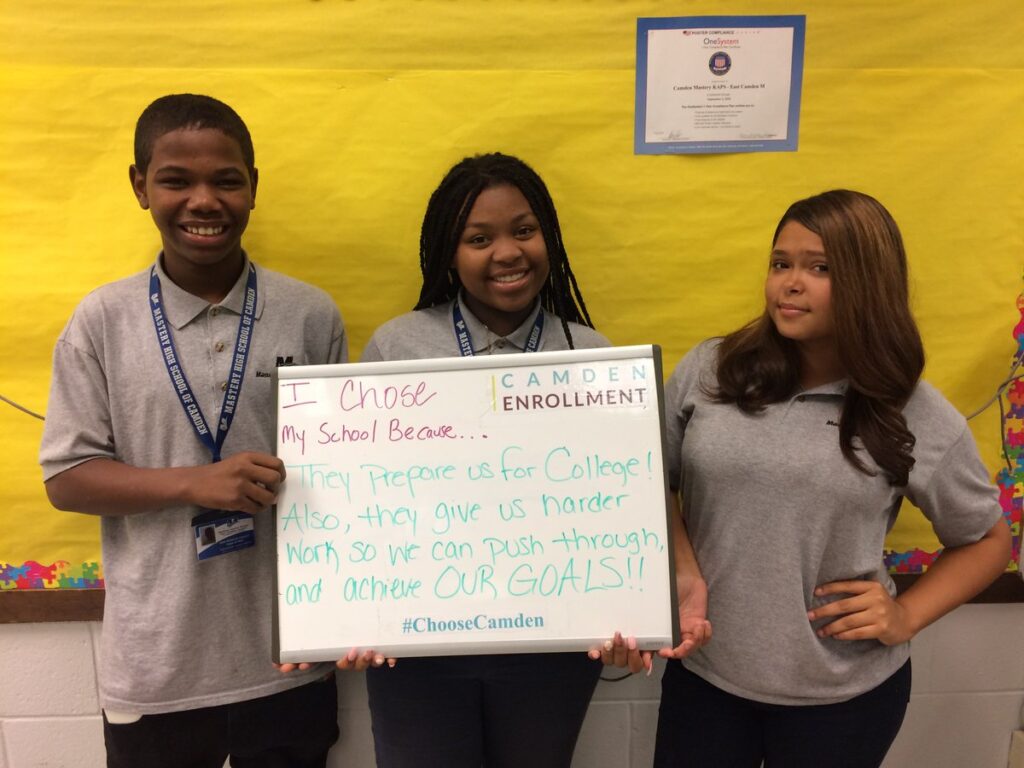 Here’s today’s tweet from Sue Altman, head of the New Jersey Working Families Alliance, as she continues her assault on the expansion of educational options for Camden families. She’s quoting a Camden mother protesting an empty district school’s sale to a public renaissance school that’s popular with parents, and asking why a nearby suburb called Haddonfield doesn’t have these hybrid charter/district schools too.

“New Jersey is racist. If @mastery_schools or @UncommonSchools are so great why don’t they have them in #Haddonfield?”

This question deserves an answer and her conclusion–New Jersey’s inclusion of renaissance schools in Camden families’ list of options is racist–deserves some discussion But let’s start with the easy one: Why, indeed, does  Haddonfield not offer options like Mastery or Uncommon or KIPP, which operate Camden’s renaissance schools?

Because Haddonfield doesn’t need any other public options. In fact, this juxtaposition of school quality in Camden City and a suburb nine miles away explains why 60% of Camden parents are choosing non-district schools.

Let’s take a look these two neighboring municipalities. In Haddonfield the average household income is $151K and the median home value is $512K. The local school district enrolls 2,712 students and no one is economically-disadvantaged. Ninety-eight percent of students graduate high school and 95% go to college. Almost all students are white and Asian. The district high school meets every target for college and career-readiness.

In Camden the average household income is $27K and the median home value is $84K. Camden City Schools district enrolls 6,000 students (used to be 15,000 but parents chose the option Sue Altman wants to erase) and many are economically-disadvantaged. (State database is glitchy on this field.) Fifty-nine percent of students graduate Camden City High School and 32% go to college. Almost all students are Black and Hispanic. The district high school does not meet a single target for college and career-readiness.

And that’s why Camden families have access to a robust alternative public sector of charter and renaissance schools.

Is this racist? Seems to me more like a response to racism, not a cause. In fact, what’s “racist” is that New Jersey has two separate and unequal school systems. If you can afford the mortgage in Haddonfield (or any of our other wealthy and mostly White/Asian suburbs) your kids go to high-quality schools. If you can’t, you end up in a district like  Camden. No amount of Abbott cash will affect those inequities; we’ve tried for 35 years with no noticeable impact.  Adequate funding is necessary but not sufficient.

And that’s what Altman gets wrong. The educational racism in New Jersey has nothing to do with alternative public schools in Camden. Instead, our racism is structural, distinct from the Urban Hope Act, a target of Altman’s twitter rage. This 2012 bill created a mechanism to bypass the structure that links school quality with family income, permitting three cities to approve high-achieving charter networks to operate public schools run by both the charter and the district. That’s what happened in Camden. Nothing’s perfect but the  Act’s goal is being realized. Also these schools are neither “dumb” nor “cookie-cutter.” (Here are some parent comments. Here is a rundown of student outcomes in district, charter, and renaissance sectors. All schools rise.)

So why is Sue Altman tweeting out this protest (which, from what I can tell, included the mom, Altman, and Keith Benson, the nutty head of the Camden Education Association)? Why does Altman, who heads an organization that says it’s “taking back the Garden State for the 99%,” support a reversion to Camden’s status quo of having the worst schools in NJ?  Also, she must be smart—heck, she went to Columbia University and Oxford–and surely understands what racism is. So why is she targeting the schools in Camden that parents prefer?

Because New Jersey Working Families Alliance (NJFA) is all about protecting adult union jobs  and charter schools, renaissance schools too, don’t have to hire union staff members.  Altman’s (and Benson’s) objection to Camden public school alternatives is about the grown-ups, not the kids. She doesn’t care that every year over the last five years Camden student outcomes have improved. She doesn’t care that parents say, “this is the most hopeful we have ever been about Camden and our children’s future.”

In fact, NJFA’s most recent tax filing shows the extent to which union politics dominates its agenda. The Board of Trustees includes Hetty Rosenstein of CWA, Ginger Gold Schnitzer of NJEA, and other labor lobbyists. Its treasurer is Lizette Delgado-Polanco.

(Name ring a bell? Delanco-Polanco became briefly famous when Phil Murphy appointed her to head the Schools Development Authority. which oversees school construction and renovation, especially in Abbott districts like Camden. Once there she inflated her credentials at an Assembly hearing and “allegedly fired longtime employees and replaced them with about three dozen friends, family and business associates, many of whom were placed in jobs paying more than $100,000 annually and some of whom did not have the required qualifications for the positions.”  Also, her husband was mysteriously hired by the State Department of Education as a communications consultant for $95K a year. His previous experience was as a minor league baseball coach and infielder.)

Altman dropped her twitter storm on Camden once Andrew Cuomo resigned. On to bigger and better things! Camden students are headed for better things too, as long as Altman and her adult concerns don’t take precedence over what children need and parents want.