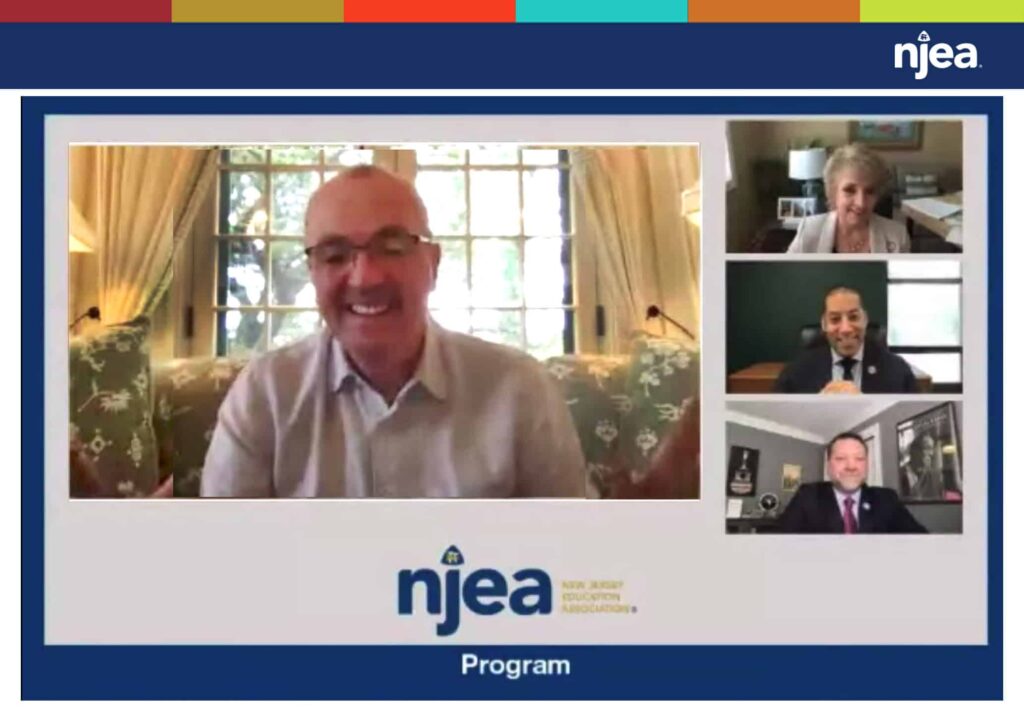 At Tuesday night’s gubernatorial debate between incumbent Phil Murphy and challenger Jack Ciattarelli, those in attendance and those watching remotely repeatedly saw a familiar symbol: the logo for the New Jersey Education Association.

Weird, right? NJEA is a huge Murphy-booster, endorsing him, celebrating him, committing at least $15.5 million in member dues to Murphy’s re-election (according to Mike Lilley), and denigrating his opponent. Also, the state agency that regulates campaign contributions explicitly bans debate sponsors from contributing to a campaign.

So isn’t NJEA’s apparent sponsorship of Tuesday’s event both a conflict of interest and a regulatory violations?

Matt Rooney appears to think so.

Anyone want to explain how the @NJEA – which is spending big money in support of Phil Murphy – is also a sponsor of tonight's debate?

But the head of Save Jersey is super-conservative so maybe NJEA’s presence amounts to a tempest in a teapot. Except the non-partisan Rebovich Institute for NJ Politics shared Rooney’s concerns:

This is a genuinely legitimate question, Matt. There was a competitive process to become a debate sponsor. Yet we saw apparent paid sponsors tonight and at the first debate who were not awarded debate sponsorships by @ELECNJ. No approval, no screening process. Not sure how.

Carly Sitrin of Politico (her article,”NJEA’s Involvement in Gubernatorial Debate Raises Questions,” is sadly behind a paywall) dug deeper. She notes that the state’s Election Law Enforcement Commission (ELEC) explicitly bans debate sponsors from from contributing to a candidate’s campaign and/or endorsing them:

Still, at the close of the livestream of Tuesday’s debate at Rowan University, the NJEA’s logo appeared with the this narration: “Funding for the NJ PBS’s 2021 gubernatorial debate is provided in part by New Jersey Education Association, Fuel Merchants Association of New Jersey and New Jersey REALTORS.”

Sitrin goes to the expert, Micah Rasmussen, who said NJEA may have legally skirted the law, “but when you put their logo on the screen and say they are sponsoring the event, it does raise questions.”

In response, NJEA spokesman Steve Baker said everyone had it all wrong: NJEA was simply cementing its alliance with NJ Spotlight and NJ Public Radio, two of the sponsors of the debate. The logo’s omnipresence had nothing to do with the union’s lobbying efforts for and contributions to Murphy’s re-election campaign.

Sitrin notes that ELEC requires organizations who want to sponsor a debate to fill out an application that asks questions like “Is your organization affiliated with any political party or with any holder of or candidate for public office?” and “Does your organization agree not to make any endorsement in the Gubernatorial Election until the completion of all debate(s) which it may be selected to sponsor?”  Potential sponsors also have to “list sources of financial support to the organization to underwrite costs associated with the debate(s).”

Yet, “according to documents filed with ELEC, the NJEA was not reported as a sponsor or a source of financial assistance for Tuesday’s debate.” That’s because, according to Rasmussen, NJEA claimed its sponsorship was not of Murphy but of NJ PBS and NJ Spotlight, which he considers a form of “circumventing the rigorous vetting process ELEC has in place.”

Our state’s politics are as scuzzy as they come. Still, even the appearance of a powerful union sponsoring the debate for the incumbent who some have called NJEA’s “lapdog” seems a step too far, even for New Jersey. Can we take it down a notch, NJEA and Mr. Governor? KIPP NJ Parent: ‘Now Our Children Will See Themselves as