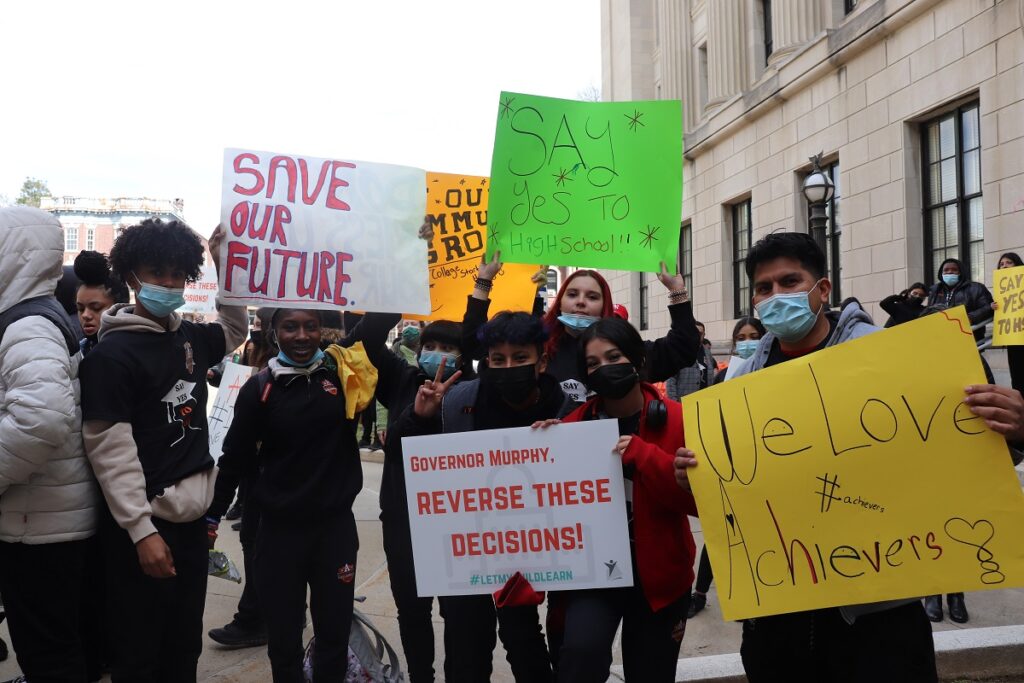 Note: Achievers Early College Prep is one of seven high-performing public charters with previously-approved expansions that the Murphy Administration’s Education Department recently reversed. Currently 90 AECP ninth-graders are educationally-homeless because Murphy’s DOE refused to allow the school to add a tenth-grade despite glowing evaluations and enthusiastic families. School leaders and advocates are currently appealing the decision. For background, see this discussion.

When COVID-19 hit New Jersey in March 2020, Efe Odeleye, the co-director of Achievers Early College Prep Charter School was faced with a moral imperative: in order to best serve the public charter’s students and families–Hispanic, Black, and 82% economically-disadvantaged— her team had to quickly pivot to meet their urgent academic and emotional needs.

Achievers Early, which serves grades 6-9, is located in Trenton, New Jersey’s capital. While a section of the city boasts august buildings like the State Legislature, the Governor’s Office, and multiple wealthy lobbying groups, the rest of Trenton, only 10 miles south of lush Princeton, has the highest poverty rate in the state and one of the highest homicide rates in the country. When Covid-19 arrived, infection rates in the state were the second highest in the country, dwarfed only by New York City. On March 18th, 2020, Governor Phil Murphy closed down all schools and businesses, except for essential services. Trenton Mayor Reed Gusciora set a curfew for all residents (except essential workers) due to rapid COVID spread and rising violence.

What was best for Achievers Early students and families? The answers to that question evolved over time …

At first, Odeleye said, her team decided that they needed to “take it easy” on students, reasoning that everyone was under so much stress that families needed the flexibility of asynchronous learning. They redistributed students’ Chromebooks by setting up tables outside the school building, gave everyone a pick-up appointment to maintain social distancing, and started a light schedule of classes. But staff members quickly realized this abrupt change in routine was “simply more disruption.” What children needed, above all, was a sense of normalcy.

So they pivoted to a “normal” school day to create structure in chaotic times. Every school day at 7:45 am, students logged onto their Chromebooks–cameras on at all times—wearing their Achievers Early tee-shirts. Classes started in earnest, all live synchronous learning with a resumption of the high standards students were accustomed to. Throughout these adjustments, topmost in Odeleye’s mind was “reaching out to families and using hearts and minds to figure out the right balance.”

Parent Rosa Gonzalez, whose son Anthony is a ninth-grader, reflected on the pivot: “The kids were so happy and so were we. We had lots of questions at first—how to log in, how to hand in an assignment, what to do if our kids needed more help understanding something—but the school gave us all the tools we needed.”

Indeed, the balance was better once students were on task for the day. Yet more problems loomed because they needed higher levels of support than they ever had before. What, Odeleye mused, does that look like in a virtual environment?

She and her co-director, Osen Osagie (who is also her sister), looked for what they considered “pain points.” What were the unaddressed needs of students and families? For students with disabilities (17% of their enrollment), it was essential that they receive services mandated in their Individualized Education Plans. What about students who received physical and/or occupational therapies? Achievers Early quickly delivered necessary equipment to each child’s home so that specialists could provide remote therapy sessions. What about English Language Learners (11% of their enrollment)? They resumed appropriate instruction.

Food insecurity was a big issue for Achievers Early families and so boxes of food (for not just students, but their families as well) were available twice a week, one pick-up on Monday to cover two days and another on Wednesday to cover three days.

And then there was attendance, a struggle for schools across the country: McKinsey estimates that one-third of U.S. students were chronically absent during the pandemic. “We needed a more robust team,” Odeleye explained, and so 12 staff members were ready to jump into action by 8:00 am each morning for students who hadn’t logged on, calling and texting parents. “If they know that call is coming, they know we’re not going to back off,” she laughs. “Our attendance rate never dipped below 90%.”

Social-emotional trauma, as Trenton continued to endure one of the highest infection rates in the country and violent crime only briefly ebbed, was a key concern for staff at Achievers Early. In response they started creating cultural celebrations—”tons of them,” Odeleye said, and “we did everything we could so school felt like school, that students had one haven that was ‘normal.’”

Fall 2020 came about and Gov. Murphy gave school districts the option of opening while following strict COVID-preventative measures (social distancing, mask-wearing, hand-washing) or remaining virtual. In November, Achievers Early tried to open but had challenges with its building. (New Jersey doesn’t offer any facilities aid to public charters, unlike traditional schools in Trenton whose building needs are fully paid for by the state.) And so students with disabilities and English Language Learners returned to school with increased staffing levels–all teachers were in person— while other students continued their full days of remote synchronous instruction.

This past September New Jersey administered a statewide student proficiency assessment in math and reading.

That’s because the charter starts in 6th grade and students had only attended the school for three weeks. For instance, 25% of 8th grade Trenton district students reached proficiency in math; at Achievers Early, 43% did. In reading, 17% of Trenton 8th-graders met state expectations; at Achievers Early, 33% did. (See graphs below.)

Looking back, those nimble pivots, ongoing outreach to families, and attention to myriad needs protected students from the sharp learning losses experienced by schools with similar demographics.

“Achievers was able to meet the moment because we had parents, staff, and students who were determined to push forward, despite the obstacles that the pandemic brought on, “ Odeleye explains. “ It was not easy and we were constantly told that we were doing so much more than most schools, but at a time when so many of us resigned to the disruption the pandemic caused, we didn’t see a viable alternative. Doing less was not an option.” 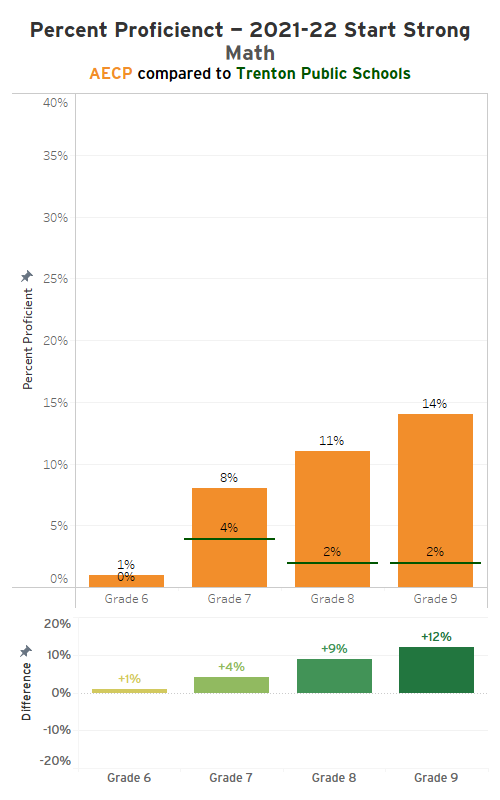 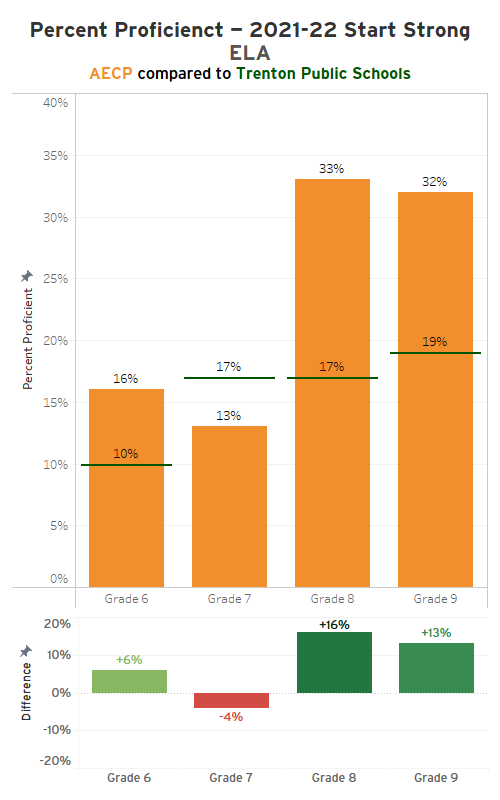 Standardized Testing Opponents are on the Wrong Side of Civil