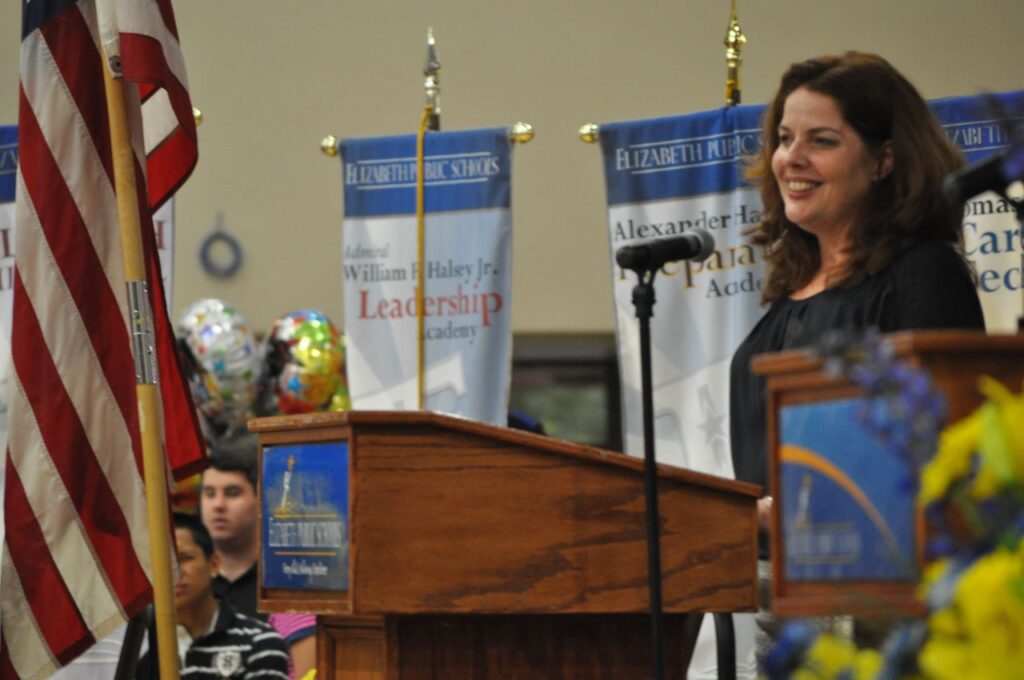 Last night’s Elizabeth Board of Education meeting was raucous and chaotic, coming on the heels of explosive accusations by a former special education teacher.  Yet the public had far more to say about district culture, leadership, and endemic racism, and might have said more except for tightly-enforced speech restrictions.

This is Part One, devoted to charges of racism. On Monday we’ll cover accusations of violating the rights of students with disabilities, as well as concerns from the local teachers union about stalled negotiations. You can watch the whole meeting (if you have five free hours) here.

The meeting began, after a number of ceremonial items, with lengthy remarks by Superintendent Olga Hugelmeyer (minute 47 of video), including criticism of NJ Education Report for publishing remarks by a former district employee who said the district is “committing horrific acts that harm teachers, students, and parents.” Hugelmeyer denied the charges and accused NJ Ed Report of being “funded by black markets” and “dark sources, part of the underground trying to eliminate public education.”  As “superintendent of New Jersey’s second largest district,” she intoned (actually, Elizabeth is NJ’s third largest district), “I won’t allow these lies to stand anymore” because they are cast by “so few with clear political motivations.” All staff members are not only qualified and certified, but outstanding.

Yet the real fireworks happened–gavelling down of speakers, booing of the crowd, corresponding cheers—during the section of the meeting devoted to public comment when community members accused district personnel and Hugelmeyer’s husband of racism.

First a clarification: Elizabeth Public School’s rules for Public Comment, which were duly read by the board attorney, include this: “a speaker should refrain from naming individuals.” According to the American Association of School Administrators, this rule is not constitutional:

Board policies that courts have found unconstitutionally restrictive include prohibitions on ‘improper conduct or remarks’ and ‘personal attacks.’ Turning off the microphone during a public tirade against a school administrator also was found unconstitutional as an act of viewpoint discrimination.’

Elizabeth School Board restricts the speaking of names of personnel and turns off microphones before the allotted three minutes is up. Members should know better and perhaps should refrain from arrogant statements like the one made by the Board attorney: “this is a meeting of the Board, not a meeting of the public.”

So let’s go to a particular public comment when a community member named Kason Little (1:48 in the video), who is Black. came to the microphone wearing (he said) a tee-shirt that said “Black People Are Not Monkeys.” He proceeded to describe an incident involving a district principal whom WPIX identified last week as Yvonne McGovern. According to reports, a student used the “n-word” in reference to other students and staff. McGovern told the child to use the word “monkey” instead. While Hugelmeyer told WPIX she was “outraged” and the district would address this immediately, she just transferred McGovern to a different school.

When Little called out McGovern by name (which, according to AASA, he can), someone at the Board table turned off his mic and the Board president banged her gavel and reprimanded him. Here’s LIttle’s response:

You are more outraged that I named this individual than that she named my people. Black people are not monkeys! You know who else is this person? Madam Superintendent’s husband posts on Facebook that Black people are monkeys! You should all resign…Ahmaud Arbery was lynched in Georgia, your husband [William Hugelmeyer] posts this and —don’t cut my mic off— says, ‘he must have been out jogging again.’

Little’s mic was cut off because, presumably, his time was up. Meanwhile, several Elizabeth City community members have sent me four posts from Superintendent Hugelmeyer’s husband’s Facebook feed. The first confirms Little allegations. You can make what you want of the other three. COMMENTARY: What Does Education Law Center Have Against 8,500 Newark