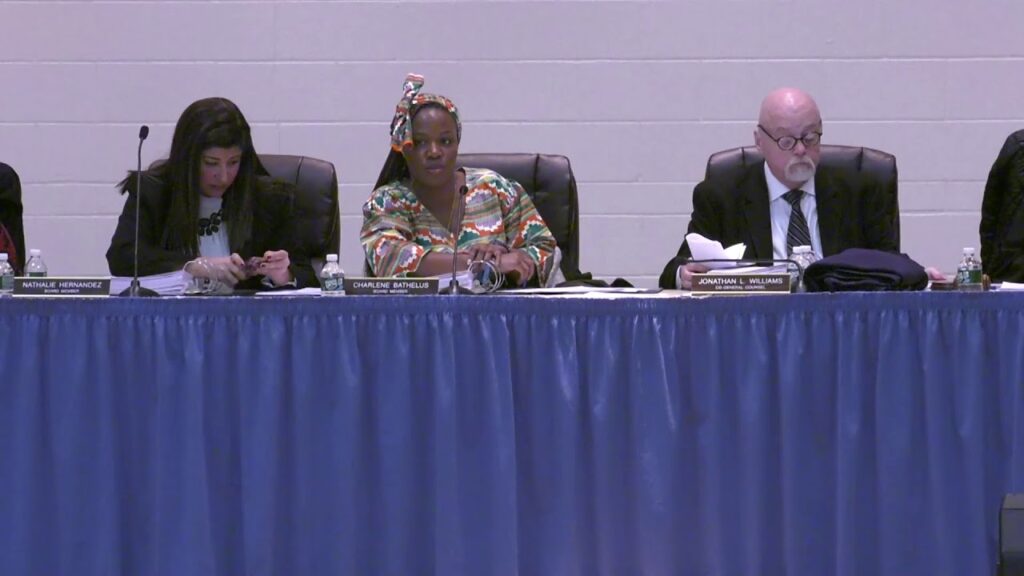 During the 60-minute public comment period, parents, teachers, and students stepped up to the microphone one by one to accuse New Jersey’s third largest district of denying students with disabilities their educational rights; issuing overly-harsh disciplinary measures, ignoring the needs of LGBTQ+ students; treating teacher contract negotiations as a “charade;” and hiring administrators without proper certifications.

Here is a catalogue of complaints culled from the public comment period.

One mother reported to the Board that her daughter had received a total of four weeks of suspensions. During one incident, the girl’s phone was confiscated and searched; when she protested and asked for staff to call her mother, the request was denied. Her daughter has a 504 plan, part of the  U.S. Rehabilitation Act of 1973 that requires schools to accommodate students with disabilities. When a doctor added several accommodations to the 504, a district supervisor told the mother she would need to “prioritize” her daughter’s needs because otherwise “the teachers won’t follow them.”

Students described concerns about school safety, school culture,and LGBTQ-bullying. One student said, “safety is being able to send my 12-year-old brother to school without worrying about him,” relating how police are often summoned instead of social workers. A high school student described a lock-down where 50 students were divided by gender and searched. “As a student I had no say and neither did my parents.”

Another student, who noted that May is Mental Health Awareness Month, charged:

The fact you guys say you care about our mental health is outrageous. That is a lie and not a fact. Instead of learning we’re out here getting panic attacks but you only care about your jobs. I’m disgusted. I feel like I’m in prison. This is unacceptable. Train your staff to handle mental issues properly.

One student said, in regard to the principal who referred to Black people as “monkeys,” “I came to congratulate you on finally listening to the Black community but instead I see you’re supporting someone who harbors ancestral biases. Here we are still forced to face the same [oppression] as our own ancestors did.”

Leaders of the Elizabeth Education Association approached Hugelmeyer and the Board. “We’re tired of being unwilling participants in your charade,” one said, referring to long-stalled contract negotiations. “You have words but no actions.” Another teacher: “We just celebrated Teacher Appreciation Week but I don’t know a single teacher who feels appreciated.” One educator pleaded, “as leaders of the Board of Education, lead! Break away from those political strings!”

Elizabeth’s special education woes have been much in the news, largely due to the advocacy of Maria Lorenz, a parent of two sons on the autism spectrum, and Luann Breese, a former special education teacher in the district. During the public comment period Thursday, several parents of students with disabilities complained about the district’s alleged disregard of their children, which Lorenz has encountered firsthand: for instance, Lorenz’s younger son has severe allergies that require an adult to administer an epi-pen when he has an attack and Lorenz and her husband had to fight hard to get the district to comply with their son’s medical needs.

Now the Lorenzs want an independent evaluation of their child’s needs (which districts must provide) but their request was denied. When Lorenz asked Hugelmeyer directly for the evaluation, “we got a response from your attorney. You’re spending taxpayer money on attorneys! Instead of being professional, you decided to be a coward.”

Lorenz was gavelled down and her mic was cut off because, the  Board president said, she used the name of an administrator. (See here for why that policy is unconstitutional.) When her microphone was turned back on, Lorenz concluded, “You’re not from this community. I’m shocked and amazed that this district talks about respect but doesn’t give it. You’re all cowards and you’re spending our tax dollars unnecessarily.”

Luann Breese then made a statement regarding “21 administrators who are not qualified for the current positions they hold.” (During Breese’s time at the mic, Lorenz walked through the auditorium displaying what she said was the documentation.) Addressing both Hugelmeyer and the board attorney, Breese said she had contacted the Department of Treasury with respect to “fraudulent monies that have been entered into the pensions system…You have destroyed my career but you will never stop me from getting to the truth.”

Breese’s full statement is below:

My name is Dr. Luann Breese, a former teacher who was forced to resign due to the illegal activities that take place in the special education department within the district.

I have in my hands the documents that prove 21 administrators are not qualified for the current positions they hold. They get to make policy and set precedent for teachers, students and parents while violating NJ state code for administrators. I’m curious with respect to the ramifications and consequences imposed on the district if former teachers who worked here and were given poor observations, resulting in a loss of a tenured position, would feel, knowing their observations came from someone who didn’t hold the proper qualifications according to New Jersey Administrative guidelines. How about all the current teachers who have been placed on a corrective action plan and were also observed by an administrator without the proper credentials? I can only imagine the anger and frustration they would feel knowing they could have had a job or received their increment, if only their administrator was qualified. I believe many a lawsuit would be filed if they were made aware of the extenuating circumstances.

Mr. Williams, I wonder how you defend someone against holding a position they are not qualified for? The law is clear in NJ about the requirements for administrators. Not sure anyone here is clear about the rules but I am clear and have made it my mission to prove how people have obtained positions, illegally.

The inescapable question I have is as follows: who in fact signed the documents, providing Edument with the paperwork that proves these employees are qualified to hold the position they currently occupy in the district? It has plagued me for years. I will however, OPRA request those documents from the State department.

Please note, I have contacted the department of Treasury with respect to fraudulent monies that have been entered into the pension system. Once reviewed, they will forward their findings to the attorney general’s office and the department of education. Via “We Raise New Jersey,” Some Context As The State