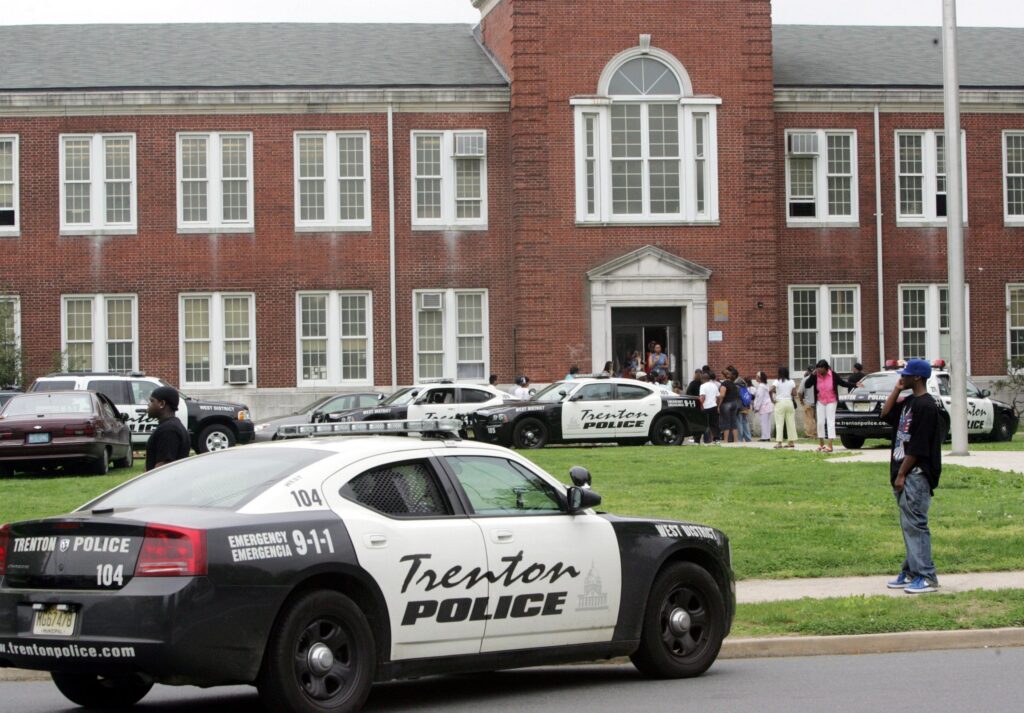 L.A. Parker of the Trentonian says nothing has changed at Trenton Central High School since 2005 when Mayor Doug Palmer said to a crowd of students, “we have a problem.” Palmer was referencing an incident when police used pepper spray “to disperse hundreds of students outside the Trenton Central High School West Campus” after a riot; Parker recommends that current mayor Reed Gusciora hold a similar meeting because “what’s really amazing is that we appear trapped by similar situations from almost 17 years ago”: last week a group of students from Central High’s Ninth Grade Academy “produced a madding crowd on Perry St. and one attack worthy of professional wrestling cage matches on a side street as students put a sad punctuation mark on education year 2021-2022.” In the end, a 13-year-old was pinned against a chain link fence as six other classmates kicked him in his head, face, and body. The school’s response was to threaten police action and beg parents to discourage violence.

Parker notes that there is no violence at the city’s public charter sector where the footprint is frozen because the Murphy Administration has rescinded previously-approved expansions.

Meanwhile, the status of Trenton Central High students, currently housed in a brand-new $155 million facility, is this: 40% of student in 2018-2019 were chronically absent (the last pre-covid year), 20% of students are proficient in reading, and the state hides the percentage of students proficient in math “to protect student privacy,” which means it’s less than 10%. (The numbers are the same for 2020-2021, except the graduation rate dropped from 77% to 75% and the chronic absenteeism went to 74%, which may be covid artifacts.) On the Start Strong assessments given last fall, fewer than 10% of Trenton High 10th-graders were reading proficiently; 83.3% received the lowest grade, “needs strong support.” Every student who took the proficency test in algebra 1 “needs strong support.”

The party is over.

That was the message made clear by the mayor of Trenton to city public school students who have been disruptive and education leaders who have failed to provide students with necessary tools to succeed academically.

“When I get involved that means it’s a problem. I need the citizens to understand that as the mayor, I’m not going to tolerate this,” the mayor warned.

Those words did not fall from the mouth of current Mayor Reed Gusciora. No, that’s former Trenton Mayor Douglas H. Palmer speaking in 2005 — and not on the final day of school either — after riot police used pepper spray to disperse hundreds of students outside the Trenton Central High School West Campus.

The Times of Trenton report noted Palmer’s pissed off mood while Superintendent James “Torch” Lytle agreed the District had a responsibility to provide a safe learning environment.

“If we’re not doing it, we’ve got to do something about it,” Lytle told The Times.

While most mayors stay clear of education matters, although Trenton mayors appoint school board members, they must get involved when student and faculty safety becomes an issue.

In fact, Gusciora should hold a town hall meeting with Superintendent James Earle and community stakeholders to discuss current security matters and how the city should prepare for the education 2022-23 school year.

Honest people know that an unusual amount of fights have occurred in several city schools throughout the school year.

Believe the big lie that fights always occur on the last day of school if you like. If that were true, then common sense would place police and security in schools throughout Trenton as classrooms close for summer break.

Plus, no fights were reported at charter schools. One could make a case that schools such as Foundation Academy or STEMCivics enroll quality students who have better parents, or perhaps, behavior ranks as part of the curriculum.

A belief here supports a mission to make behavior, respect and accountability core values for all K-12 public school students.

Of course, social skills are first learned at home where parents shape behaviors. Teachers should not be burdened with laying foundations for social skills.

Recently, I waited on the sidewalk for a takeout order from a seafood restaurant. A young African-American teen approached on his bicycle. He popped a wheelie as his bike came directly toward me.

Felt incredibly bad — for him. His distasteful command showed a disconnect from the history of our country’s most distasteful words.

We have to change strategies regarding youth, especially with young boys. Teaching them and reaching them requires interaction — not distancing.

Council President Paul Pintella said council members should accept some of the blame but the District and Board members were more responsible.

And, West Ward rep Annette Lartigue said other issues needed to be addressed before real learning could take place.

What’s really amazing is that we appear trapped by similar situations from almost 17 years ago.

Anyone with solutions or good ideas should send their suggestions.

(Photo courtesy of Times of Trenton.)