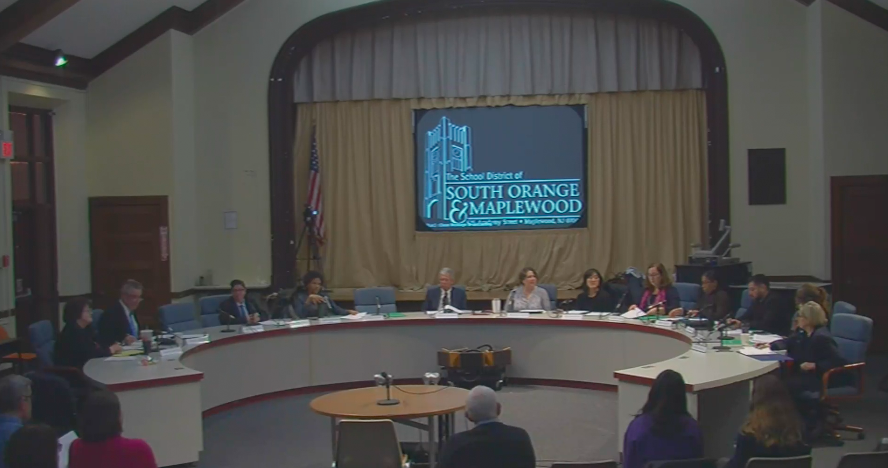 South Orange-Maplewood Public Schools District (SOMA) is known for its fine schools with students performing well above state averages. Like Montclair, also in Essex County, the community struggles to rectify segregated classrooms, particularly at Seth Boyden Elementary School which, historically, serves many more of the district’s Black students (who represent 25% of district enrollment) than the other elementary schools. Years ago, with the support of parents and residents, the school board signed off on a plan called the “Intentional Integration Initiative” in order to address structural racism and the disparities in outcomes between white and Black students. This plan allowed families from the more affluent (and whiter) sections of the district to opt-in to Seth Boyden with the promise of a daily bus. Despite the downside of not having neighborhood schools, public criticism was absent.

This changed at Tuesday’s four-hour school board meeting (video here) where parent after parent came to the microphone to voice their anger at the school board for putting their children in danger.

These parents are plenty “woke” and their concerns have nothing to do with race. Back in April 2021, when no one was paying attention, the board passed Policy 5120 which, starting this September, eliminates busing unless your elementary school-aged child lives more than 2 miles from school (the state minimum standard for school-sponsored transportation). Yet  parents say they didn’t find out about this change until they received an email on July 5th that begins, “Recently we were alerted that due to a technical error with our School Messenger system, this letter which was originally sent to affected families via email on June 16th was not received.  As a follow-up and update, we are resending you this letter to inform you that according to our records, courtesy transportation for your child(ren) ended on June 24, 2022.”

To top it off, just last month parents filled out their transportation forms.

In SOMA, some elementary schools begin the day at 8:45. At Seth Boyden, the before-care programs is full, making this is a tough nut for parents to crack, especially as many work in New York City (a 45-minute or so commute) and the district, a densely populated hilly suburb lacking thru-streets due to train tracks for NJ Transit, isn’t friendly for young walkers.

And there are no exceptions. From Policy 5120: “The Board of Education recognizes that well-intentioned efforts to accommodate families can yield unintended consequences that manifest in inequities. Accordingly, other than ELL status or special needs indicated in Individualized Education Plans or 504 Plans, the district shall make no exceptions to the district’s student assignment method. The Board of Education directs the superintendent annually to present metrics that represent how the student assignment process is achieving equity.”

There are currently two petitions circulating, one with 1,100 signatures that demands busing for any child living more than a mile from school (“the District cannot, and must not, assume that every SOMA student has access to a ride from a parent or caretaker, twice a day, for the entire school year”) and another with 200 signatures that demands the district do a survey to ascertain “how many families need a bus and to consider elementary students’ lives in a comprehensive, thorough way that includes how they get to and from school.”

It’s worth noting that Policy 5120 requires the district to “monitor and respond to students’ and families’ experience” by administering “twice yearly ‘Experience Surveys’ in January and May throughout the multi-year implementation of the Intentional Integration Initiative.” I’ve been told there have been no surveys. If that’s true, the school board is in violation of the policy it passed last year.

Here are some comments from Tuesday’s board meeting. The discussion about transportation begins at about the one-hour mark with Board president Thair Joshua trying to preempt some of the objections by saying the district reached out to people on multiple occasions, including discussions with the police department. “Any assertions these conversations haven’t occurred is incorrect,” he says.  Then about 30 parents speak  (some cut off by the strict 2-minute rule), some in person and some through Zoom, about their concerns. One said he’d filed a lawsuit.

NJEA: Our Teachers Are Sheep