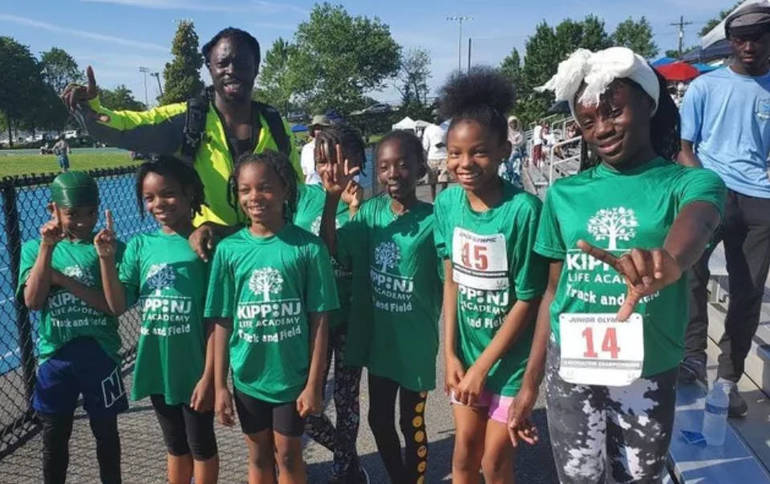 The New Jersey Children’s Foundation announced today that it would provide a $10,000 grant to KIPP Life Academy, ensuring its track and field team will be able to participate at the USATF National Junior Olympics. The team is coached by Rilwan Adeniran and will now have the needed funds to travel to the event this week in Sacramento, California.

The KIPP Life Academy “1st Track Club Speedsters” is in its first year participating in track and field and competing against other 3rd and 4th grade teams. The school doesn’t have a formal track so students had track practice in the school hallways and local parks during the school year. During the last year, the team dominated their competition, winning every event they attended and winning races ranging from the 100-meter dash, 200-meter dash, 400-meter dash, 800-meter run, 1500-meter run, and the high jump. To get to the USATF National Junior Olympics, the team competed in the New Jersey regionals, where each team member placed in the top 5, qualifying them to go to this week’s National competition in Sacramento, California. Unfortunately, without the budget to travel across the country, the team had set up a GO FUND ME page to to help cover the cost of travel, however, in the days leading up to the event the team were well short of the funds needed.

“When the New Jersey Children’s Foundation was made aware of the current economic challenge in sending this great team to Sacramento, we acted quickly,” stated Galen Johnson, Director of External Affairs, New Jersey’s Children Foundation. “We can think of no better group of students to represent our city. We wish them luck in the competition. We ask them to do their best. And today, as these Newark student-athletes depart for Sacramento, we stand united to celebrate their great accomplishments.”

“The dedication and talent of the “1st Track Club Speedsters” is a story of great inspiration, and we are so thankful for the support the New Jersey Children’s Foundation has provided these great Newark student-athletes,” stated coach Rilwan Adeniran. “During the winter and spring, these students would train inside in our school hallways. This is our first year in competition, and we could not be more thrilled. We are all so proud of our students’ great accomplishments during the last year, feel blessed to be able to compete in Sacramento, and embrace the responsibility of representing all of Newark in competition.”

Through the New Jersey Children’s Foundation donation, the entire cost of airline flights, hotels, and on-the-ground transportation will be provided for six student-athletes and two chaperones.

Happy Holidays to All